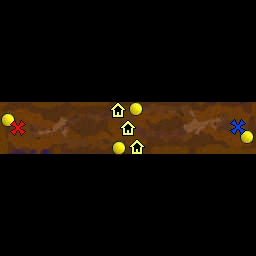 This bundle is marked as useful / simple. Simplicity is bliss, low effort and/or may contain minor bugs.
View usage Statistics Legacy download
First, this is my first melee map ever. Eventhough I'm not happy with it, I upload it for a mod & public review. So any critic is welcomed.

For the map: 1x1 melee map with narrow way /yes, it's indeed a 1 route map, but later in the game you can alter it/ and trees blocking half of your routes. However, the wood resources are not enough even for 1x1 map, so this map can prove quite fun and hard to play, especially in multiplayer. There are 4 gold mines and hard creeps in the middle, so time may pass before your first raid on the enemy base. Enjoy & Comment

You even use blizzard cliff, which are rather ugly. Blizzard cliff could look nice as well if you know what to do with it, unfortunately it was leave at blank and this map it completely bad.

Although it was approvable, the quality is very close to rejection. You need to make a lot of drastic changes if you wish for it to stay at this site.

Road was extremely narrow as well and could effect performance of AI. I won't vote for it to be approve or neither be rejected and let the staff decide about it.

Skins 6 Maps 6
Thanks for the critiques, hope it's better now.
You must log in or register to reply here.