Icons 2 Maps 1
I do realize there are several other warhammer 40k requests out there, but theres been no development in them, and they are quite old,(between 6 months-1 year.)
So basically if someone could make:
1.Space Marine w/bolter
w/Heavy bolter
w/Plasma Gun
w/Missle launcher
w/Chainsword or Combat Knife
w/Flamer
w/Morph animation where they put their weapon (only for bolter) on their back and draw either a chainsword or combat knife
Chaplain, Hero, w/Crozium Arcanum, and Storm Bolter, 1st attack is melee, 2nd is storm bolter

I dont want to do attachment points and then put in sound effects and all those triggers.
2.Imperial Guardsmen w/Lasgun with a bayonet 2nd attack shows them lunging
w/Flamer
w/Grenade Launchers

Before you ask Gen.Frank, I'm making a Custom Campaign, of sorts, with these units.

Icons 2 Maps 1
1st 2 are pics of Space Marines, then flamer, then plasma gun, and heavy bolter.

It should include also your project's pics.

Icons 2 Maps 1
uh yah, bout mechman, you see, my parents took away my laptop since i was "playing warcraft 24/7", and took it away for like 5 months. Now, i just got my laptop back yesterday, so im planning to redo my current warhammer project since it sucks. alot. so, if i get done with some of my terrain and some models, ill post a few screenies. hopefully XD

Models 6 Icons 2 Skins 2
Ah. Making a Firewarrior skin for no reason. You can have it after I'm done.

Icons 2 Maps 1
really? where? i heard you had it mech man

Icons 2 Maps 1
bump once more. i figured i could use mechmans tau and guard vehicles (altho they are loq quality) but they will do. cmon people, i kno atleast 1 person is hiding a warhammer 40k marine from me

Models 6 Icons 2 Skins 2
There IS a 40k marine already in the resource section, made by [email protected]

Icons 2 Maps 1
err... no there isnt...there used to be a space marine helmet, but the normal marine body doesnt really fit with the warhammer 40k marine body. nother bump

Icons 2 Maps 1
bump. pm me if youve got any models.

Icons 45 Packs 1
have you tried PMing Pyramidhead? He started making a WH40k marine.

Ummm i can't model for a piece of imperial guardsmen(me hungry, me tyranid!)

tho i do know there is a carnifex and hormagaunt model in the models section.
Hopefully this helps.

BTW if you don't put genestealers in alot of people will want to kill you. Its just i don't know if there are any models that could ever look like good ol' 'stealers.

EDIT: You may want to use the UTN units in the models section for guard, and btw wat about orks!!!!! Plus a few other models i can't think of that would work.

EDIT:
This be a tyranid termagant for those who didn't notice.

Necrons! There are 2 good very necron models in the models section. 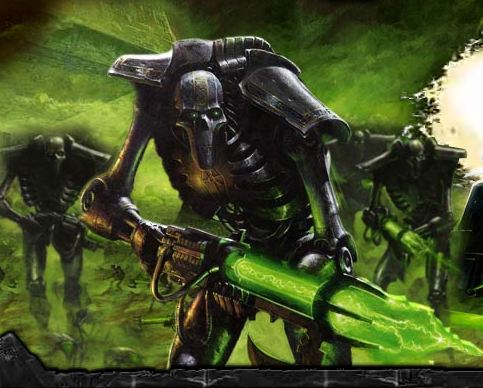 Icons 2 Maps 1
yah, i got the hormagaunt, and the carnifex, but the UTN guys....just look... unguardsman like. no offense. however, i am thinking about putting in chaos, i dled a defiler from the models, i just need space marines!!!!
i defietely need some genestealers, and some termies, but the beginning part of the map requires drop pods that have been deployed, and non deployed

If I join this project, can i have a copy of the map so i can help?
Utn guys are unguardsmen? KK i have a snoop for some models for ya.

EDIT: I would use the normal warcraft marine model for now. Then you can do some screenies and people are more likely to make models for ya.

I got icons for ya. An icon. I'll get more eventually but here it is a hormagaunt icon.

should be one on the carnifex too.

I'm making space marine models, but I'm not going to give them to just anyone... I don't want them to be the key piece of an otherwise crappy map, I'd rather just make the map myself. Have you done anything so far to prove that you are even making this map/at a decent standard??

well i put a post somewhere requesting warhammer40k models, and the minimum was a 'stealer (good ol' 'stealers), a termagant, and a spacemarine.

Icons 2 Maps 1
ugh... i havent checked this out in awhile. Well... ive been thinking about it, and i just might make this into an AoS, it seemed like a good idea, and if i could get voice-overs and all that stuff, it could work out. Ive deleted my original map since im doing an AoS, but ive still go the carnifex, defiler, and termagaunt models.
Murder, your marine looks real nice, but i suggest raising the backpack up a notch, to the point where the top of the pack reaches near the top of the helmet.
Im gonna send a long delayed pm to pyramid head as well

edit:alright roy, you could be quite useful... do you have any experience on triggers?
i havent yet explored wc3 triggers, but i did do some stuff in starcraft

im just popping ideas but here are some hero ideas for the AoS:
Heavy Weapons team, they could like "burrow" and gain extra damage but be immobile
Of course the Regular Marine,
Assault marine
chaos marine
Guardsmen, since guardsmen are known to be weak, i might give 2 heroes as the guardsman
GREY KNIGHTS! we need to have those...
Chaos Sorcerer that can turn permanently into a Daemon Prince at a certain lvl like 15 or something

I havent decided on a name...
I think it should be sorta like good vs evil themeish... so like Tau,Eldar, and the Imperium vs Dark Eldar, Chaos, Tyranid, Necron etc.
Any ideas are accepted
Last edited: Apr 20, 2008

hey ghost! i found a spacemarine model! [email protected] did make one! its in the waste/paste bin part of the forums!! i checked it out yesterday and its available for download!

BTW i can do triggers for you. I'm quite good. Check out my starship galaxy post and map in the work in progress section.

Yes i can do triggers. I'll start immediately. Do you mind if i start with 'nids though? after i've done some triggers for scoreboardish (maybe) and some space marine. Do you want a fleet of claw ability?

I gonna do that heavy weapons burrow thing. the model testing it out won't be a heavy weps team, coz i don't have any models like that, so i'll use a Konstrukt and its go prone animation kk? then i'll do scoreboard and sentience

the necron model is called a destructor. Its in the models section. you should check it out. BTW can i have a copy of this map if you have started yet to check it out and see what i can do to help?

I have a kharn the betrayer model if you need one, could be used as a khorne berserker I guess. Uses grom hellscream animations.

Icons 4 Maps 4
I have an extensive knowledge of warhammer 40k and it wouldn't be smart to create a project based off that because of all the resources you would need, map size would be ridiculously big.

Icons 2 Maps 1
whoa whoa whoa! sudden burst of energy!
ok, i got the marine model, i have both the copy and paste one and the Version 5 Space marine. ive created a test map, and made the V5 marine into a hero.
Right now, i added a "Crouch" ability to the marine, and an Inspiring Aura(Command aura) to him aswell.
I think i could do the terrain as well...
So im thinking of this: 3 lanes, middle and top will be overland routes, and while middle goes through open area, top lane goes through this mountainy area. Bottom lane is gonna be way different. We should make it like a sea or lake, that only air units can cross. So bottom lane will spawn like Thunderbolts/Chaos Marauders and such, and heroes can enter a hangar where they can choose an aircraft to pilot.
I also think we should make Mana in standard units Morale. So All units would get feedback to "kill" morale, and if morale reaches 0, that unit gets like -20 percent armor and damage or something.
I suck at triggers btw.
And another thing, do you have the Carnifex model thats in Hive?
And private message me! we dont want to spill all our plans now do we?


DKG, we need that, i dont have any chaos units other than a defiler that i dont know what to do with.

Berries, dont be so negative, im sure we'll figure something out.

Icons 2 Maps 1
BUMP anyone have Guardsmen?

Maps 2
You're bumping this thread too often. Chill.

Icons 2 Maps 1
Cooling down... deep breaths. Ok some new stuff:
1. Done some of the Terraining, added a "secret" shop, and a few caves to jump around the map. I havent done much on triggering and units yet, but ill do that as soon as i get models

Can we atleast SEE some Terrain? That's probably why no one's making a model for you, on top of the fact that you spammed "bump" all throughout the thread.

such a desperate act will probably not get you anywhere

Hmm...I have an extensive knowledge of Warhammer40k. If I could be included in the project as well, I could create the guardsmen and/or tyranids you are looking for. It could take me awhile, so let me know ASAP.

Models 32 Icons 3 Packs 1 Maps 5 Tutorials 1
if you looked around, you would see that the Burning is making a guardsman.

Models 38 Icons 11 Packs 1 Skins 1
I will probably release the guardsmen (lasgun, maybe flamethrower, maybe grenade launcher). The melta and the plasma have to be improved, because they're hard to differentiate them.

I'm not very hot to release the space marine, as I said I won't release the models before my project is over. (this project is a campaign first, then i'll work on something bigger)

If you share some pics of your project in PM, I will probably let you use all of my models (subject to get credits, of course).

As I have said before to this guy. No screenshots, no models. Savy?

Icons 2 Maps 1
Yes i get it. First off, tell me how to do screenshots XD
I remember hitting a random button on accident in wc3 and saving a screenshot, but i only have a vague idea on how to retreive it

Prnt Scrn, it's on your keyboard, you can't miss it. Afterwards, open up paint and click on the center of the screen. Then press ctrl+V and it should pop up. Save it. Now upload it.

Icons 2 Maps 1
Alright mate, ty.
Ill upload the pics as soon as i get some more terrain done, and after im finished with finals (this thursday)
EDIT: Hm... I tried uploading an image using your process, but it didnt work. I entered my game, pressed Print Screen, went to paint, and did Ctrl-V, and it came up. When i uploaded it, it says that .bmp isnt a valid file.
Last edited: May 27, 2008

Icons 2 Maps 1
hmmm, ok. btw, i saved a whole bunch of pictures of a castle i made in an RP, isnt there a place where they are all saved and i can withdraw them from?

Icons 2 Maps 1
Sorry, for double post, but got some pics :
1st one is the "secret" shop
2nd one is one of the caves found throughout the map that let you easily move across to other lanes/spots