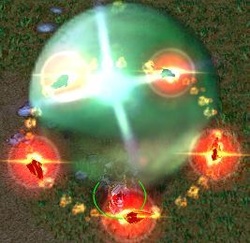 Earlier today, I read a comment from HammerFist saying "Personaly I dont thhink to ur spells could be usefull for anykind of pvp maps, but I think to they would be awesome for some boss fight and dungeon stile maps."

I happen to agree, I certainly don't tend to make spells which are "small" enough as it were, for PvP use, hopefully this will make a bit of a change to that, my first single-target spell (although does have AOE damage. Because reasons) which I think would fit my purposes for both a PvP spell, but also still quite nice for a boss battle.

Tooltip
Summons 5 Flaming rocks which mark a target for a volcanic energy bomb. The bomb will grow to a critical mass, and then fall onto the location of the target. Can target both enemy and friendly targets, though only damages enemies.


Give credits if you use this spell in your map, and enjoy.