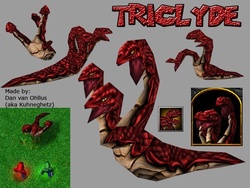 Description:
This three-headed snake works for the evil King Wart and uses his fireballs to attack his enemies.
He only appeared in Super Mario Bros. 2 (Doki Doki Panic in Japan) and The Super Mario Bros. Super Show.
In SMB2, he acts as a boss in the second world and the sixth world. The best way to kill
Triclyde is to throw heavy mushroom blocks at him.
In the cartoon show, Triclyde assists King Koopa (aka Bowser) to
stop the Mario Brothers in some episodes.

Model description:
Both the model and the textures is based on the Wc3 Hydra unit.
Legs removed and animations altered to fit the character.
Texture uses manipulated colours, plus some freehand on the highlights, the pupils and the removal of team colour (the purpose of this model is to use it as an enemy boss unit anyway).


GIVE CREDITS IF YOU USE THIS MODELS IN YOUR MAP!!!

Moderator
18:27, 30th Nov 2009 DonDustin: the changes are all in all pretty minor, but it could be recommended for Mario maps or could be useful for any other genre. But it would have been nice if you would not have removed the legs as people might have found...
Read full review...
Reputation Statistics
Show Ignored Content