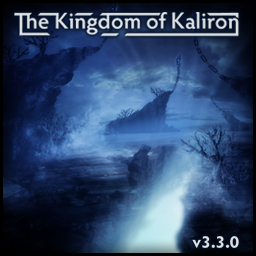 This bundle is marked as director's cut. It meets all expectations and excels in every regard.
View usage Statistics Legacy download
Reactions: 久与未, Azotamentes, syponis and 65 others
3.3.0f - The Bringer of Tears
And so, our heroes are now standing victorious on the mighty Ancient Hydra. But not every secret of Outer Temple got uncovered by them. The last and the most powerful one, Ortakna, the Bringer of Tears, waits them for the challenge. Will Ortakna fail or the Heroes of Kaliron be banished forever by this ancient creature?

Even more System Improvements - By Duos

Map Info View Resources In Use
Reviews
17:09, 21st Dec 2009, by Rui: TKoK is, in my opinion, the best RPG out there for Warcraft III. Check my review here. Reviewed and rated 5/5 (Highly Recommended) with a Director's Choice award.
Read full review...

Spells 2
Best map ever no suggestions

Icons 5 Maps 1
Wow this is really impressive. Easily the best RPG I have played for war3. Much better than Nickba's and dare I say it, Dark Invasion 2.

Maps 2 Spells 2
Getting to level 8 in a public game is near impossiable.

oddsocks said:
Wow this is really impressive. Easily the best RPG I have played for war3. Much better than Nickba's and dare I say it, Dark Invasion 2.
Click to expand...

I'd have to agree, though Dark Invasion II is unique, it is very complicated, I've had a freind turned away from its complexity and I get roflstomped so hard cause I have no clue what's going on.

I was waiting for this release! I love this map! Thanks a lot for such a PERFECT map!

Spells 2
Save/load is a mega fail anyone with character names over 10 in length will not save i lost a level 8 cleric and a level 8 warrior thanks to this BS!!!

working on fixing this along with 2 other minor issues

Icons 1 Spells 3
Wow, simply amazing! Everything is flawless, I mean you have a very good damage system, an amazing equipment system and the talent tree addition is fantastic.

Simply the best RPG I've every played. Kudos to the team and +REP for sure.

hey guys.. can somone tell me 1 thing? in this beta can save from lvl 8.. i hosted this map wiuth my 3 friends... we played map.. all get 8 lvl.. bet than my 2 friends got d/c thna i was in server i am red and my friend was blue... he ot to saver click save he got code.. when i try do that i not saving.. first time i click nothing happen thna i click second time and its say only one per 10 minutes can save... so... is that a bug or only red cant save?... help..

Have to play on harder difficulty to level up my knight before going back to normal and take care of broodmother.
Annoying if I will have to do this for every hard boss there is

Oh well, besides hard difficulty, its the best RPG to wc3

So once again, make broodmother a bit easier; -1250 life and I think Im able to kill it, BARELY if I buy evasion elixir, potion & Healing wards.

Fighting bosses in single player is like trying to solo a Heroic dungeon in WoW, not possible

Vexen.X said:
Game was not designed for single player and I am only allowing single player in the beta for people to mess around and explore.

Fighting bosses in single player is like trying to solo a Heroic dungeon in WoW, not possible
Click to expand...

I like to play single player, no arguing about items

Waiting for PheoniX_VII to get home to update the uploaded copy, but 3.0.2b is out, should fix the remaining save/load issues with some other things

just posting to mini-moderate this awesome map for you
so that it will be fast in the approved section!
great work!

There isnt any bug i cant fix =P

I tried to do it again but couldnt so im not shure whats causing this.

ppl playin solo im ganna give u out a secret. it worked agains bosses who come 2 at once. Take rouge, n lvl his dodge abillity. BOSS shall miss most of atacks. worked before
but u have to play as a rouge
OH VEX I FOUND SOMTHIN I THINK:
GJ vexx. oh the piromancers dragon breath has a lame range. i click on a creep,and she fires it, but only the closer creeps get dmged or sometimes none. saw u say u fixed the bolt but did u saw the breath problem????

Awesome awesome map, what more is there to say?

Was save/load system fixed? i know people had problems

Icons 1 Maps 8
This RPG is truly a gem. It includes Great systems, such as the talent and equipment systems, solid gameplay, and great execution. TKoK is a map that can rival some Standalone RPG GAMES.

But the problem is: 80% of battlenet users aren't willing to devote a lot of time into these types of games. Battlenet users look for the quick "15-20 minutes of fun" in WC3. Which brings me into some memories about Dark Invasion II. When ever I host that, I get bombed with "omg this is gay /leave" type users. The confusion and complexity of well made RPG's isn't what masses are looking for.

On a personal level, I can't get into these games either. Its just the feel of them that turns me off somehow, although I know that TKoK is most likely the best made RPG yet.

All in all, TKoK brings me to one thought:

Why are RPGs like Twilights Eve and say Heroes and Empires being hosted over these well made maps?

Honestly, I believe that the players don't get into this far enough to give it a chance. The slow start in most RPG maps is usually the death sentence on battlenet. Why would someone play "Insert well made RPG here" over a game that gives you the world and more at the start?

Maps 2 Spells 2
Heroes and Empires is not truly and RPG, may I remind you it has RTS parts to it as well.

Dr Super Good said:
Heroes and Empires is not truly and RPG, may I remind you it has RTS parts to it as well.
Click to expand...

Thats why I said "Say Heroes and Empires"

It has tons of RPG elements to it as well.

Its all based around the way you play the game.

Me and my 2 friend played this yesterday( it was 3.0.2a) we were playing warrior/cleric/chaotic knight and all of a sudden we started doing damage of 2k-10k on cave monster (well not really but the text was saying that) and everytime we were missed or we were blocking we were geting fully healed. I didn't try it on 3.0.2b so im just saying...

Vexen, yesterday i found a great bug. My bot wasn't saving the replay so i lost any trace of it (sorry!).
While i was attacking some mobs, the damage shown started to increase on every consequent hit i made. If i stopped attacking and started again, it just resetted and started again to increase. It shown sometimes some 4k+ critical dmg!!
At first it was only the ubersplat, but then the real damage become that hard! I mean, i killed the broodmother with 6 hits! (the last ones harder than the 1st)
Do you have any idea of this increasing damage bug?
PS: I was a ranger lvl 7, and was playing 3.0.2a just in case you already repaired it.

not released yet, but in the works

its kinda...... no fair.. if only with rouge char can play solo this map ;s.. i dont like rouge... only in WoW rouge is realy cool and very OP..... :s.... i cant find anyone in wc3 eurobattle.net they all want maps where is fun only few minits like aren maps.. they want play maps what can done in 30 minutes... how can its be fun? ;s... thna with warior no chance kill solo bos.. for quest?

wow... A lot of changes, but tbh, I don't really like the idea of getting all of the skills from talents. It would be cool if you had standard skills, and trough talents you could get better/change old ones.

I do hope that the new zones (gardens and catacombs) will be changed, cause they are at much lower lvl than everything else (gardens are just a one path... does not even look like zone, more like passage. And catacombs are just looking bad.

Btw, I had a problem with new reset system. Some packs would not return to the starting size after reset (Hagger pack 4 example) and in catacombs packs were reseting every time a mob in it was killed >_>

But I love the new cave and forest (apart from that look out point near Hagger, it looks... wrong).

This map, and it's predecessors, are some of the best I've ever seen, much less played. The gameplay, is, IMHO, awesome.

i consider the post above mine SPAM.
Vexen did you read the bug i reported?
I think it should be fixed, i killed the broodmother in 6 hits!

Bizz said:
I do hope that the new zones (gardens and catacombs) will be changed, cause they are at much lower lvl than everything else (gardens are just a one path... does not even look like zone, more like passage. And catacombs are just looking bad.
Click to expand...

Well the gardens is a passage to the Grave Yard and Catacombs, that's what it's supposed to be. And what do you mean by the catacombs looks bad, in what respect?

Vexen.X said:
Well the gardens is a passage to the Grave Yard and Catacombs, that's what it's supposed to be. And what do you mean by the catacombs looks bad, in what respect?
Click to expand...

I mean that gardens are really a step back... Compare them even with the first forest >_> And 'bout the catacombs.. 'cmon plain gray squares instead of floor and walls? It does not fit fantasy game, more like sci-fi.

Maps 3
I just played this with 7 people, they didnt want to play more after reaching lvl.6, they said it was to hard, we tried to kill broodmother but failed 2 times.

To get as easy as possible play ONLY 2 PLAYERS, much less fights about items and its better to have 2 awesome heroes then 7 bad.

CHA_Owner said:
I disagree on making it easier all you have to do is get 2 people who are level 10 doesnt really matter which classes but i used 2 warriors buy 1 elixier for both 2 health potions for both and a set of wards for both then just bang on him til hes dead

I'll try that, but since 6 of my players got scared of new TKoK I have to look for another one..

Srsly, finding players is really annoying, you should atleast be able to finish world 1 alone, yet hard, but able..
You must log in or register to reply here.

TKoK is looking for coder