Thunderfury, Blessed Blade of the Windseeker 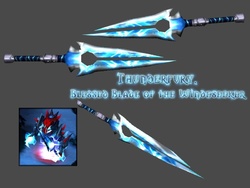 "Ragnaros the Firelord, and his lieutenants Garr and Baron Geddon, defeated Thunderaan, Prince of Air, during the war following the First Age of Creation. Ragnaros was unable to fully destroy Thunderaan’s essence, so he forced what little remained into a talisman of elemental binding and shattered it. He gave the two halves to his lieutenants. Ages passed, and somehow the talisman halves found their way into the hands of Highlord Demitrian, a follower of Thunderaan. He recombined the talisman but was unable to release his master. Instead, he did the best he could: He crafted a blade to serve as a vessel for his master’s essence.

Thunderfury is a vicious sword, crafted from elementium and containing a crackling electrical core that might be all that remains of Prince Thunderaan. The hilt is unusually long, wrapped in black dragon hide."

Please note - The screenshot is NOT accurate. In-game, there is a farseer's\shaman's missile in the "socket" and the lightning texture on the blade is animated. In addition, there is a blue omnilight emitting from the socket's center.

Attach to left or right hand.

HUGE thanks and credits to Zeverens, for making the awesome texture! Major props to him!

Give credits to me(Deolrin or Debode) and Zeverens if you use this model in your map. Do NOT redistribute this model in any way. I do NOT want to see it make it's way to sites like ''Warcraft III Unlimited''.

Moderator
17:26, 17th Sep 2009 shamanyouranus: Quite an awesome model, i must say. Looks great and quite accurate. Good job, both of you.
Read full review...
Reputation Statistics
Page 4 of 4
Show Ignored Content
Page 4 of 4