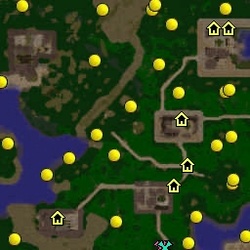 Please dowload Latest Versions to fully enjoy this game online and by yourself.


This is no run of the mill zombies game, this is a very open custom scenario where you can build you own camps and cities. There is no shortage of custom units either. Also, every person in the game is a potential zombie so watch out, because it only takes one zombie to take out an entire city! There are tons of things to do but mostly you just build cities and armies to try and destroy the undead hordes. Exploration in this map is key for your cities to thrive. Also, you dont have a time limit to win, you just play at you own pace and coordinate attacks with your fellow players. This is the second version of this map so other updates for it will follow. Ty and enjoy playing!

-created a hero selector
-Fixed health of walls
-Nerfed priest's heal
-Took away Divine Shield
-Decreased Hero level cap to 15 due to balance issues.
-Remember that this game is meant for Multiplayer, host it on BNET.

-Nerfed Heroes massively. They should all be balanced now.
-Slightly increased detail on terrain.
-The heroes now cost 100 gold and lumber a peice.
-Deleted archers on walls due to glitches in zombie attacks. (Build your own archers)

-Added Tome of Retraining and Searing Blade.
-Made towers able to be made by Workers.
-Made border guards drop Mutated.
-Nerfed john the swift.

-Added a lord zombie
-did some minor editing.

-Changed tooltips for several hero abilities.
-Changed Zombie Lords model.
-Added another zombie player to reduce lag.
-Now if you lose a town it causes the zombies to spawn more troops.
-reduced build time for most buildings.
-Added bounty for all zombies.
-Gave you more starting money so you can build a base faster.

-Buffed tower again.
-Got rid of starfall for jacob the stealthy.
-Gave zombies more health.
-Gave town watchmen more health.
-Made all abilities available by lvl 10.
-Buffed walls again.
-Buffed zombie lord.
-Decreased lumber cost of a few buildings.
-Made a new area in the moutains, it has orcs and a new item.
-Added cleaving attack to the Border Guard Knights.
-Debuffed tower
-Got rid of hidden tomes.
-Gave zombie lord cleaving attack.
-Added more resources at islands.
-Made a message saying when a player leaves the game due to me getting pissed off when they leave and i dont know about it.

-Added minor terrain changes.
-Changed icons for several units and heroes to add variation.
-Gave heroes more abilities and auras.
-Made all zombie spawns beyond the trenches.
-Did some minor editing of town defences.
-Could not figure out how to fix cathedrals not spawning zombies but i will next patch.
-Made more paths through trees.
-Got rid of gates.

-Minor Terrain Changes.
-Added a trigger that causes a large amount of zombies to spawn when you lose a town.
-Moved around a few units,
-Added more trees to some areas,
-Edited the *extra features.

-Made major terrain changes on cities.
-Added a 150 gold income per town that you own besides the main city until you lose that city.
-Changed the rat attacks into sewer dwelling zombie attacks.
-Added upgrades for all units and heroes.
-Added a Sewer Dwelling Zombie.
-Changed icons for builders.
-Changed Model Files for builders so people can tell them apart.
-Made less zombies attack but made the zombies better.
-Made all bowmen Better.

-Made better terrain on most parts of the maps.
-increased amount of gold in several mines.
-Greatly reduced latency by decreasing number of zombies and increasing effectiveness.
-Fixed the massing problem at the gate.
-Made you get 5 gold per villager rather than 2 after i realized it was way too little lol.
-Made most units build time faster.
-Buffed a few human units.
-Buffed almost all undead units.
-Added a new zombie *infected*
-Fixed minor spelling errors.
-Edited tooltips.
-Made you get a better view with the camera by typing -camera.

-Made zombies better again.
-Changed bounty for some units.
-increased gold in other goldmines.
-Fixed terrain up a little bit.
-Decreased build times.
-Increased food limit of knights from 1 to 2.

-Added a nightstalker unit for the zombies.
-Added lumberjack lodges in several highly wooded areas to help with settlement and exploration.
-Made a sea entrance to the undead city so now the sea is good for something!
-Made minor terrain changes.
-Made more zombies at undead city.

-Made border guard drop zombies rather than mutated zombies.
-Lessened zombie defense in some areas.
-Made healers much better.

-Added a help me system for people who lose their hero and builder.
-Greatly buffed all heroes health.
-Minor terrain changes.

Its a good idea to build an encampment first thing in order to create a city later on. There are open areas provided for a town but you can make your own if you get enough workers together to clear some trees.

You can get workers in the begining from the first towns cathedral. Most units in the cathedral are limited so its first come first serve. You can also get villagers that give you 2 income each but the first cathedral has a very small amount available so you'll need to build a city if you want to get more of them.

Exploring the map is a good idea because there are tons of hidden items and food supplies all over the map. There are also refugee camps all over the place and destroying their towns gives you tons of cash.

In the far lands of the southern kingdom, a beleagered king prepares his people for a desperate stuggle for survival. The undead came without warning and struck hard and fast. They took over one of his major towns to the Northwest.

Hundreds of desperate refugees crossed the border into his lands pillaging and killing at will. The zombies had destroyed there kingdom and now they intended to take what they could from others to survive.

The brave king acted quickly, sending the majority of his armies to combat the undead hordes, but this was a mistake. As they entered battle against the endless hordes, it went bad from the begining. Huge mutant beasts routed and slaughtered dozens of men at a time creating even more horrifying enemies to fight. A soldier would kill one zombie only to see his best friend turned into one coming after him. After he struck him down ten more would come to try and do the same. For every one you killed it seemed like there were three more. Every human they killed made the zombie ranks even more powerful. The soldiers could not take much more of this. In a little over an hour the entire army was routing from the zombies.

Thankfully, the king was no fool and had a backup plan. He had dug a trench along the outskirts of the battle in order to contain the imminent threat, the zombies poured upon the trenches relentlessly but were eventually held back and destroyed. With the ground full of dead soldiers and creatures, the king claimed victory over the zombies.


The trenches have held for three months now under constant siege. The king has called for aid from the neighboring kingdoms and eight kingdoms have answered him. The kingdoms only hope now lies in these noble kings hands. They need to push the undead back and retake the capital city in order to claim victory. The king needs your help! Will you answer his call?

-If you would like to host this map for me plz let me know in comments with date and time. It would be greatly appreciated.