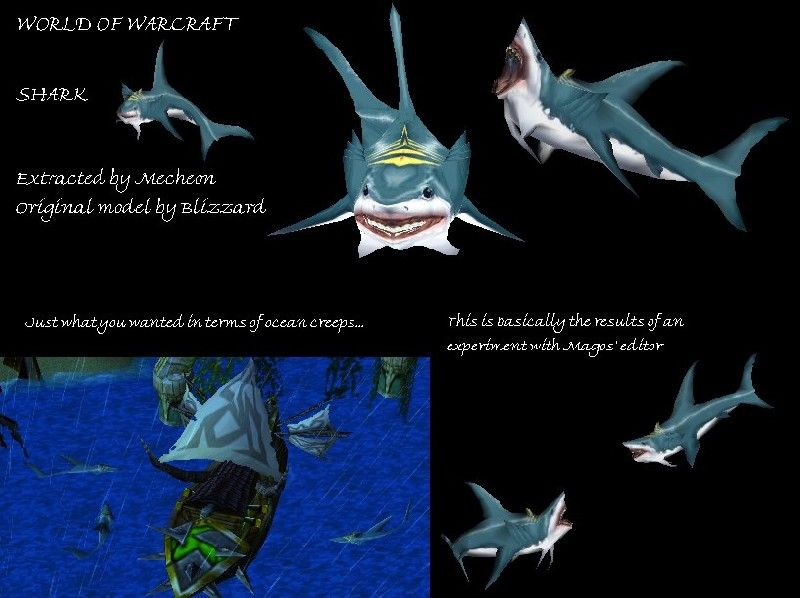 Models 13
Oh, just because I forgot to mention

I sunk this guy down a little so he makes a nice aquatic creep. You'll all hate me for it, I know

Not sure if the animations will play properly in water though. But they should

Models 114 Icons 106 Skins 14 Maps 1 Tutorials 3
ZOMG! I am forever indepted to you!! lol, well, not realy but I can realy make good use of this model.
I think I'll use it as base for a Dunkleosteus (what else?), Mosasaurus, Hybodus, Stethacanthus and Ichtiosaurus.

And for more fun, a six legged crocodile

doing this to piss off zombia? i think it will work

Models 13
Oh noez my secret is found out D=

But really, its more wanting to test the editor. I was originally going to modify the Onyxia or Neferaion model into a Bronze Dragon just to piss the hell off of everyone who wants either of those two horribly innaccurate models for their use

I'm thinking after I convert the orca and stuff for more modifications I'll grab Onyxia or Azuregos and turn them into the Timeless One himself, Nozdormu

Nozdormu? a WoW Character? or the one u use in Natures call Return of the dragons?

Models 13
Nozdormu is the Timeless One

You know the Caverns of Time? That's where he lives on Azeroth. He lives in a seperate realm though mostly, called the Desert, or Fields, of Time

You know of Deathwing? Also known as Neltharion, the Earth Warder, father of Onyxia and Nefarian? Neltharion is one of the 5 Dragon Aspects

Nozdormu is another of them

They're where Darky got the concept of the dragon whelps for RotD, but they're not the ones from RotD.

aaah yes Deathwing the one who died in battle with ragnaros an then Nefarian took over an want to kill Ragnaros Nefarian ''Blackwing lair'' an ye sthe chamber of times the brown dragon? the chamber of times will be unlocked in The Burning Crusade so will Blood elves i Think Alliance gets Naga but thats just me so Nozdormu was the Brown dragon who Protects the people From the chamber or is he in the chamber cuz there is a dragon in front of the stone.

aaah yes Deathwing the one who died in battle with ragnaros an then Nefarian took over an want to kill Ragnaros Nefarian ''Blackwing lair'' an ye sthe chamber of times the brown dragon? the chamber of times will be unlocked in The Burning Crusade so will Blood elves i Think Alliance gets Naga but thats just me so Nozdormu was the Brown dragon who Protects the people From the chamber or is he in the chamber cuz there is a dragon in front of the stone.
Click to expand...

You just killed a little part of my faith in humanity.

Firstly: Deathwing has never fought Ragnaros, he is not dead (to our knowledge) the last we saw him he was fleeing from the other aspects. Nefarion has simply assumed command in his father's absence.

Secondly: there is no brown flight in Warcraft. The five natural flights are the Red, Blue, Green, Black and Bronze flights and there is now the Chromatic flight created by the black flight who are a combination of the lot of them.

Thirdly: Naga... in Alliance... I... no wait, nevermind. I shouldn't need to explain why that is just so completely implausible.

well well well am sorry for saying Brown not bronze i ment bronze an as i know i have readed something about Deathwing fighting a war upond rag in blizzard's site in worldofwaraft.com but it is maybe just me an if u can say somthing to wasnt it the naga u allied in warcraft 3? bet it was they where under control by illidan an it was just a Tough but plz dont blame me for my thoughts an u can read the story of molten core / Areroth / the whole warcraft world the world was made by some titans who left the world to it's own domination. but i am not a genius so dont humiliate me. AH he blame me for knowing NOTHING damn

And in TFT it was the Blood Elves who allied with the Naga, who were later nearly executed for it.

And I don't understand what the rest of your post is going on about...

sorry my bad but wasnt it illidan who Control the naga? he does in the campagns? an i will use full stops more often,

an in www.worldofwarcraft.com u can read the history it's just kinda long,

i read this so called ''story'' an they mention Deathwing ''dead'' an it's not searnox am talking about.

Models 5 Icons 3 Skins 1
D-R-A-K-E, you can trust Xaran if the topic is the Warcraft lore, he knows what he's talking about!

Anyway, the comment section is for comments, isn't it? ;P

Back to Model: Seems to be well converted But I must test it still ^^

Models 114 Icons 106 Skins 14 Maps 1 Tutorials 3
When I wanted to make a Dunkleosteus out of it, I discovered that the model has no particles! SO, I had to make some first in order to make more good new models out of it.
Mecheon if you want I can send you the shark with particles version...

Even his children believe him to be dead

However, he feigned death that time and lived on to pose as a noble for a while, before the Demon Soul was destroyed and the other aspects decided to hurt him. Very much hurt him. Hence why he was last seen fleeing from them

And yeah, chuck me the particles

Oh, and if anyone wants this at normal height, for making an underwater map or simular, get Oinkerwinkle's Geoset Translater and raise it by 60 in the "y" axis

and can't you change the height in the world editor, if you just made it fly, then you would have no problem I think.

an btw it is a comment section, ill give u that
but was deathwing the dragon with a kinda Metal head in Wc2 in the last game of the Orc campaign where u got all the ''heros'' ?

Models 13
Yes. Deathwing was the dragon who got the goblins to weld metal plates to his body

Models 114 Icons 106 Skins 14 Maps 1 Tutorials 3
yeah and with the anims this model has a Hammerhead shark can easily be made.

Last thing on this topic, promise.

sorry my bad but wasnt it illidan who Control the naga? he does in the campagns? an i will use full stops more often,
Click to expand...

Yes but at that point in the story as Vashj says and is shown Illidan was not in touch with the Naga or in control of that group at that point. Also the Naga in TFT is only a small group of the Naga race.

And I see nothing in the official story saying Deathwing died.

Its just this model slightly modified. It even uses the same skins

Maps 2
hey whitehorn, the fog in ur screenshot aint really thick enough. I recomend making it a tad more dense to make it look more water like. Anyways, in whitehorns pic it looks more like a killer whale . . .

Models 2 Maps 1 Spells 1
This is a really good shark. Too bad about the custom texture.
You must log in or register to reply here.