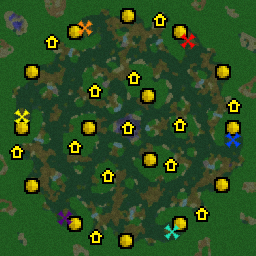 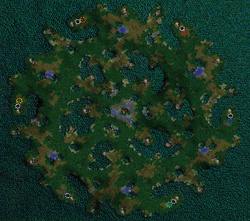 mafe
Well, I cant really find anything substantial to criticize. I'm not really convinced that the destructable rocks will make any differents, but due to the design, it's not really important. Congratulations on getting the map onto the w3champions...
Read full review...

Maps 10 Tutorials 1
Well, I cant really find anything substantial to criticize. I'm not really convinced that the destructable rocks will make any differents, but due to the design, it's not really important.
Congratulations on getting the map onto the w3champions ladder, it certainly deserves it! I think it would also work for 3v3 for sure, and maybe even 2v2 (preferably with enforced cross spawns).
Btw did you also include the double mud golem spot to as a "hidden" reference to Neo and Remo?

Icons 13 Skins 2 Maps 19 Tutorials 1
It's possible that destructables can screw up pathing in a few cases, but it probably won't affect gameplay.
Like when you click move on the minimap and expect your unit to walk there without hitches, but your enemy destroyed a block of rock.
Your unit is now aggroed by 2 slow golems.

But who knows, maybe it's cool strategy to kill enemy scouts if people aren't mindful of their unit?

Maps 11
The point of the destructibles was exactly that you can leave a meaningless trap, not that it would matter in FFA much, that's why it's used only in those 2 types of camps. The rocks can be destroyed in very few hits and I've seen players use them for creepjacks even.
The 2 mud golems were placed there mainly for the slow but I remembered the reference while adding them there, so yeah, it can be consider a hidden reference.
Idk, it could work for 2v2/3v3 but setting enemy spawn priority would probably destroy the random spawn factor for ffa.

I still have some stuff written down that I could change/improve but noone has complained much about the state of the map. Here's the list of what could be in future updates:
- borders, no more infinite trees (not that I or the players mind but I heard similar complains on Logging Camp)
- mid expo turned to red camp (in 6-way there are no red camps, but it still works fine)
- changing merc camp from cityscape to the new village with mostly kobolds (it might not be as "balanced" as cityscape but all the bash and taskmaster's aura might make the creep spots more attractive to creep since they're mostly left untouched in matches now)

The map will also be played in Ugri's FFA Challenge on 12th June as a 6-way ffa. I'm interested to see how it'll go down.
You must log in or register to reply here.