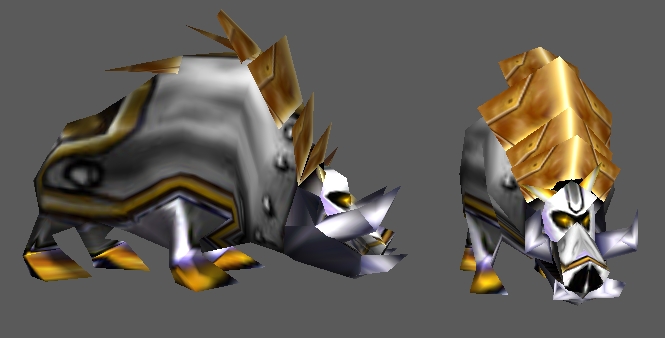 This bundle is marked as approved. It works and satisfies the submission rules.
View usage Statistics Legacy download
Reactions: gusanomental, deepstrasz, ILH and 2 others
A golden and silvery robotic pig to complement Mechanized SteamPig.

Still in need of improvements but in a usable state with an exploding death animation, a simple but working embedded portrait.

A special Spell animation was added to vanquish the forces of darkness with a bang.

Base SpiritPig and textures come from the vanilla warcraft 3. Reskin, model modifications, added animations by Cuore. Please give credits if you use this.

I give you permission to modify this model but at the condition that you credit its authors.


Special "thank you" goes to: Alethos, General Frank and Kirbi0 for motivating me through, and to Abovegame for thinking this concept in his request.

Update #may 19: death animation fixed
Update #may 20: reverting to old zap eyes, put some zap into the death animation, made the eyes blink during portrait animations. Attaching to the comments below the outdated star-eyed variation as well as a goggle-wearing variation, in light of the fact that the changes are minimal and the file size is.. substantial.
Update #february 18, following year: small fixes applied, TC added.
Contents

Models 17
This is a help request to any expert modeler unlike myself. I want help to modify the spell animation (or adding a channel animation) to make what every robot shouldn't miss: a BEAM animation!!!

Also another open issue is that during Death i can't make the geosets disappear exactly when the explosion takes place and this is s... subobptimal. I could really use a hand with that.

Please send me a tell <3
Cuore

Models 2 Maps 1 Spells 1
Like I said, great stuff. Particularly love the laser-cannon in the mouth, lol.

Models 189 Icons 124 Packs 7 Tutorials 2
It just need goggle eyes and it would be perfect.

Models 23 Icons 26
The footman helmet on the back is ingenious.

Skipper said:
The footman helmet on the back is ingenious.
Click to expand...

Truth is that it's all the footman armor except the dorsal golden plates.

Models 17
Death Animation fixed.
I had indeed set the correct frames to alpha out the pig geosets at the right time during the explosion. But there was no instruction that specifically told them to alpha :1 at the beginning of the Death animation (the whole pig was alpha opaque implicitly from the first frame).
Just explcitly setting alpha :1 at the beginning of the Death sequence was enough to solve the issue.

Models 17
Here I attach the other available variations for those interested:

Models 9 Maps 1
I love love love that (spell) beam animation! Also good job at making a fully functioning portrait. I like the new eyes even more- and the alternate versions look good too. Also, I may be messaging you eventually to learn how to do some animations things...

Icons 4 Tools 1 Maps 2
I've imported the model but it seems it has a problem with the dying animation as it runs forever.

Abovegame said:
I've imported the model but it seems it has a problem with the dying animation as it runs forever.
Click to expand...

The day that I feared has finally come! This calls for an emergency PM.

Maps 1
I can vouch for how great this model is!
You must log in or register to reply here.