As some of you know, we occasionally cast a spotlight on some our community's activities, this includes but is not limited to creative map projects forged by members of the Hive Workshop. And today is no exception. A few days ago in the Map Development board, an old project resurfaced. You can read the announcement in full detail here or read on below.


What to expect from it, now that it's back to the world of the living? 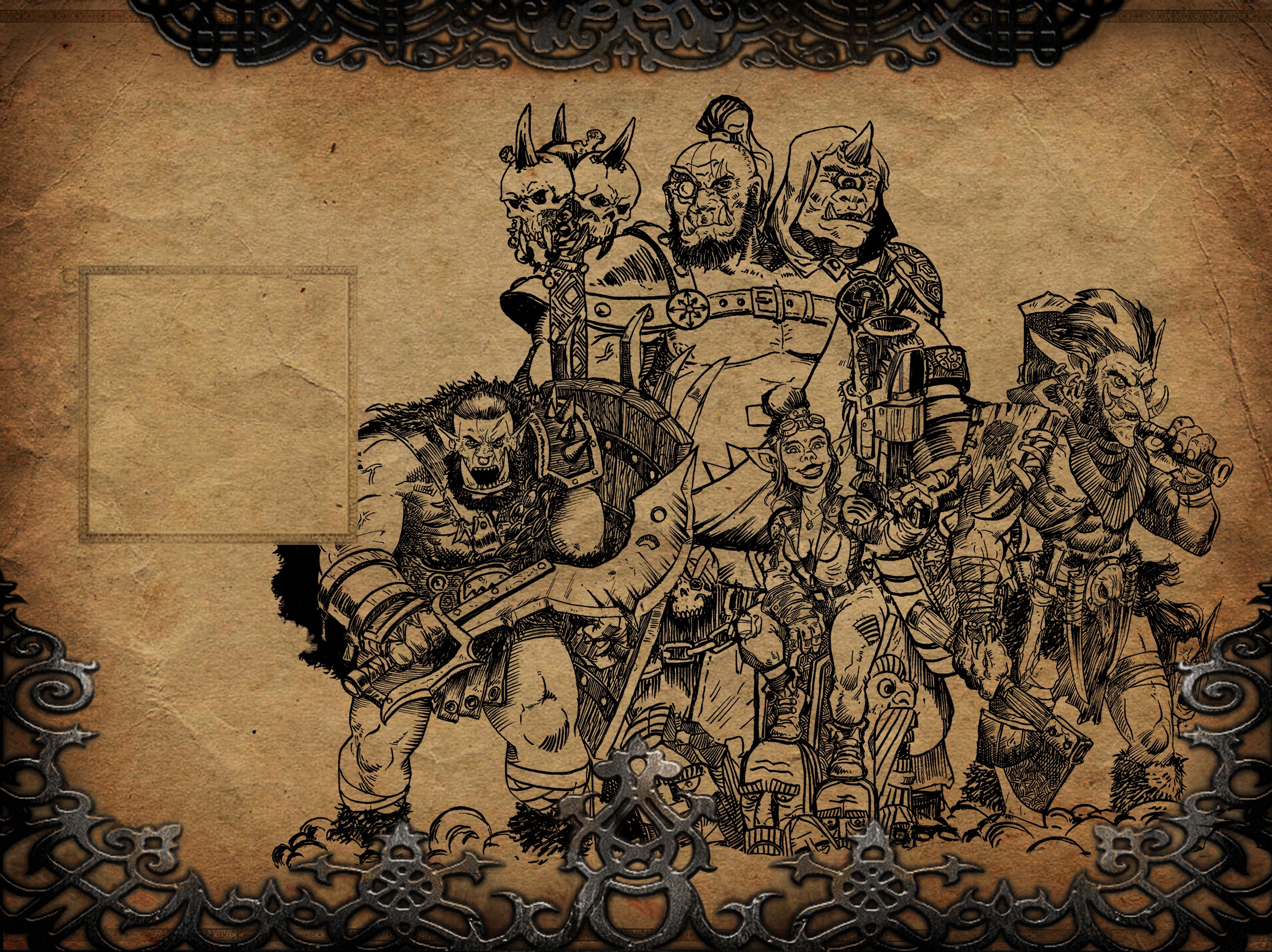 Which factions will be playable?

In the prologue, three of them: Draenei, Orcs and Ogres. In campaigns, Orcs will be available not only as the basic faction, but also as three additional clan-specific variants: Blackrock Clan, Twilight's Hammer Clan and Feral Clans (Thunderlords, Frostwolves and Whiteclaws using the same unit roster, all clad in furs and riding wolves). Some additional clan-specific units, such as Warsong and Shattered Hand ones, will also be included. And that's not to mention new creeps!

Next chapters will each include more playable factions: 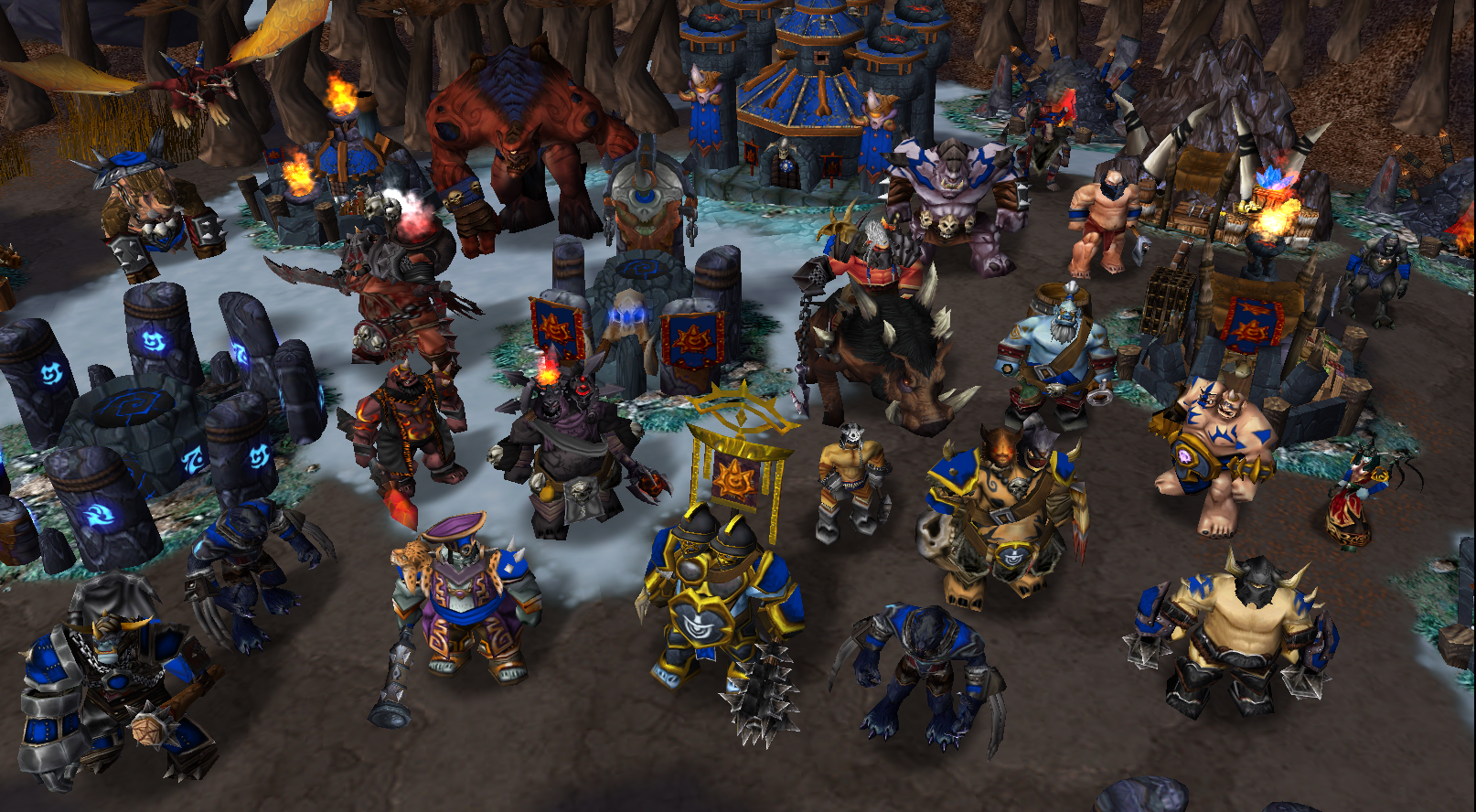 Why release in packs / chapters?

The moment we knew the scale of the project, we were facing the same choice StarCraft II had:
We chose option two. This way, we still have ample space for fixes and improvements, can include all we want, and produce the content packs in meaningful doses. It also gives more stuff to look forward to, but does not diminish the ambition to make HoS the single most epic WC3 classic mod, as it was always meant to be. 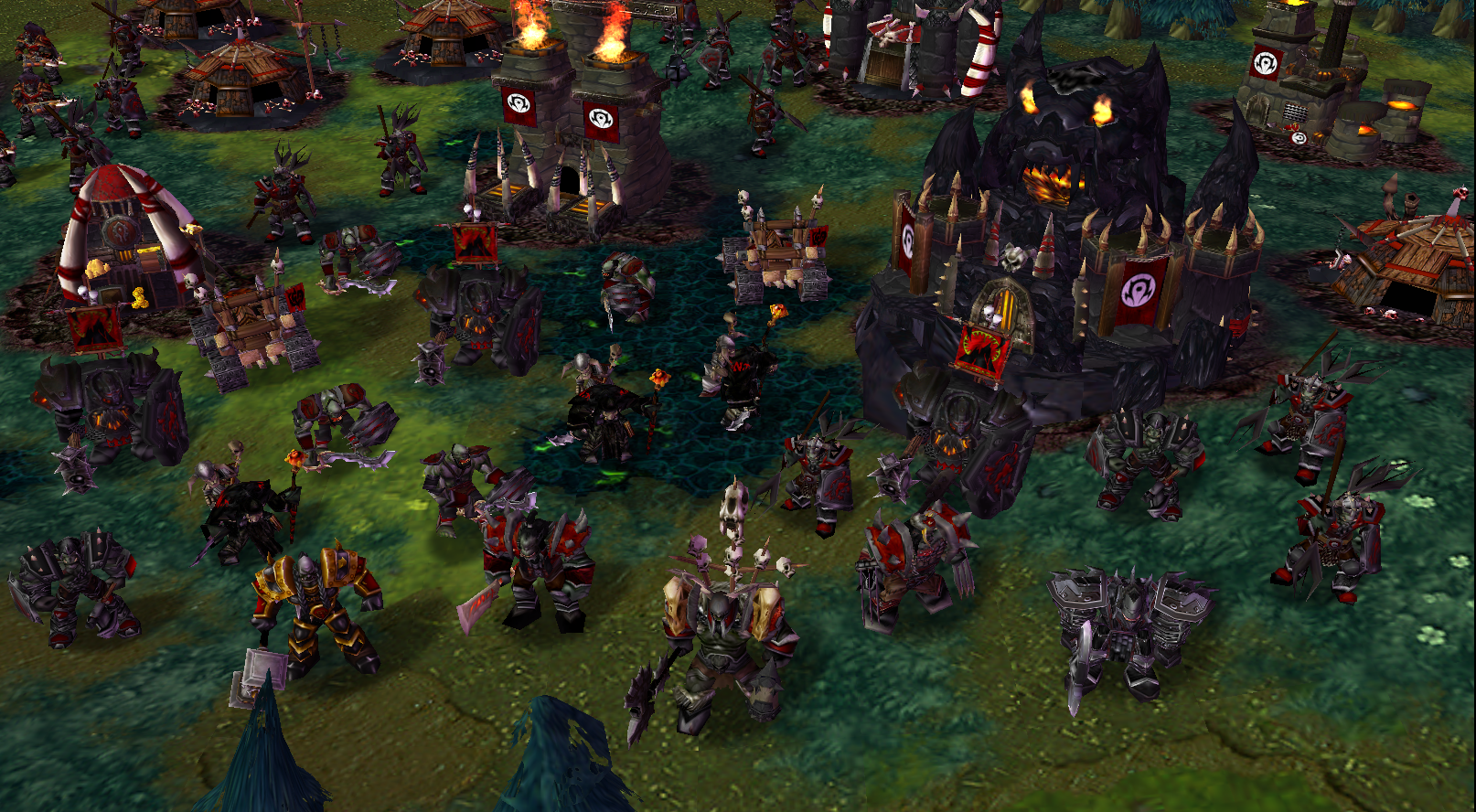 What level of visual detail is expected?

Back in 2003, one of main ideas as HoS just started was improving Warcraft 3 visuals and taking graphics to a new level of detail. As of today, when Reforged and WoW-based mods are around, this is no longer a goal, but we're aiming at decently detailed models (with polycount somewhere at vanilla WoW level) all sharing a consistent and unique visual style.

Some models and their parts will surely have higher detail level than most: heroes and capital ships / buildings are definitely more detailed, and faces of characters are expected to have higher resolution textures and higher polycount than bodies.

We're also making graphics somewhat closer to WoW and Warcraft 1 and 2 in terms of proportions, gamma, and overall style and feel, using ported assets where they fit too.


What exactly will be different between races within the same side (i.e. different Horde races)?

Pretty much everything. While we can't really change the hardcoded mechanics (like powerbuild being available to Alliance factions), everything else will differ.

This principle applies to every even remotely similar unit, with some not even having equivalents. While certain units may be similar or even borrowed by different factions, the differences are always there and are not just cosmetic or simply their costs. We aim at trying to make lore significantly affect the gameplay: that is, an ogre unit should definitely and logically be different from an orc, and stuff that is ogre-ish lore-wise should go to ogres first. Think StarCraft-level differences, with much inspiration from unit-building of Command and Conquer series, Dawn of War, Disciples and Heroes of Might and Magic.

Most of WC1-WC2 units will reappear, but they will be different in terms of gameplay. It's not a literal remake, after all. Most iconic traits of these units have to be kept, however, like Bloodlust of Ogre Magi, Death and Decay of Death Knights, Water Elementals summoned by Conjurers (and, true to Warcraft 1, these elementals will look like graceful women rather than shapeless blobs), Daemons summoned by Warlocks, Exorcism of Paladins, and many others. Many significant differences will be there, though: for example, Knight/Paladin and Ogre/Ogre Mage will be separate units with different abilities and roles, not upgrades. 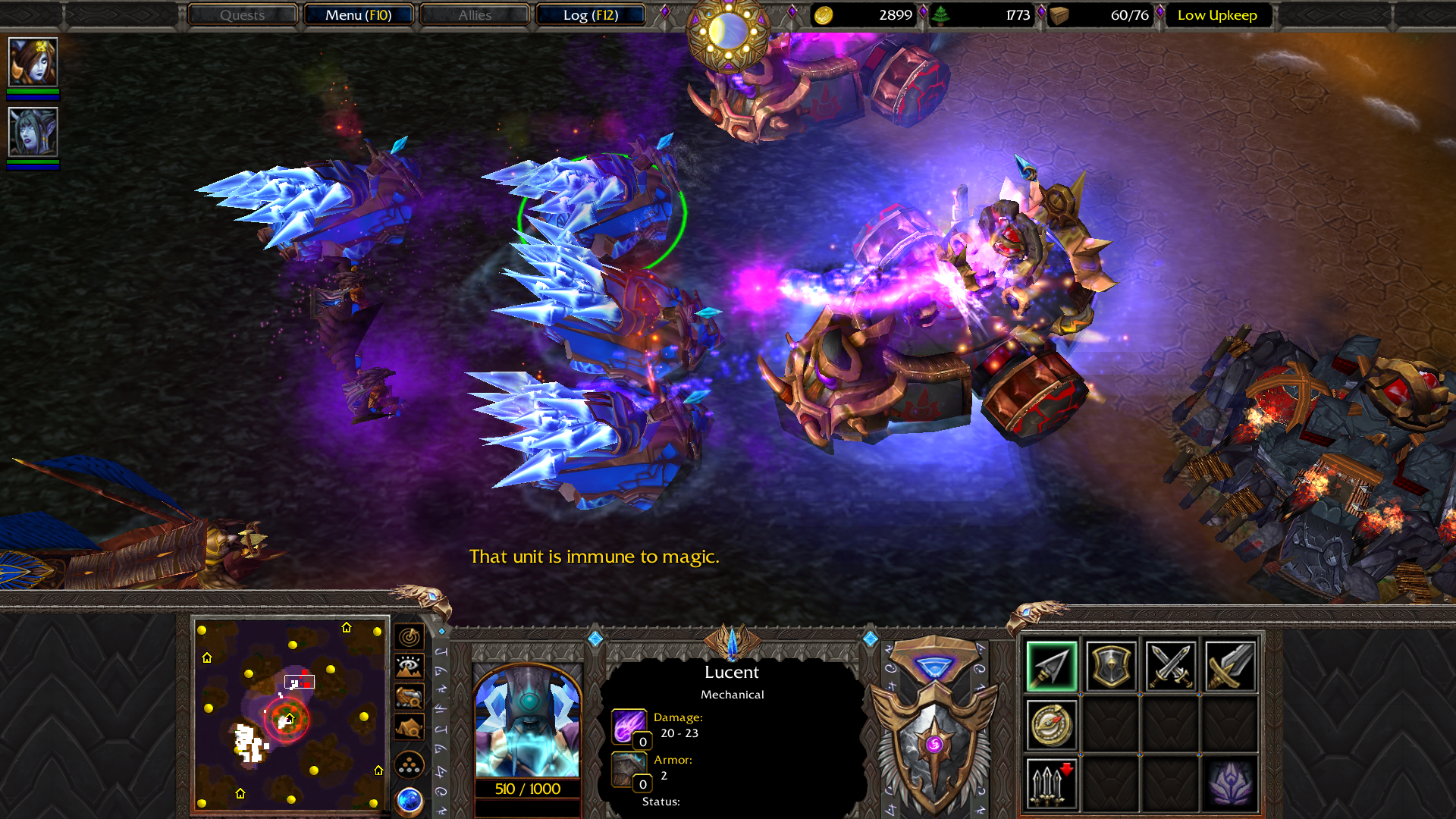 Yes, each faction will get their own 3 ships (transport, frigate and battleship) with their own abilities, strengths and weaknesses. Ships are very powerful at sea, although only battleships can fire far enough to really harm units on dry land.

This is still a great simplification from WC2, though. There won't be an Oil resource (in some campaign missions there will be actual oil rigs, refineries and tankers, but they'll be harvesting gold instead), and not all maps will even have enough water. It's more of a fun addition than a core mechanic.

Because WC3 was not coded with this in mind really, the shipyard will be moved to the faction's shop, and any Hero can buy it as an item and build it on a shallow or deep water as long as they have prerequisite buildings. AI will not use ships at all unless scripted in campaign maps. 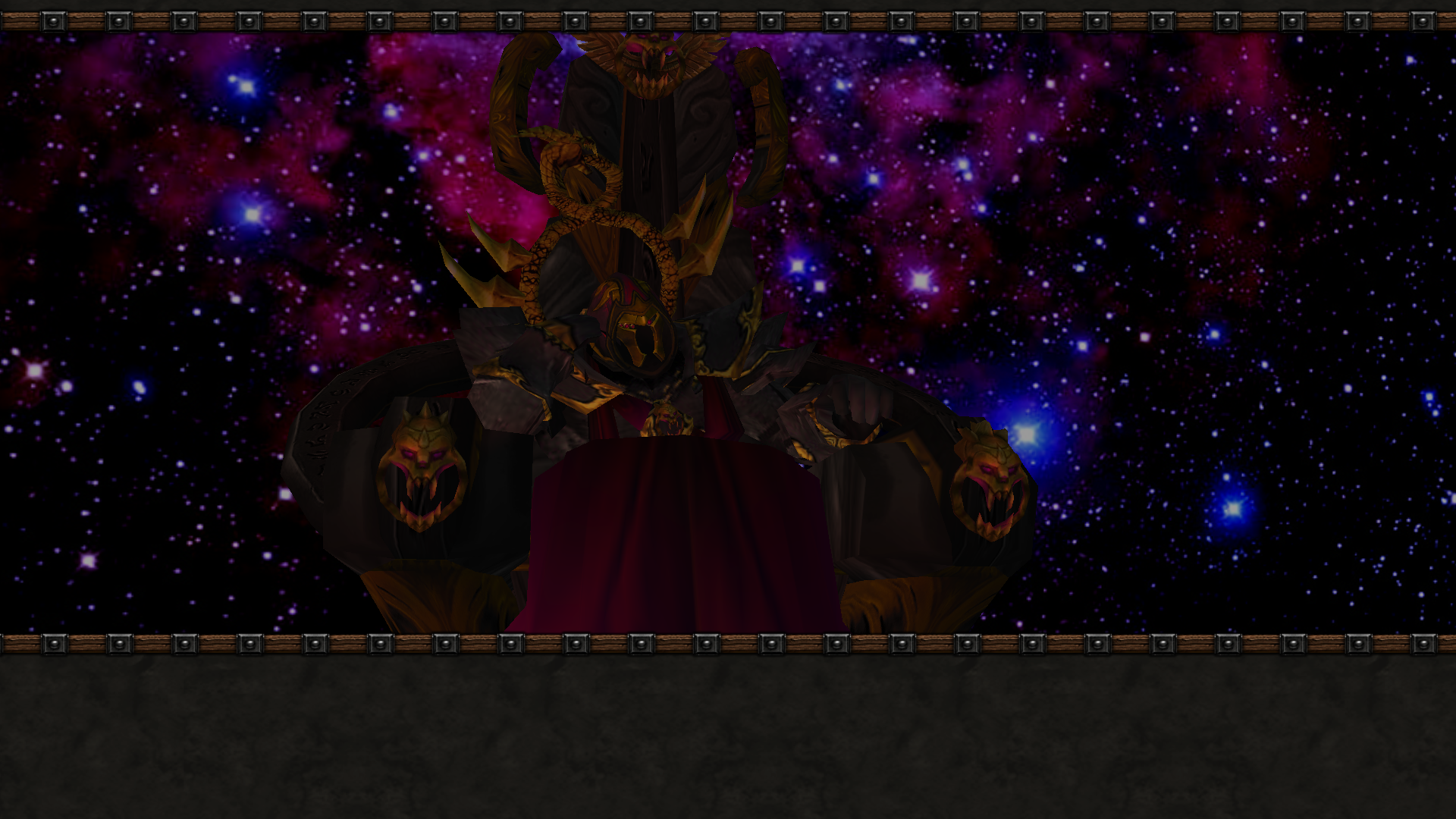 What are new mechanics to look out for?

Undead classification is not of much use anymore - since undead units are only a handful of creeps now, and literally two Orc units. Instead, two new ones are introduced: Bulky and Mounted units (these are one and the same, just different names; used for large creatures and, well, mounted units) and Shadow (for simplicity, all units tied to Void, darkness, undeath and Fel, are classified as Shadow).

Levels are now much more condensed: while Heroes remain at levels 1-10, units are now on same level as their tier (1-2-3, rarely 4), creeps scaled accordingly (level 1 roughly equivalents to tier 1 units, 2 to 2, 3 to 3, 4 and 5 being more powerful than player units, and 6+ are basically mini-bosses). This also means heroes are harder to level up, but their abilities are scaled up to compensate.


Armor and weapon mechanics are now closer to vanilla WC3, with more intuitive relation. We also try to factor the unit's logic into these things; i.e. thrown axes will count as Normal, and spears as Piercing, giving some units unorthodox roles like melee caster-killers, aerial artillery or backline anti-shooters.

In the campaign, an Achievements mechanic is added, earning credit for going out of your way to certain tasks and even unlocking new plot branches for non-linearity, choices saved between missions.
Will there be melee maps? 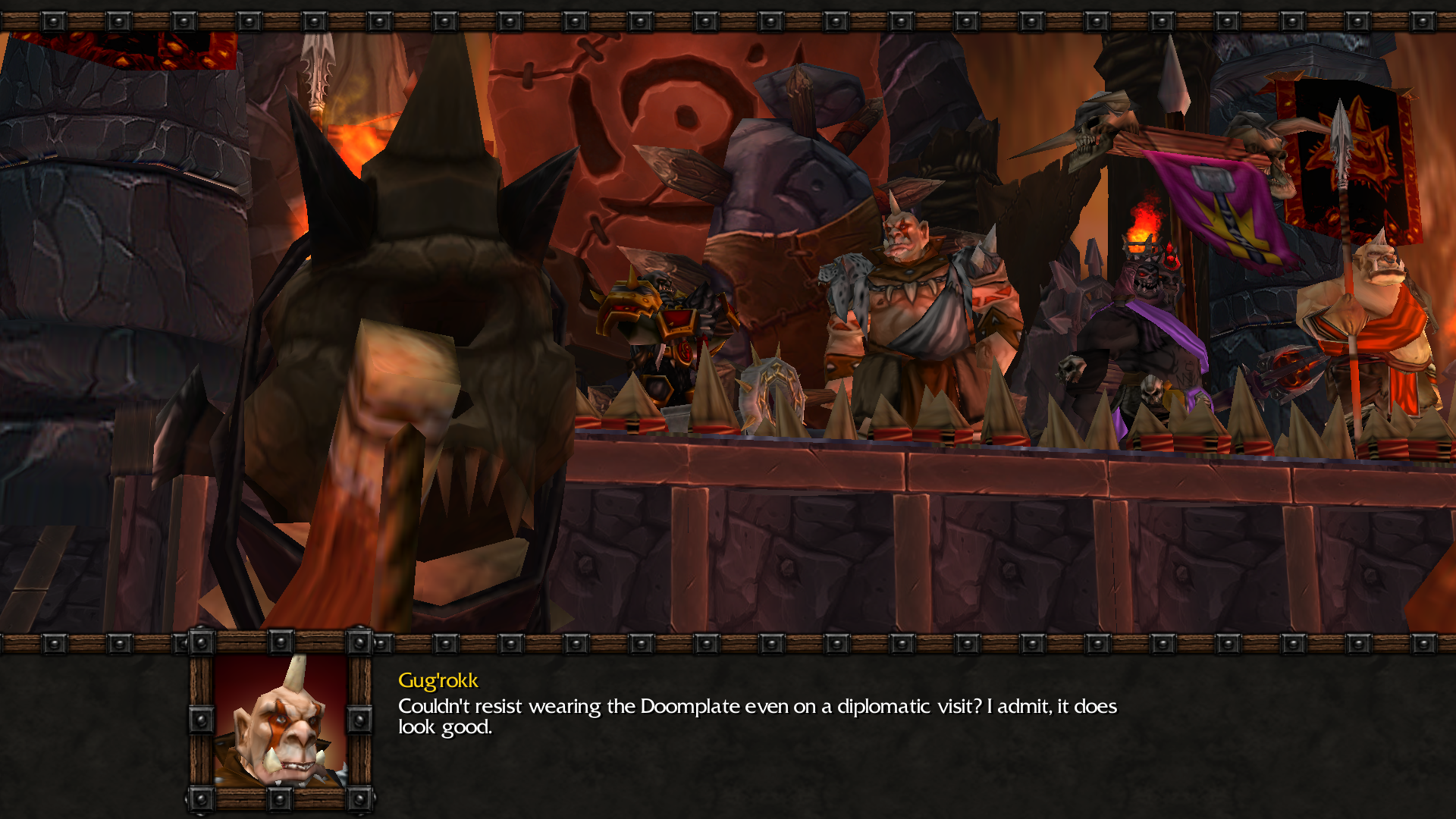 As much as the game engine allows it. We will make a few maps for Reforged (with classic graphics) that can be played in non-story mode, just for fun, against your friends or against an AI.

These are also a good way to familiarize yourself with the new mechanics, units and tech trees. The melee maps will work by allowing you to choose a faction before battle (once you choose the Alliance or Horde). In the prologue, this will only work for the Horde (Orcs or Ogres).

Note that in earlier releases, Undead and Night Elf players will not get to choose to play; if you choose them, the map will count it as a defeat.


Will there be a voiceover?

All units' and heroes' ingame replies will be new (with very few exceptions such as Peon or Footman, but even the Grunt got a new voice). We originally recorded lines for the main characters and some units back in 2000's, but as many more were added since then, we borrow their voices from other games. For example, Orgrim's replies were carefully cut from his obscure dialogue in Warlords of Draenor.

Cutscenes and campaign dialogue, however, will not be voiced; we lack a big cast of professional actors to do that, as the script is huge, with dozens of chars.

Note that due to limits imposed by the engine, to use the custom voiceover, you will need to download a separate MPQ archive that contains the necessary files, and upload it to your Warcraft III folder. 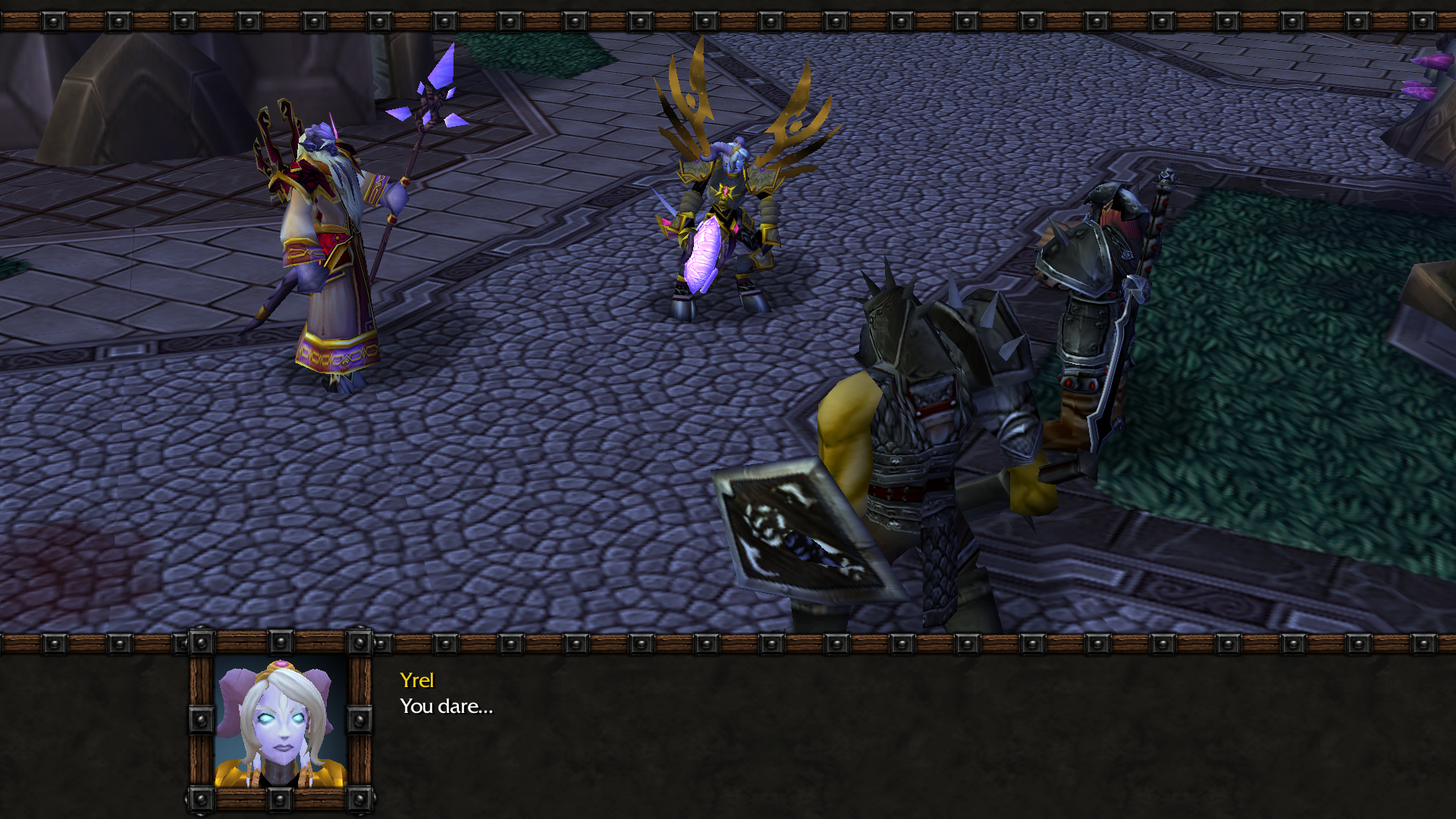 Is the plotline set in Main Universe or Alternate Universe?

It’s intended as main universe, but the events of WC1-WC3 are not shown directly, focus is on what was left out. From the canon standpoint, we take Chronicles as the reference, but follow the principle of “If it’s not stated as non-canon, then it may or may not be one”.

We also try to make the campaign slightly non-linear, changing subsequent missions based on decisions made in previous chapters, with choices being meaningful to both the story and the endings. It’s all still within the MU canon, but we want the story to feel “living” within the universe, not just mimicking it.

For the tone of the story, we wish to focus more on the darker side of Warcraft universe. It is not meant to be funny or lighthearted. 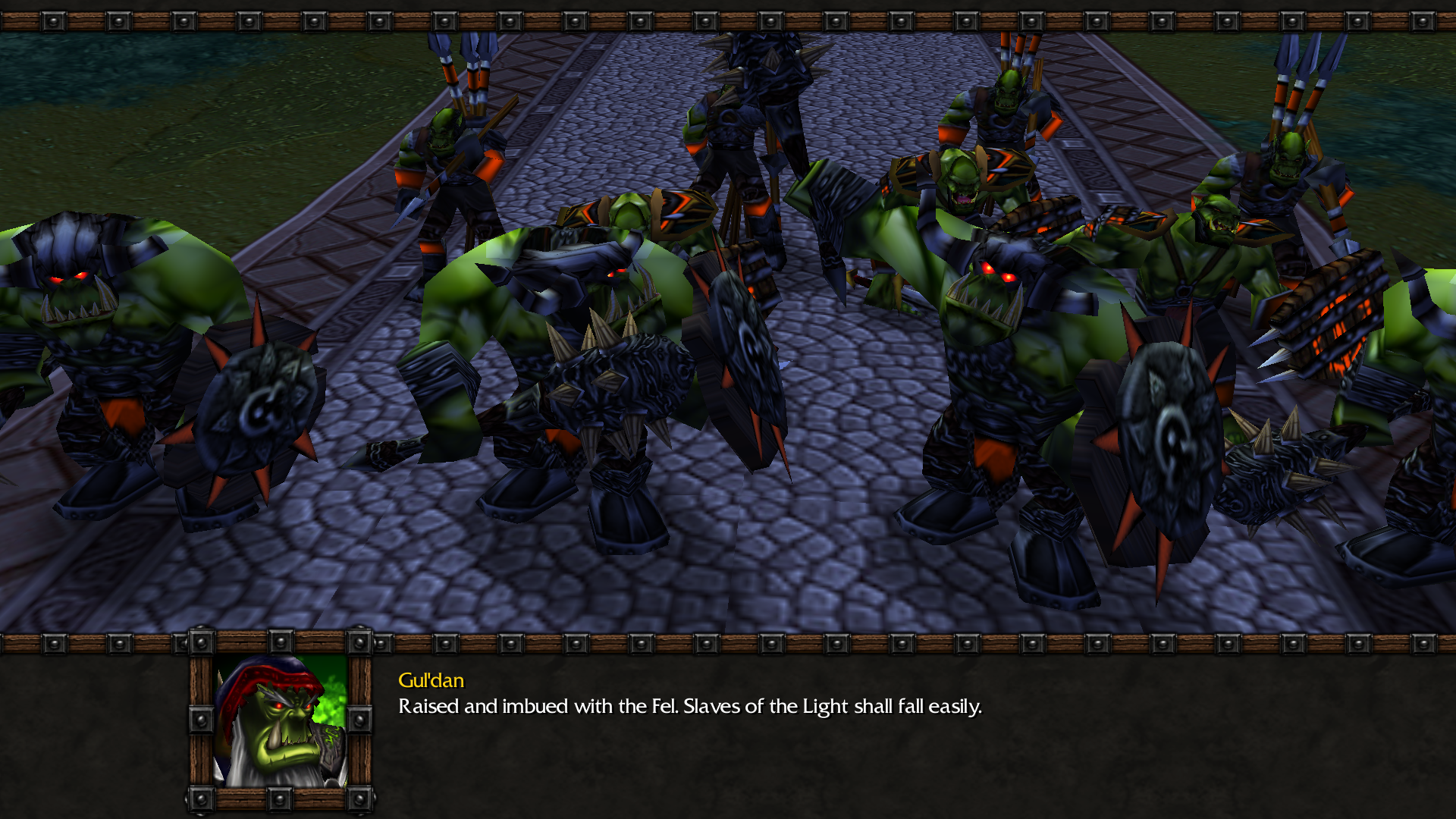 Which game version will the project use?

We currently use 1.26d, which can be acquired easily here, and we can be sure it works as intended there. It did lock us out of a few mechanics, but that was not critical.

Version 1.29 is partially supported, with some minor bugs, and will be fully supported in future.

Cannot guarantee that it will work on any higher version of classic WC3, and it will definitely NOT work on anything below 1.26.

Should it become technically possible to shift the campaign to a more stable version of the game without a loss in quality, we will gladly do so. 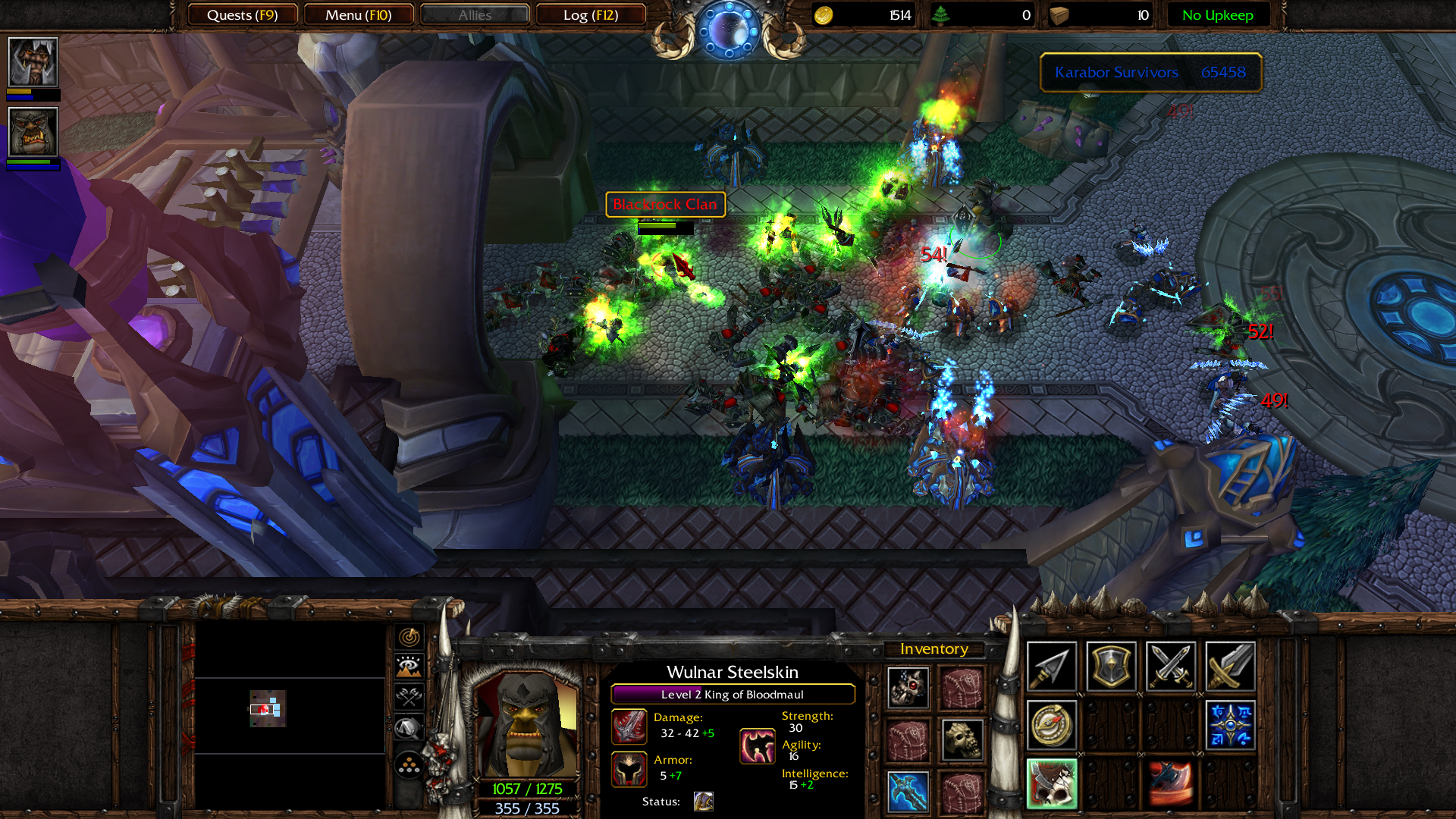 Will you move to Reforged (with classic graphic settings)?

Melee maps will be done to work in Reforged, with classic graphics.
The campaign is more nuanced:

Porting is not possible in the game's current state. While this may give us some additional possibilities, the risks are currently not worth it. Time will tell.

Can promise that we will prioritize the stability and performance, thus we will try to adapt the mod for Reforged if it proves to work better there.


A most likely event to kickstart the Reforged migration would be the campaign support enabled in game. Should that happen in foreseeable future, we will develop the Chapter 1 of the campaign, and the future releases, for the Reforged from the start, but Prologue Chapter was done for 1.26/1.29 with no easy way (currently, at least) to simply adapt it.


How quickly is development going? / How long until release? / When open beta?

Now that it’s more or less mass-produced and everything, pretty quickly. On average, each model takes a day, for example. Missions, of course, require much more time: it usually took us a week or so to write the script for each, and a month to complete it, excluding pauses taken. But we can and we should accelerate it all.

Do you need help?

Yes, and always. Will be thankful for any of it, every little bit helps - both professional commissions and enthusiastic aid.
See the full announcement to see how you can do your part!


Please join us on our Discord channel

Dusk of Draenor is only the beginning. There's much, much more to come...
~ @Rommel 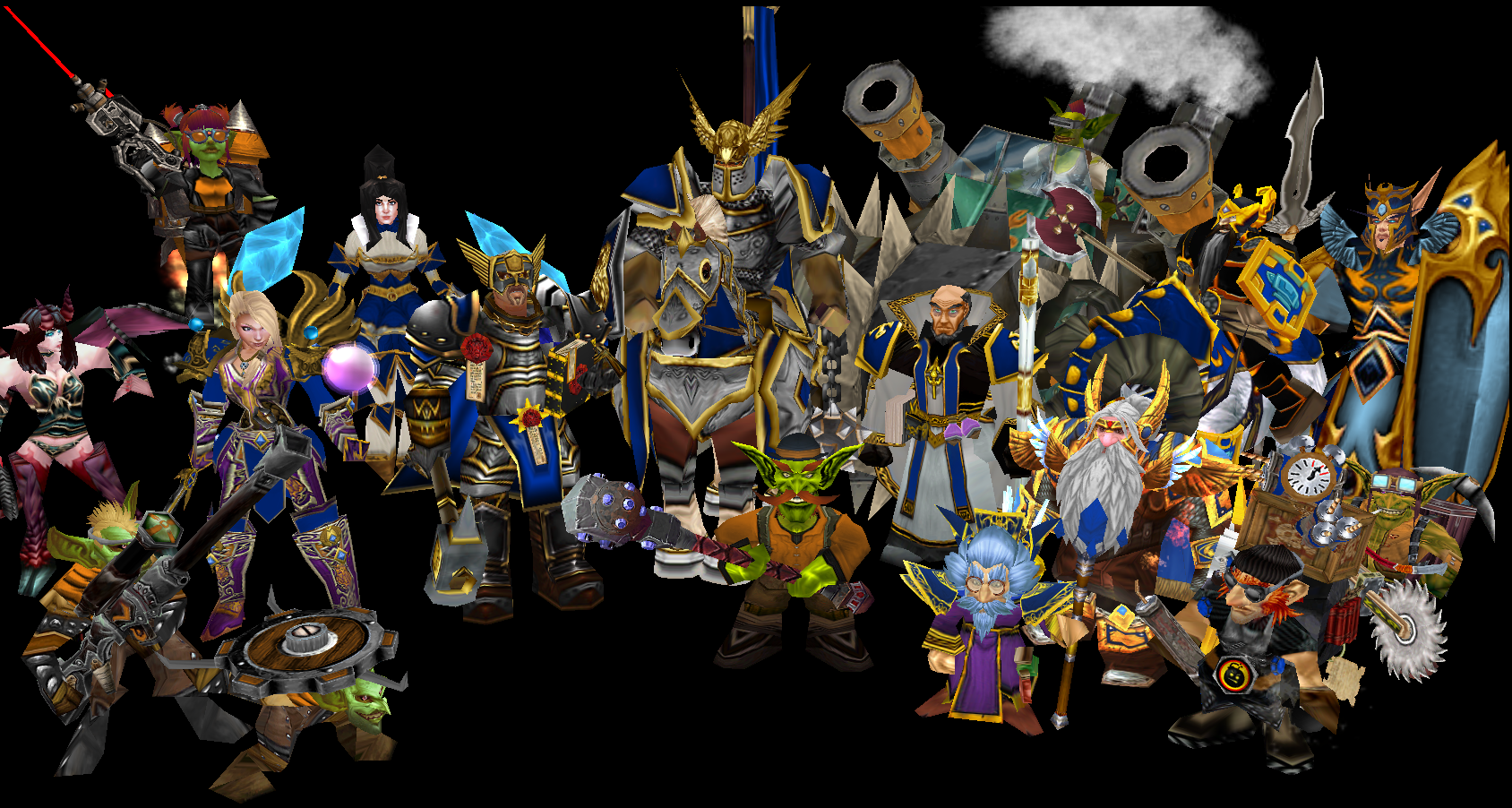 Models 22
Draenor, The Burning Crusade, Orcish origin and some good old "Violence is the best defense and offense". Can't wait to see what this has to offer!

I want a easter egg mission where Gul'Dan fails to invade Morrowind.

anything else, keep going.

Where can I download this, at least at the stage of the beta version that is?And I would also like to get a model of the resources of this beautiful circle of Draenei from world of warcraft. You can upload it here, thanks Mellstorm said:
Where can I download this, at least at the stage of the beta version that is?
Click to expand...

Beta's on its way, hopefully within a month or two.
And the arch is taken from this pack:

Maps 3
The cinematic screenshots look amazing. Everything looks smooth and detailed like WoW.

Maps 4
It's the mod with lots of really great drow and wood/high elves models isn't it ? I remember this from way back, glad to see it being resurrected. But from what I remember it looks like it's now a different beast - and even more ambitious ! Anyway, good luck to the team

StarCraft: Legacy of the Void Closed Beta a must see!

The maps system is changing