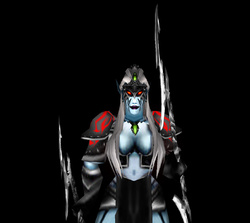 So here is another model I made some time ago as a bonus for HoS resource pack. I forgott to include the princess in the pack, so sorry abotu that and here it is, separated.

Her backstory was that she is renegade princess hunting demons in th vast undeground systems under Kalimdor, after the sundering.

Skin was made by Rommel and GhostTruster, credits goes to them. Original model was made by Tarrasque, permission to to edit this model as a part of HoS resources were made by both Rommel and Tarrasque.
Previews