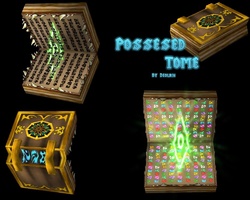 A model I made for the 22nd modeling contest. It's a mimic - a book that 'wakes up' when someone tries to read or grab it, showing a nice set of razor-sharp teeth, as well as being capable of magic using the inscribed runes within it. Can morph between stationary(book) form and flying(combat) form. Use a morphing ability(e.g Druid of the Claw's "Bear Form") to switch between them.

Best used as bait for adventurers inside dungeons.