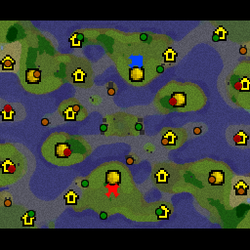 This long island is navigable by sea thanks to the Goblin transport ships, but this series of small islands also can be crossed by foot. Either way, danger will be encountered everywhere and the greatest spoils be found off-shore.

Here is how I would describe this map in 1 sentence:
Perilous Shores is a large map that is about decision making about center land control or extensive ships usage for creeping and surprise attacks.

Here are the main aspects of this map:
• Sunken Ruins tileset
• Linear 1 path ground access to the enemy map and more creep camps.
• Access to a close unprotected Shipyard to buy Transport Ships, and lot of sea terrain to navigate on.
• Wall-off possible to completely block/defend from the land path (while still having boats to navigate to the main land at another place)
• Creep routes that are water-based or ground-based
• main land item shops are Goblin shops close to the player bases.
• main land units shops are 2 taverns close to the player bases, and 2 Mercenary Camps closer to the middle lightly guarded.
• In each land corners are a Goblin Laboratory guarded by a hard orange camp (the Sea Giant Hunter guarding it has Ensnare if the player tries to buy a Zeppelin or approach by air)
• 1 natural mine, and 1 difficult middle expansion
• Side Mercenary Camps for backdoor pushing or easy mercenary units access.
• Markets and Mana Fountains guarded by red camps on the side of the map. Mana fountains, instead of Life fountians, so air units can't go regen easily, safe from grounded units, while still having something good with a Transport Ship.

Important side note about Transport Ships: To enter a bunch of units in a ship, you need to not have the ship selected with the unit group entering, otherwise the ship will stop loading units after 1 has entered.

how and why I did a map like that:


I wanted to do a naval map, with a pretty simple layout with a ground access to the enemy base, but having boats as a good alternative as a creep route and mobility around the map. I inspired my terrain creation a lot from Brood War maps and a bit from Warcraft 2 and the game Sacrifice (an RTS game from the year 2000). My map design is that I want to push new ideas that is more than a terrain layout, so making a Naval map is the best for me as a 1st Ladder map project.

Looking at what I've done, when we observe beyond the terrain layout, my creation is a bit crazy with a lot to think about, but I wanted most to bring some ideas to Naval map creators and push further the idea from Blizzard that boat maps are greeted upon (with the rebalancement of the Transport Ship in version 1.32.6). Two of the important points, I personnally think, are limiting drop zones for the ships, and using the new Mercenary Camps to their full potential.

Most of the islands have "ledges" that prevent boats from dropping units from any coasts. I limited most of the dropping options on certain parts, so it gives only a few specific areas to protect, and helps to reduce the siege units rushing from a ship drop. Also, while there are ledges all around the islands, the important detail is that none of the beach pathways act as a ramp, so all the terrains (other than the Goblin labs' cliffs) are on the same floor. I wanted that so there is one less thing to worry about from the players (no need to worry about cliffs being used as defence or offence), because there is so much to think about already.

I really wanted to add a Goblin Laboratory to have Zeppelin and the other 2 goblin units accessible, but without "stealing" the value of the Shipyard, so I made them difficult to access, being very far and defeating a difficult orange camp (that still reward a level 4 Permanent item).

One of the cool things I discovered when I was testing the Mercenary units in the Sunken Ruins Merc Camp: 2 of the 4 units are amphibious (Mur'gul Blood-Gill, Mur'gul Snarecaster), so I placed a pair of Merc Camps fairly accessible, toward the center, guarded by a (harder) green camp, so these can be recruited to hunt potential enemy transport ships that are wandering around. The 2nd pair of Merc camps are in the corners, so the players can buy them early for easier creeping or later when doing a backdoor push.

In the past, I used World Editor to do small personal projects (like an alternate Melee) for fun and mostly for myself, but it's the first time that I use it to make a Ladder map. It is a bit more difficult than I thought, but I did enjoy it and might do other maps.
About what improvments I think my map probably needs:

I found it one of the most difficult things to do, not only because making a smooth creep route on a linear ground path has to be good, but also which items are dropped by these creeps. Also, the 2nd expansion (closer to the center of the map) have probably a bit imbalanced red camp to go for it, but it is still intended as a late game expansion with good ground pathing protection.

Also, I really want to add 1 more camp next to the natural expansion, but I'm not sure what to do, maybe I will get an idea later.

With the release of V2, I am pretty happy with the result, so I think this category no longer need improvement.

Seeing the size of the map, a 2nd Goblin shop on each half of the map seems important to me, but I'm not sure where to place them. It's maybe not needed, since the Goblin shops are close to the bases, and can be used by heroes to buy staff of tele and go to their armies.

There is room for a single Goblin Shop in the middle, but it would probably give an advantage to the attack player. I know there is an odd number of Goblin Shop in Echo Isles, but I'm not sure it's the right thing to do here.

Transport Ships are probably a bit too free in their movement path, juking and reaching important beaches to drop units. It is possible that I will add more land terrain in the middle, but I'll keep the beach paths for now.

I'm not really good at that, and might revisit later to make it prettier. I added a bit of doodads, but a lot more can be done. The map has a cartoonish* style to it with the ledges and beaches everywhere, it doesn't aim to be a realistic appearance anyway.
* - I can't find the right word
Changelog

Creeps & neutrals:
• Fixed the north-west's natural expansion having a second Pooldweller instead of a Prawn
• Rotated some creeps
• Moved the top tavern slightly bit down to being symmetrical to the other tavern

terrain:
• Rounded the unbuildable terrain around the taverns
• Increased the size of the left island expansion, made it similar to the right island expansion. Also tweaked the trees a bit
• Improved the bottom-left gulf to be more rounded
• Decreased the eastern land path of the northern tavern to be a bit more symmetrical to the other tavern.
• Improved terrain esthetic a tiny bit more

Creeps & neutrals:
• Between the 2 starting green camps, swapped the level 1 tome and level 1 permanent
• Goblin Merchant camp, Removed the level 1 tome from the Skeletal Orc
• At the center merc camps, replaced the sea giant (level 3) to a Skeletal Orc Grunt (level 5)
• The center Mur'gul camps, reduced the tome level drop from 2 to 1
• At the Market camp, Removed the level 2 charged from the Stormreaver Necrolyte
• At the natural expansion mine:
Replaced 1 Makrura Deepseer (level 5) to a Makrura Snapper (level 5) (having 2 casters to fight with entangling roots isn't fun I think)
Makrura Snapper drops a level 1 tome instead of a level 2 tome (transferred from the removed Deepseer)
Replaced 1 Makrura Pooldweller (level 2) to a Makrura Prawn (level 1)

Terrain:
• Increased the pathing size of the bottom-right, the area between the tavern and the gold mine, to be more symmetrical
• Added and changed some trees next to the top-left natural expansion
• Changed the terrain-type around both taverns to be unbuildable
• Improved terrain esthetic, around the Goblin Labs and the corner Merc camps[/SIZE]
Previews

CaptainDan
Hi! I tried your map and I found it reasonably good. I would however suggest some changes you also though might be needed :) Firstly, I'll write about the creep camps: you should switch the item drops of the 2 creep camps next to base; due to their...
Read full review...

Nudl9
This isn't a playable map by competitive standards. You should look at the maps in the competitive pool for inspiration. I recommend reading Mafe's guide for melee maps. Cliffs: Cliffs should be used with more restraint since they don't work as well...
Read full review...

CaptainDan
It's nice to see the creep camp changes, as well as more doodads! :) I still have a couple tweaks to point out: this one is important: top-left expansion has 2 Makrura Pooldweller, instead of one being a Prawn; you forgot to adjust the late...
Read full review...

mafe
So, I didnt read all of the discussion here, but just looking at the current version: -There seems to be nothing that could be considered a bug. Exccept for the countless gaps between trees. Plant trees exclusively using the size 2 circular tool,...
Read full review...
Reputation Statistics
Show Ignored Content