Ten years after the Undead Scourge ravaged Lordareon and the Horde was broken on the Eastern Kingdoms, few scattered clans remained but barely posed a threat. The Humans of Stormwind have lost Lordareon and the Dwarves of Ironforge, Gnomes of Gnomergan and Night Elves of Darnassus eager to assist them in retaking Lordareon and stopping the devious Horde.

The Humans of Stormwind high mage Tharassin has sensed a growing power at the foot hills of Dun Morogh called "Rift Cliff" has sent a battallion of Dwarves and Humans to investiage, finding Orc and Troll prescene they began to set up a Dwarf keep known as Girdle Keep to watch and plan.

One month later the watchers of Girdle Keep seen Orcs climbing the rock of Rift Cliff and set up an outpost to work, wondering what sinister plans the orcs were planning, Night Elves were dispatched to reveal their plans.

They found out that the warlock-shamans were opening a rift to bring in an evil, unknown of what evil that was, Girdle Keep acted and sent its army against the Orcs to push then out of the land but back into their base, but the humans and dwarves were never able to destroy the base but were able to keep them in line, along with never abling to get onto Rift Cliff.

The Rift finally opened and which their in horror the Humans and Dwarves watched as a massive metallic ship emerged from the rift, as the ship finally emerged from the rift and came out the rift closed but widley to the Orcs dissapointment to their failure, the ship crashed nearby their base into the forest. The Humans sent Night Elves to investigate and found to their amazement... Humans of an elite.

The Prologue of the Upcoming Campaign: Worlds of war
Characters:
Terran Characters:

Michael was drafted into the Dominion army at a young age and proved to be a remarkable leader but not the brains for a higher rank but led many infiltraition battles with ease and was never ready to risk his mens lives on a too dangerous task. But when his men were teleported to Azeroth by a Protoss attack and the intervention of the Shaman-Warlocks they must find a way to survive - or die in the new world they stand in...

Cammandore Marcus Rostan was drafted into the army with Michael but was always one step under him. He was on the same ship that fell into Azeroth but was ambushed by Trolls and taken to the Orc base before Michael woke up. Where hes been held prisoner for a week, he is captured in a cell that blocks magic and bullets from the inside..

Roy Leran was a student of Uther and Turalyon before Uther went to defend Lordareon and Turalyon went with Khadgar to the Dark Portal and he was a strong leader with a good heart, he was nicknamed sometimes Roy Leran the Lightbringer II. But decided to be different from Uther, and he was with the Dwarf and Human battalions sent to Rift Cliff and he currently is the human leader of the Girdle Keep.

Kelrag is a student under Khadgar before he left to Draenor and was with Roy Leran to Girdle Keep, he is the advisor and the Dwarf leader at Girdle Keep, he is the wisest of the Dwarves and he sends the Night Elves to scout Rift Cliff and scout the crash site, he is in the desperate fight against the corrupted Terran army and is killed brutaly at the end after taking many with him.

Age: 34
Sex: Male
Personality: The boss, loyal, never backs down, (like a Spartan)

Chris Trister is a valiant Knight of the Stormwind Elite, he is the scout and interceptor of the Elite Knights which has gradually put him to Captain, he is a fast and strong soldier and leader on the battlefield, he never backs down which gives him courage, and loyalty and how he never retreats nor surrender. He is responsible for cutting off the Corrupted Terran Armada's supply source and helping Michael defeat Marcus and salvage parts for a new ship.

Grollok is the leader of the Armies of the Orcish Horde thats left in the Eastern Kingdoms he is away when the crash of the ship and arrival of the Terrans, he is the last warrior of the horde standing in the Terrans way of leaving and goin back home and is thrown off the cliff by Michael in the final hour.

Morgath is the Warlord of the Orc Horde by only relative, he is pratically the worst and lazziest of the Warlords, Grollok technically runs the Horde while all Morgath does is sit in the Fortress and watch his servants do his work, his fortress is destroyed and burned with his body on a pike by Captain Chris Tistner after taking out the Corrupted Terran's supply line where the Horde then attacks Chris' knight team.

Zlura, is the one that fired the beam on Michael to Azeroth but only by accident as he was firing on the Zerg Hive, but when he arrives Michael wants to get revenge until all of the Alliance heroes sooth him, after fighting his forces for two straight days with no true victor Michael gives up the hunt and Zlura allies with him and proves to be a very good ally, he then helps also get back home. Afterwards then Michael joins Raynor's army and Z'Lura become friends with Michael.

Maps 3
Sorry for double posting
but comments and feed back would be nice.

Maps 3
Thanks, I hope it turns out real good.

Tutorials 5
So Far, So Good

It looks like you have mad a good start OrcmastergroM.

The post is excellent and the idea seems interesting.

What percent complete are the various important elements of Worlds of War? Any progress on the terrain, triggers and techtrees?

As you continue to develop your concepts for this map the rest of us will stay tuned.

Maps 3
Well i have just started working on this campaign hope to continue on it till completed (ive had problems in the past with attention span on campaigns but had a SC campaign published) but I am pretty good on terrain im doin triggers on the first map and its lookin really good. The first map has a story teller and the last one will and it shows how the ship crashed and such.

After my campaign i will be recruiting to see if anyone wants to help me do voices. I have Adobe Audition 2.0 just keepin the oppurtunity opened. When im testing my first map ill get screen shots.

I'm looking forward to this! Seems like it's gonna be very nice campaign. The story seems good. Everything seems good. ^^

Models 63 Icons 23 Packs 1 Tutorials 2
this gotta be nice though... well, waiting to see it finished ^^ i only think you should work on personalities more...

Got screenshots from some parts of level 1. 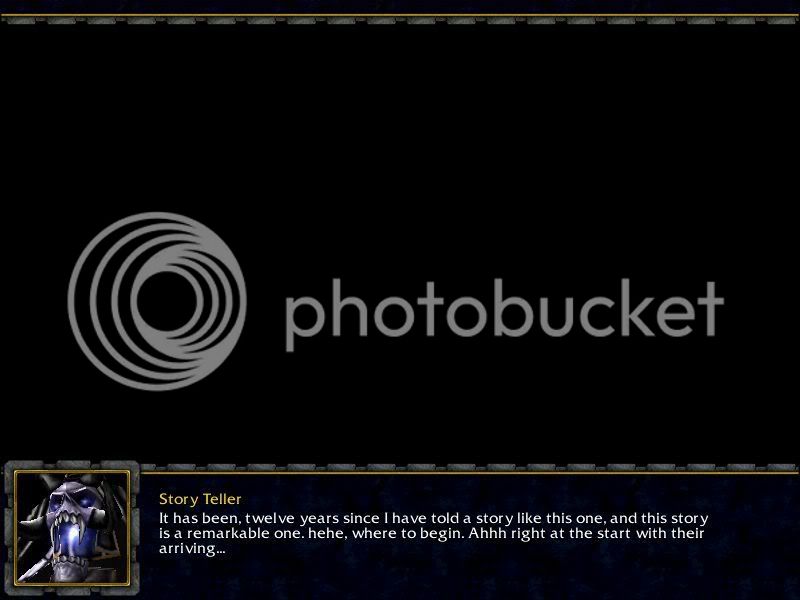 The Story Teller narrates the beginning of the campaign. 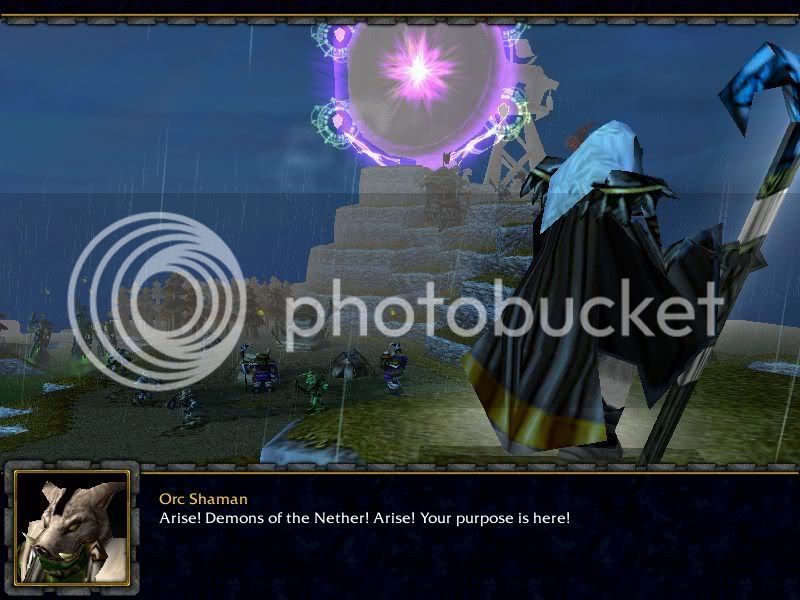 Kelrag watches over the Orc outpost and the Rift 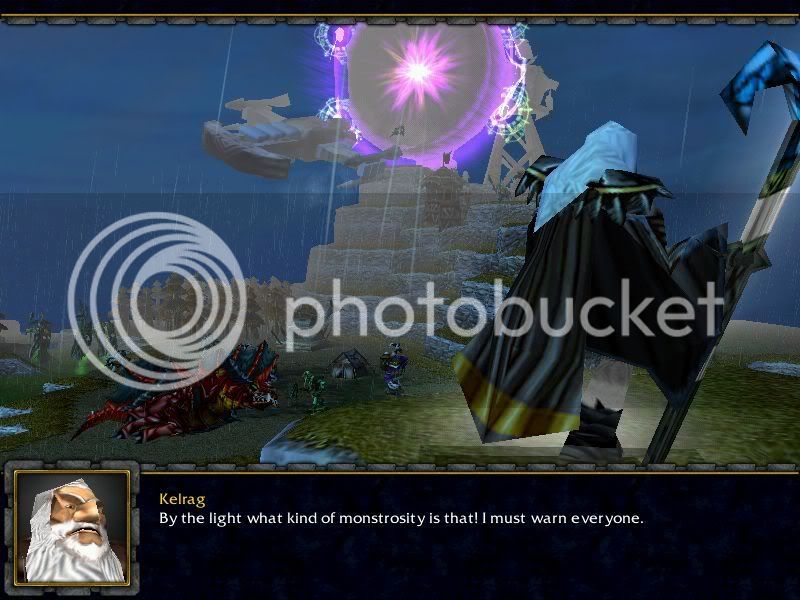 Kelrag sees the Battlecruiser (metallic "thing") come out of the rift 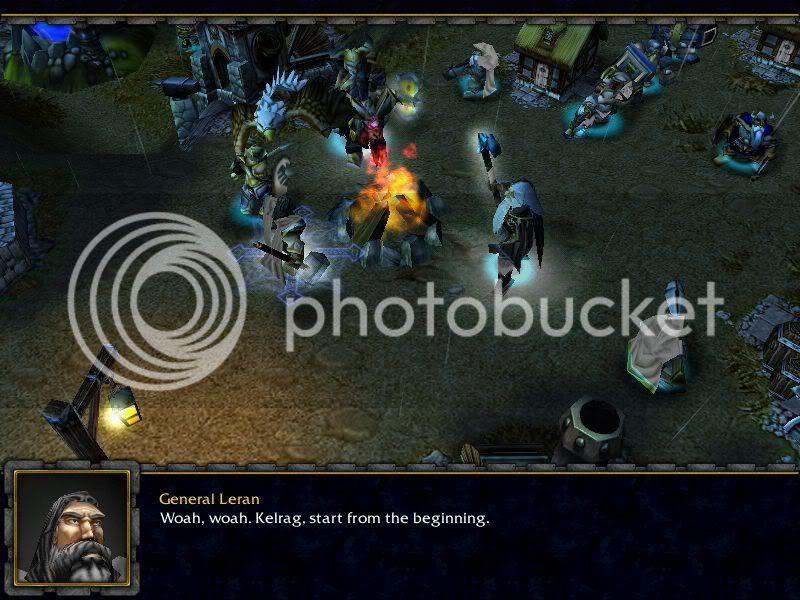 Kelrag speaks over with General Roy Leran from what he saw 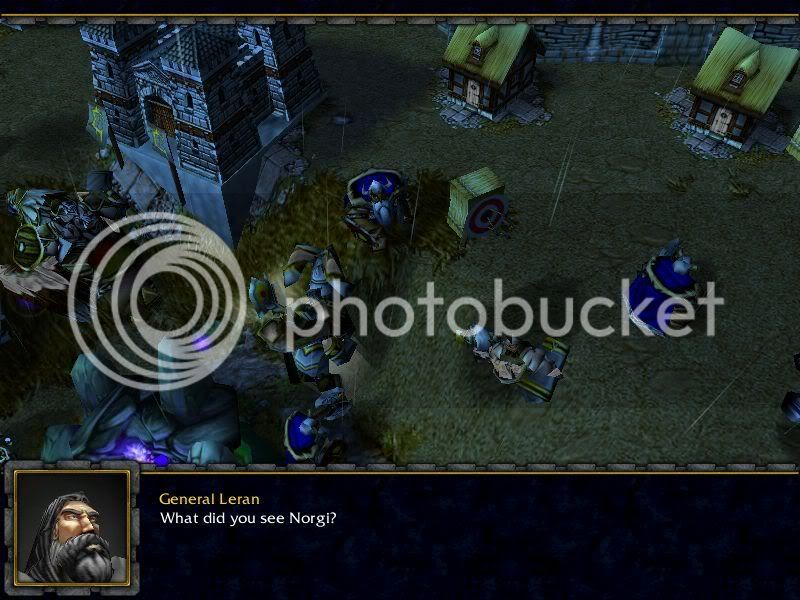 Norgi arrives with the information he has 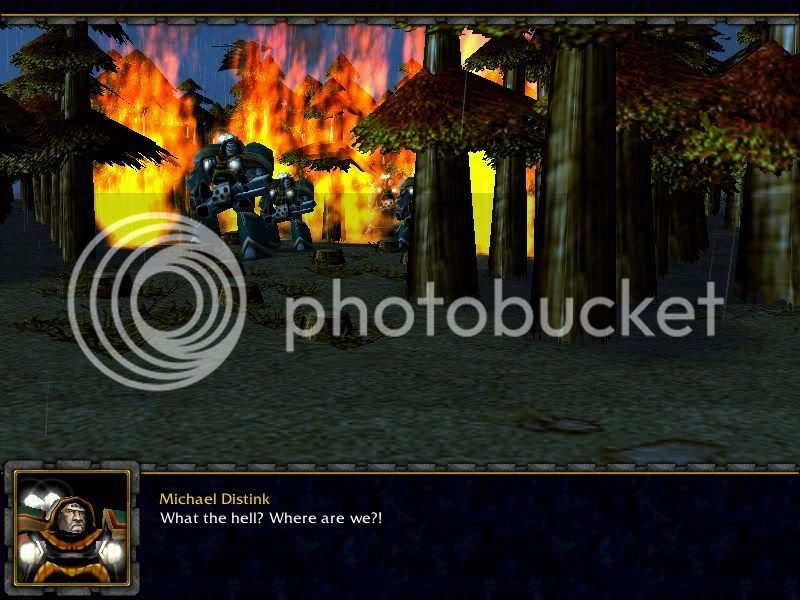 The Marines survived the crash 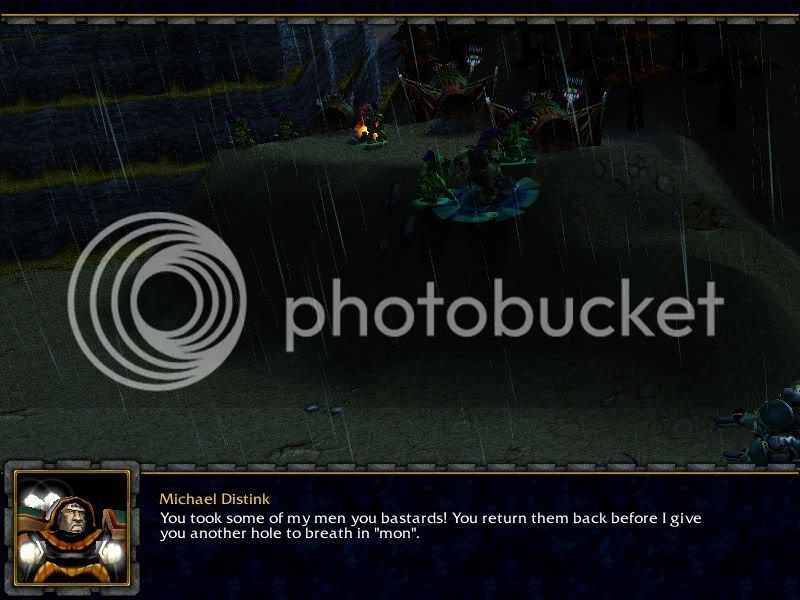 Trolls greet the Marines after the crash 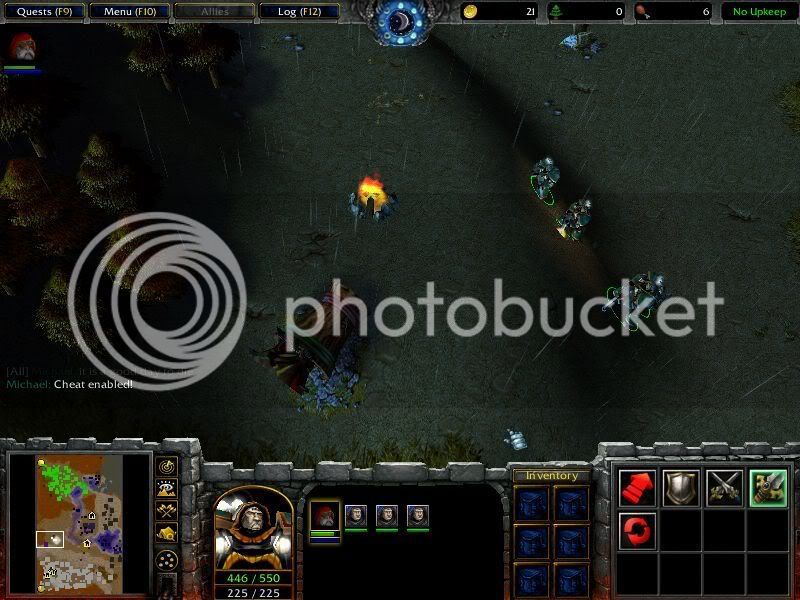 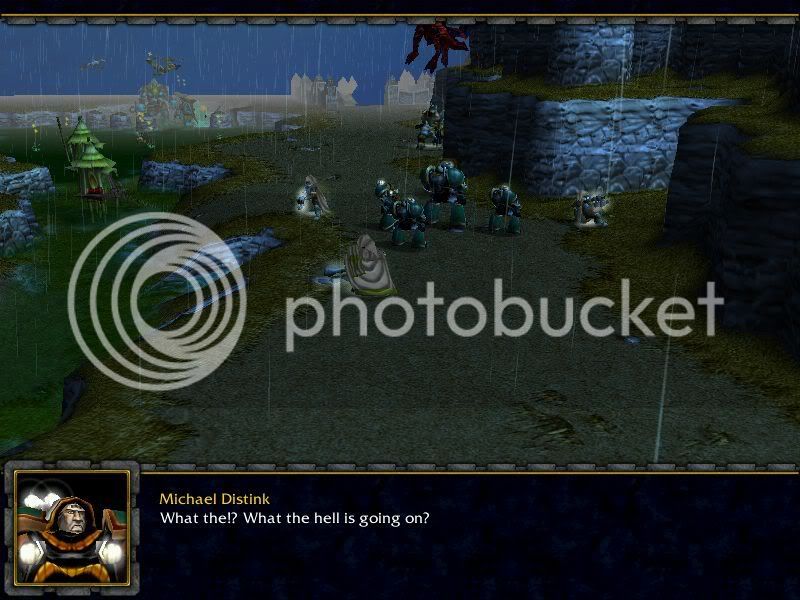 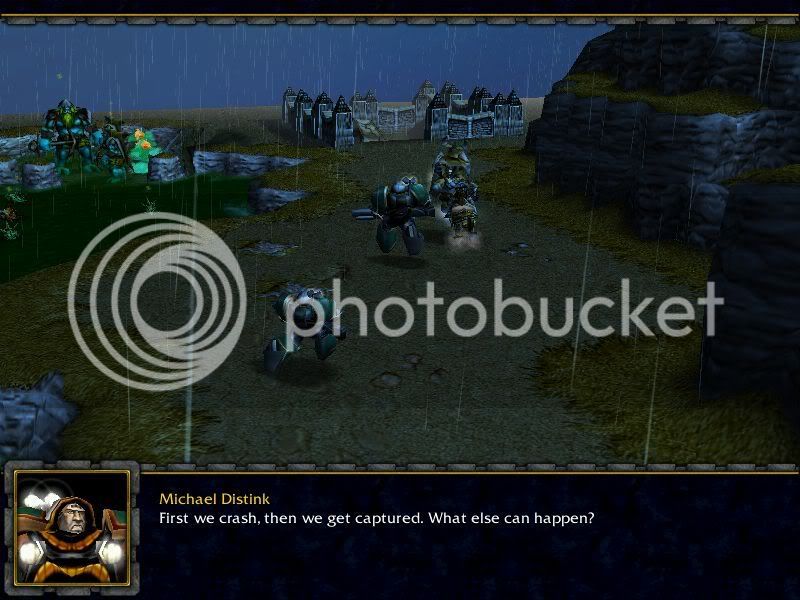 The Dwarves lead the Marines to Girdle Keep for interrogation.

I Cant Wait For It Man Hurry Up But Dont Hurry To Quick Make It On Of The Best Maps Ever!!!!

Wow, this looks like it's going to be an incredible map. I only hope that WoW players on Battle.net don't mistake this Worlds of War (WoW) for World of Warcraft. lol

O.O Awesome might i suggest you try to get it hosted by THW because its a great idea and everybody seems to love it so i can't see why they wouldn't.

Gath_Stormer said:
ya the battlecruser needs to be longer its not supose to be the size of a a dragon make bigger like Kjiverx said
Click to expand...