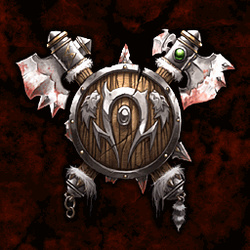 CHAPTER I is now available! If you played this previously, you may need to replay the Prologue.

Over 1000 downloads and 3000 hits! Thank you everyone for your positive feedback.

Nameless - One Orc's Saga (version 1.03) is a single-player campaign RPG, similar in style to The Frozen Throne's Orc Campaign. Play as Nameless, an orc who awakes in a dungeon with no knowledge of his past, where he is, or who his captors are.

As of right now, this campaign includes the Prologue and Chapter I. Together they provide about 3 hours of gameplay.

FEATURES
-Guide Nameless and his allies through a dungeon and the wild.
-Utilize unique spells and abilities, all of which are, to some extent, trigger-based - none of them are clones of existing abilities
-Fight dynamic bosses - they don't just sit there and autoattack!
-Join up with up to three other heroes along the way, for a total party of up to 4 completely unique and new units.
-A weapons and armor system
-Unique items
-A developing storyline and engrossing world

This is a developing project, and updates will add more!

Credits for all models and systems are in game, under the Quests/Info tab.

CHANGELOG
Version 1.02
-The Ruins cinematic and Final cinematic are now skippable. The Cell Block cinematic and second boss cinematics are still not, as they are very short.
-Added new quest requirements: both heroes must survive.
-Added a "lose" trigger. Previously, if a hero died, nothing would happen.

Version 1.03
-Chapter I added! This Chapter has about two hours of gameplay.
-Some of Nameless' and Sigismund's abilities have been tweaked. For example, Penance is now much more potent.

Version 1.04
-A few additional health and mana potions have been added to the later areas of the Prologue. They are in more obvious places, and drop from units and destructibles that are actually in your way, rather than off the beaten path.
-A resurrection system has been added in Chapter I. It functions much like the system in the Frozen Throne Orc campaign - there are Resurrection Stones around the map, and if one of your living heroes approaches one, after a few moments your dead heroes will be resurrected. You should still save fairly often, though, because if ALL your heroes die, then it's game over

. The Prologue still has no Rez system - it's only 45 minutes anyway.

Version 1.05
-Several bugs should now be fixed, including the Power Familiar running around during cinematics, and heroes casting spells during cinematics.
-Several items have been scattered around in the various destructibles of Chapter I.
-The respawn rate of enemies has been slowed from 2 minutes to 4 minutes.

Version 1.06 - 9/12/2011
-Fixed a memory leak that was preventing players from loading a saved game.
-Fixed a few erroneous tooltips.
-Reduced the HP and damage of the Waterbound Elementals and Poisonous Ampodians in the Prologue.
-Reduced the difficulty of the forest boss and final boss in Chapter 1.

KNOWN ISSUES
-The first Golem Event in Chapter I sometimes has issue. If units stop spawning, it may take a minute or so for the next wave to spawn. They WILL spawn, it just takes a while.
-Certain abilities lag when used for the first time.