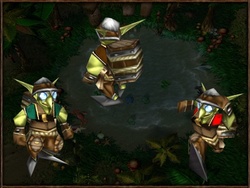 Originally made for Mr.Goblin's "Goblin's Tale", I've decided to release it because I found it rather nice. It is also somewhat of a tribute to Mr.Goblin, for all the art and other stuff he has done for me and for Bloodlust Studio's, the modding team we are both a part of. So yeah; Thank you, Mr.Goblin, and rock on!

Mr. Goblin's true name is unknown, and his biography is shaded. From what was recovered from his journal, he was a humble Goblin, living in Undermine on Kezan Isle. He found his life extremely bored, and secretly dreamed of adventuring and exploring the world for almost all of his early life. He never told his friends or family of this desire to 'break free' and travel across the world. He also had a favor to engineering, which he studied from his close friend, Yzaf, one of the most famous Goblin Engineers in Undermine. One day Mr. Goblin told of his dreams to Yzaf. Yzaf, who liked the young Mr. Goblin and his love for engineering very much, offered Mr. Goblin a wondrous offer - to give him his trusty old Zeppelin. Mr. Goblin gladly agreed, and promised Yzaf that one day he will return to Undermine as a famous explorer. Yzaf gave Mr. Goblin his famous wrench should he need to repair his Zeppelin, or even to sell it for a great profit. Mr. Goblin set off to adventuring the world, and on his travels he has found many wondrous artifacts, and discovered many beautiful lands. One day, he crash landed somewhere in Stranglethorn Vale. When he woke up from the crash, he didn't remember a thing, but has since learned much about himself and his travels from his old journal... He is now attempting to make a profit out of the legendary and powerful artifacts he has found in his journeys, and some say that he might even sell Yzaf's wrench to the right person, for the right price!

Please note that this model has NO attack animation. It was made to serve as an NPC character, and not as a hero or a warrior unit.

Please, give me credit for my work if you use this model in your project.