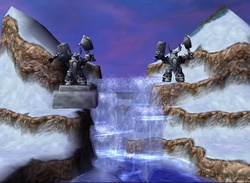 The entry is similar to other existing dwarven statues (Dwarven Statue, Muradin). The reason I made this one is because I wanted a statue that didn't show the character's eyeballs, that had a death animation in case I needed it to be demolished, and I also would have liked to see the mountain king in a more triumphant pose.

This model uses only in-game textures.

It comes in two equivalent versions: one with and one without pedestal.

You have permission to edit this model, please give credit to the authors.