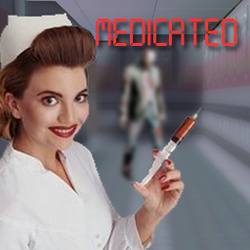 Medicated is a map where players take the roles of various employees for the Generic Corporation which may or may not be doing illegal viral research involving reanimation of living impaired individuals.

The situation in Medicated is that the virus in question (Virus X) has been stolen by a group of Conspirators trying to sell/expose/use it. Having noticed the situation and being none too happy, the Generic Corporation has placed the facility on lock-down status and given those within an ultimatum. Destroy the Virus or be annihilated.

All players in Medicated fit into one of two major groups at any given time in normal game play mode, and each time they die and are placed in the shoes of a different employee, that team is liable to change. They are:

Conspirators: You have decided to get with your friends and steal Virus X. Good for you. But all the doors are now locked and people want you dead. Imagine that. So how do you escape? Well there are 3 major links to the outside world. The front door, the side door, and the freight elevator. All of which are behind Quarantine Doors. To open them you will need to activate the all clear signal from at least 5 of the 8 security stations, and then make it to them. However there are likely guards waiting at these exits to stop you. Good thing the ones at the top of the elevator are yours! Although, nothing says you couldn't kill the others..

Loyal Employees: Monday just got worse. Virus X has gone missing and you've been told if you don't tow the line on this one, you'll hang from it. Quick! Find Virus X and get it to the incinerator at the disposal room by any means necessary! And don't forget to cure anyone you may find who is infected, whether its with drugs or a bullet.

Panic Mode(New as of 1.9):
In Panic Mode (under 6 players) the goal of the game radically shifts when the Generic Corporation announces that the PPB(parts per billion) levels of Virus X have reached an alarming level and they plan to Purge (destroy) the Facility. The players have a very limited time to work together and escape while their co-workers fall victim around them during Panic Mode. Additional players will increase the difficulty of this mode in 2 ways. (1) Every player shortens the available time by 2 minutes 25 seconds. (2) Random infections become more frequent.

Version Notes
1.5:
New event added to random events
Fix for problem caused by attempt at a fix in 1.4
1.6:
Fix for new event in 1.5
1.7:
Air vents introduced as an alternate means of movement
1.8:
Power generators and breakers added.
Power outages can now be intentionally caused and must be manually reset for random event.
1.9:
Various bug fixes
Stacking added for drugs(up to 3)
Added "Panic Mode" for games with less then 6 players
2.0:
Made some minor adjustments
Fixed minor issues
2.1:
Damage Values rebalanced
Zombies made much much slower moving
The Incinerator Console will now show you inside the Incineration Room
The game has had a lot of features simplified in order to become more friendly toward newer players

You may now right click on a door and the keycard should activated automatically if your character has the proper security clearance (Remember, Security Guards have highest and can open Security Doors with them but everyone elses just work on sliding doors)

You may now right click on a broken Security Console while holding a Tech Tool to repair the console.

While aiming your GUN you may now right click on terrain to automaticly uproot and move to that point instead of having to hit the H key first.