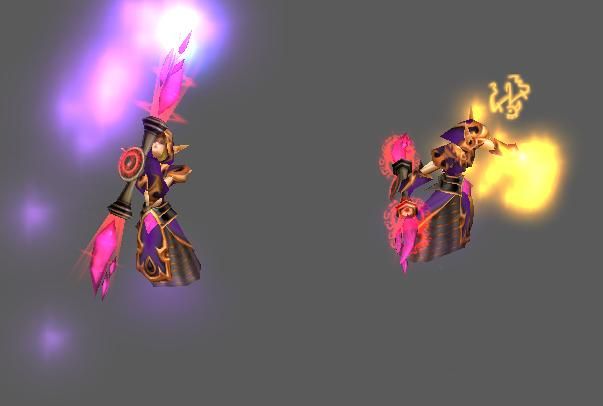 If you use this model, make something sweet to play with then, WC3 is almost on its deathbed, so that's your chance. No freaking copyright, do whatever you want with it.

And one more thing, about the reason for it was rejected - the staff. I just don't want to explain it to everyone asking "What's happened to your Jaina model, dude?", so here are the arguments why it should be if not approved, than at least properly examined.

Fristly, when you steal something, you steal either an idea or its realisation. However, you may steal both. What we've got here:

1) The concept is property of the Blizzard Entertainment, thus, since you are not Blizzard's representative, be so kind, shut up.

2) The staff itself was made from the Crystall Lamp provided in war3x.mpq. Yes, it seems the same like in Conjurer model here on the hive. Although it is not. "Mech are quite alike" - of course they ARE quite alike, the model originates from the same source and idea, isn't it obvious, um?

Therefore, niether the concept, nor the realisation belong to somebody I have to mention. You may suck my balls if you disagree.

Secondly, even if the first draft presented a year ago included materials made by somebody else, is it really an issue? Almost 99% of models here are based on somebody's work, no matter whether it is Blizzard's stuff or some dude from the hive. Stop freaking play law-obedient citizens then, it's bullshit. We all are criminals here.

How to import this model Sanity check More info Download
Reviews
11:22, 27th May 2011 anarchianbedlam: *sigh*.... You're really not very good at this whole "lying" thing are you? Well You claim that you did not ask for permission from Gottfrei because you made the staff yourself.... then why do the mesh and UV...
Read full review...

11:22, 27th May 2011
anarchianbedlam: *sigh*.... You're really not very good at this whole "lying" thing are you? Well You claim that you did not ask for permission from Gottfrei because you made the staff yourself.... then why do the mesh and UV wrap match up perfectly? You got in trouble for stealing the SAME thing last time... and you were warned about wow rips before that. You would think that by now you would realize that we dont want you to steal resources from other people. It's a shame too because that jaina model actually looks pretty good. If you just made an original staff for it. It would be approved, you would get rep and the admiration of others..... Instead you go and fuck it up with this CnP and bullshit story about how you made it from scratch....

You are getting neg rep and if you do something like this again, you will receive an infraction. or maybe even a ban.... i guess that would depend on how benevolent i feel that day.

Models 2 Icons 1 Maps 1
Your description reminded me a quotation someone said.
"Creative people are people that succed to hide their sources."

Models 3
However, it is niether necessary nor sufficient to be creative. You may create something absolutely new and be creative indeed. Or you may steal something and still fail to create something that seems to possess originality. I don't claim that I am a very creative person, but I laugh at those who think that if they had created something "original" in the past, than they became true gurus.

Models 3
You have got eyes but cannot see. Still think that the world is divided into black and white?Creator or thief - that's how you see it, don't you? I didn't steal and I did. Does this fit in your poor, poky logic?

You are many and I'm alone... So what? Do you think that the quantity, yet not quality is enough? There will be no credits given to anybody, because no one else made contribution to this model excluding the Blizzard.

Lets dot the i. A year ago the first model really included the staff from Conjurer and I did give the credits to Gottfrei. However, it was not enough. They need a "permission". OK, said I and erased the whole staff. Then created a new one from the Crystal Lamp. It seems to be similar to what it was, however it is not. The reason for it is that the concept of this model is blood elf mage in Arena 2 set from WoW. The staff, as well as the armour is a part of the set, and the concept does not belong either to me or to Gorrfrei. The present realisation is made by me alone. And what did I steal then, um?
Last edited: May 27, 2011

Icons 1
CeDiL that certain "someone" just happens to be Einstein.

Love the model, loved it ever since the first time I set my eyes on it.
Creative use of ingame textures, flashy spell animations and looks like it would fit as a awesome blood elf mage with arcane and fire spells.

Vehster,
[Crystalheart Pulse-Staff] is originally made by Blizzard Entertainment. A item dropped by Magtheridon in World of Warcraft.
[Staff of Disintegration] is the staff that spawns during the Kael'Thas fight. Diffrent item but same model.
Because this staff spawns during this fight it implies that Kael'thas and other powerful Blood Elf magicians weild this powerful weapon to defeat their enemies.
The fact that you two even discuss this is silly. This item is clearly made by Blizzard in the first place and I can understand why Ossus want his model to weild this weapon and not something diffrent.
Last edited: May 27, 2011

Vehster said:
I see much better then most people and I took the time to look at your model and confirmed what I have said.

World is divided into the state of dimensions, that is what I think.
You did steal but you did make your own as well.
My logic is far better then most people, trust me on this part.
I try my best to help the victims but in your case, your more of a childish russian troll.
And no I am not being racist for I know you from XGM.
So you refuse to credit even Blizzard?
You should credit Gottfrei so you can get this model approved, I do hope you learn and do not stay in this stupid state.

I wish you luck no matter.

If you require me to go further, I can easily go and get the proof you are currently demanding.
Click to expand...

Logically you should just leave this to the model moderator.
now go help somewhere else before you start a flame war with the creator, there are more important things in life than helping a person that clearly does not want help from you.
...
Ossus, make a new staff if you really want people to not accuse you of theft, otherwise its a very nice model.

Models 3
"World is divided into the state of dimensions, that is what I think."

It's not the matter of philosophy, it's all about that fake copyright, that masquarade that you have here. Don't try to impose that shit on me. I just want to share the model. For free and for as many people as possible. That's why it is posted on hive.

"You did steal but you did make your own as well."

And what? You steal, I steal, everybody steal. Why do you mention it only here then? Go accuse everybody on the hive of copyright violation then. Then it will be "fair".

"My logic is far better then most people, trust me on this part."

"I try my best to help the victims but in your case, your more of a childish russian troll.
And no I am not being racist for I know you from XGM."

which is equivalent to

"My dick is longer than yours". Didn't know that mature men like you, my dear alpha-male adult, still suffer from that sort of mental disease.

Models 3
So you write to Blizzard everytime you make a new model, don't you? That's ridiculous.

And, yes, you may go further. Prove me that it is stolen. Name what exactly I "stole". The concept, the realisation? What?

It is and it was an idea from WoW. Read it again: "There will be no credits given to anybody, because no one else made contribution to this model excluding the Blizzard", dumbass. I will not give credits to Blizzard, just because it doesn't make much difference.

Besides, you wrote the same thing the second time. If you don't want to post anything, JUST DO IT, that's the brief howto:

"I would say concept & idea of staff that you stole."

You would better suck my ballz of steel, punk. xD

Oh, ya, they look similar. Surprising? No. Look at http://static.wowhead.com/uploads/screenshots/normal/73595.jpg Again similar. Oh, ya, perhaps Blizzard stole the concept from poor Gottfrei. Or vice versa? Anyway it is bollocks.
Last edited: May 27, 2011

Models 1
I am sorry but this model is cool, I downloaded it off of XGM a long time ago but, I just don't think you should go about taking this so seriously if people have said that your'e stealing and you say you haven't, ignore them but, please do not disrupt the fairly friendly environment that the hive has just because someone says you stole this. I have not been on this site for very long but the way this site is to me, if someone joins they are usually welcomed as a friend, unless that someone goes on a ranting and raving spree, even though this model is very similar to the one off of XGM I give it a 5/5. Edit: If you are the one who created the one on XGM good job. Just seen that you are so good job again.

Models 2 Icons 1 Maps 1
Yeah i guess it was Enstein, thanks. Also ossus, everything that has been created so far, is inspired. Absolutely everything.

Models 3
Thanks, folks. I appreciate your support and I don't want to break the friendly atmosphere. However, I cannot stand being accused of what I did not do. Look at the picture from wowhead. It is exactly the same. Symmetrical duble-edged staff with red crystals and two circles of red runes. If you still do not belive me, try to replicate the staff. Perhaps you'll be surprised of what you will get.

Models 42 Icons 6
Finally I found her for me this model worthy 10/5 over rating... dude wish to see more!

kangyun said:
Finally I found her for me this model worthy 10/5 over rating... dude wish to see more!
Click to expand...

He stole this model. You could find it anytime on XGM guru, the russian site. The model is awesome, but it's not made by this guy.

Stefan.K said:
He stole this model. You could find it anytime on XGM guru, the russian site. The model is awesome, but it's not made by this guy.
Click to expand...

LoL I tot is make from him but I'm really like the mod... XDDD
You must log in or register to reply here.