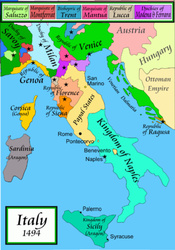 Ok, here it is. I know I shouldn't really submit it here, but I thought this way I can get more feedback and comments, so I may continue it with the help of someone as it seems I'm not able to finish the maps alone. I know that there are many things lacking and illogical along with tons of bugs.

Italian wars campaign takes place in 1500' in Italy, featuring the main battles of first 4 wars on the peninsula, caused by series of conflicts which involved many countries, Italian states, France, Spain, Switzerland and others.

Somehow I'm not happy with the gameplay, it looks too boring and I plan to rework it completely, most probably using some my systems from Godfall chronicles and stuff, but first I want hear some suggestions and opinions. I'd appreciate some terrainer for the next edition of the campaign.

OK, I hope I covered all

Moderator
00:53, 27th June 2009, by Linaze Italian Warz is a strategical campaign about Italy during the 16th century. The campaigns gameplay was rather simple but still entertaining, it was like Blizzard's campaigns, only with new techtrees. The terrain was...
Read full review...
Reputation Statistics
Page 1 of 2
Show Ignored Content
Page 1 of 2