Shadow_Fox said:
Ey im reading the posts!! and as for back on topic...these things seem to die lol/
Click to expand...

Well on the flipside, what are you up to Dardraak? Do you have any plans for what you will be doing next in the wc3 community?

Aha finally a non discussive post, here i wanted to post this picture before i answer deckboy: 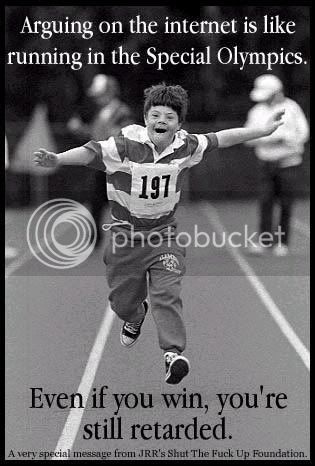 It illustrates more as you will see, this discussion is useless hence none of both parties is right and they will never agree, these situations are way more complex as both are saying, this war will do good stuff, but also cause bad stuff.

Anyways, im still mapping, only at slow rate since school and partying is absorbing time. And i like to do nothing, that will also count towards time absorbingness. I am currently working on 3 projects, still on wargame, i have revived an old project and im upgrading the triggering a bit.
Ill revive my wargame thread soon with some updates.

Maps 6
agreed .this argument will never cease unless one admits defeat...which will never take place. so lets stop the argument?

Heh. . .I think he just won the debate anyways. . .and only with one post!

Glad to hear that wargame will be back. . .I wanted to play that. . .
I'm nbot here much but I have a free weekend, so I'm posting alot right now. I do check my pm's though and respond to those.

Darkdraak...love that pic, well done As for Shados, you know a hell of a lot about debating. I would like to see both Shados' and DurotarLord's sources. DurotarLord, please remember all history sources are interpretations, not the real thing. I actually support Shados side of this arguement but I will try and be as fair as possible. Thus, America has in my opinion entered the Iraqi war for self gain (Sorry Darkdraak that your welcome back post has become a political arguement), hence there are no WMD's. "Torture" such as DurotarLord mentioned of using hot metal has been around since the dawn of torture, and also Gwantanamo Bay (sorry for mispells) is the US's allegid torture site. However Saddam may have tortured his victims, which under the Genieva Convention (sorry again for mispells) is morally wrong, the US have captured "terrorists" (in quotes because we have no idea if they are terrorists) since, I assume, Operation: Desert Storm (or whatever the one which Bush Senior started is called), or at the very least 2001 after 11/9, and have not released them to this day. I believe Farenhiet 9/11 is actually a very true representation of what's happening.

In Australia this term is not real lol. John Howard claims it is true but by careful disection of the word, how can you have multiple cultures in the one country. It's contradictory.

On a final note: From my faithful commedian George Carlin (an American)

Please argue responsibly, this is becoming a flame war.

Maps 1
The one thing i ask is that you not believe Farenhiet 9/11. its a compete crap source. Your listening to "facts" on the war by one of America's most misinformed and liberal of directors (although i will admit he has talent as a director). Like i said in a past post, he misquotes Bush and tells only half truths to make it seem like Bush is the bad guy.

Fahrenheit 9/11 i havent seen. But i did see Bowling for Columbine, and i must say he is very convincing. And he is very right on many points, only comment, he leaves out some critical stuff. JUST like the government does and just like most of the participators do. I beleive discussions are good, but not many people are willing to accept the others point of view.
This is mainly because of human nature, we dont like the fact that we beleived something that was only partly true (thats why religion still exists, DONT REACT ON THIS NOTE ITS A JOKE! (how right it probably is i dont want another religious discussion))
And this is the same reason why i like and dislike democracy. Democracy is a good system, better as most, BUT sometimes a country just needs a strong leader and a leader in a good democracy cant be strong if the country is democratically chosen. (and I dont think a 2 party system makes a good democracy, hence its choosing between two evils, or at least thats what i thought during the last american elections, I disliked Bush as much as Kerry)

But back to my main point (i tend to get on side roads when typing and forgetting my point out of sight) objectivity doesnt exist and people with power tend to hold away the negative sides, and those without power tend to magnify them (this is just in general, and this only accounts for smart people, dumb people just agree with whomever shouts the loudest, smart people consider all what is said to them)

Well as you can see i am a bit chaotic in this stuff. But i hope you get my point.

Maps 1
i think the best system is where you have one ruler. BUT that system only works if you have one strong ruler. because your not guaranteed to get a strong ruler and because a weak ruler can tear the entire nation down i think democracy is best.

Look at the Romans, when they had Julius Caesar as their Caesar they were unstoppable. had he not been murdered by his foolish friends he would have gone on to make Rome even more powerful than it already was. It would have taken centuries before anyone could possibly overthrow Rome with the kind of power he would have given her. But, then when weaker emperors rose to the throne Rome crumbled under its own weight.

One ruler gives one problem, people like Saddam can be those rulers.

Maps 1
thats why i said its bad wen u get a weak ruler which is why democracy is best. one ruler is only best when u have a truly strong leader, like Julius Caesar as i said.

Maps 1 Tutorials 1
Hi, just like to mention that I have never seen Farenheight 9/11, and I stand by my opinions completely. I agree with Shados in this arguement, but I see some of the things that Durotarlord is saying as true as well. Continue the debate, this is quite interesting.

brad.dude03 said:
Continue the debate, this is quite interesting.
Click to expand...

But NOT in this post - start a new one please.

DurotarLord said:
i think the best system is where you have one ruler.
Click to expand...

Ah Mr Dictatorship supporter I presume?
lol Depending on your point of view...Saddam could be a weak, but also strong ruler. Weak in that he needed to use force, but strong that he could use force at ANY time he needed it. Saddam kinda didn't give a crap who he murdered. Now your "one ruler" idea is dependent on who is doing the ruling. You cannot simply trust this single ruler to be 'good' if he is elected. May I remind you that Hitler was put into power in a purely democratic election. Now I'm not having a go at you DurotarLord, just making you think: How can you decide whether this single ruler will be deranged and have an excessive lust for power, or someone who will be good to the country? This is why the people in the past overthrew absolute monarchy (ie. Kings and Queens) in favour of a democratic system where power is "decentralised", or so they believe. They felt that by decentralising power, then they could stop despotism (where a single person rules with no laws to limit one's power). Dictatorship brings about deep set fears in people, because of what happened with the Nazis, and with communist Russia (I'm not against communism's theory however). I personally believe the best way to rule is by having a very decentralised power system, in that the people vote on laws being passed, etc. But then again I am a bit of a Marxist

Look, here's my views on threads going off-topic (Especially in my Off-Topic section ^^):

In an actual conversation with one or more people the conversation evolves over time, often going through many different topics before it reaches it's end, so why should a written conversation on the internet not do the same? If something has a set topic for a reason, i.e. a thread starting off a contest, then sure, don't go off on tangents, but in a normal thread - Why not?

Maps 1
Understand im not for a 1 ruler government. What i said was i think its best IF you are 100% guranteed to have a good, just ruler. However, since your chances of getting a good and just ruler are more like 10% or less, i think that democracy is the best system (as it gives the people the main voice in the government).

DurotarLord said:
Understand im not for a 1 ruler government. What i said was i think its best IF you are 100% guranteed to have a good, just ruler. However, since your chances of getting a good and just ruler are more like 10% or less.
Click to expand...