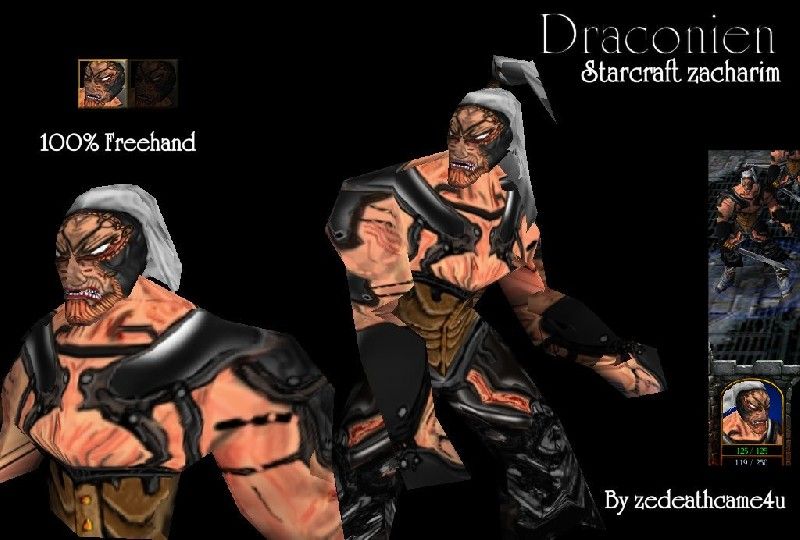 This bundle is marked as recommended. It works and satisfies the submission rules.
View usage Statistics Legacy download
Long time I didn't post anything there(thx homework -.- )I did this skin for the Starcraft mod I'm workin' on.He's the Draconien's Fallen, a powerfulll ranged unit which poisonned his ennemies. Enjoy and don't forget credits if u use it. Oh yeah, 100% freehand Textures\HeroDemonHunter.blp

THE_END: Great skin, that face is so crazy evil

Me likey Worm will say somin nice i bet.

Models 28 Icons 1 Skins 7 Tutorials 1
Very good, I like the screenshot because you used my model.

This one is pretty good. I especially like the face.

I don't know how it'll fit into Starcraft, but it's still a damn good skin.

Skins 1
its awesome 5/5 but that one black line on HIS right arm looks kinda wierd alone... u can see each pixel

Models 1 Skins 5 Maps 1
Good work, but I dun like that sort of skins ("Ugly" - Theme) If I may call it that.. I would like if someone made "nice" skins (Like new clothings and not that monster-look ;P) - I know that wouldn't fi into warcraft though, its a war game.. a babe f.ex. wouldn't fir in 4/5

Skins 3
overall good job, but you got lazy as well
Generally it looks nice, except for the armor, seems too "simple", compared to the rest.

Also, it should at least look worn, to preserve the post-apocalyptic look the rest already has

Models 1 Icons 54 Skins 28
i like everything exept for the hair, great job!

Skins 2
i doubt his hairs or the icon are 100% freehanded, especially the icon, its a 100% cnp. on the other hand, the freehanding job on a global scale seems good, but i'd pay an attention on his tights opening where there is something not really recognizable with red lines on it. his stomatch area have a nice corset concept. on the skin, it looks like you got somewhat loosy and lazy.
you might have wanted to pay more attention to his neck area, where its poorly detailed and shows up very bad in the portrait. his face is spooky, but id pay attention to the nose, it looks strange, along with his red lips. i dont suggest doing black n white teeths like you did, it looks rather cartoonish and far from reality.

Models 5 Icons 5 StarCraft II Resources 1
Great skin
You must log in or register to reply here.