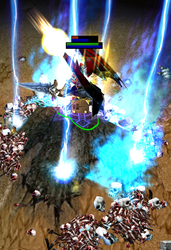 Omnislash your way to all sorts of Omnislash derivatives:

Create your own Omnislash spells with ease.

The Omnislash System is a system designed to handle most practical cases of how most Omnislash derivatives are handled, including filtering out flying units, allies, magic immunes, and such. It is also capable of having more than one Omnislash instance for a desired unit, if the user so wishes.


v.1.0.1 - Removed the udg_Omni_Trigger array variable in favor of using real events.
Elevated the importance of the udg_omni_abil array variable for filtering out
triggers that need to execute.

Changed the last parameter of RequestOmnislash from
to


v.1.0.3 - Changed the name of the bundle from "Omnislash Template" to "Multiple-Target Slashing Template".

Changed the behavior of the function RequestOmnislash so that the last parameter takes a trigger instead of a boolean.


v.1.1.0 - Recoded everything from scratch. Backwards-compatibility broken but its' now easier to make an omnislash instance much more effectively.

No longer has the real-variable events.


v.1.2.0 - Revisited/rewritten the entire resource bundle to be completely GUI. (However, performance may be affected due to the rewrite).

Removed backwards compatibility (They will be introduced when the need arises).

Added comments on how to use the resource.

Now only goes with versions 1.29 and up (This is due to the "new" native retrieving the invulnerability state of a unit.)

Removed the ability to easily define the animation to be played when slashing.

Reverted name back to Omnislash Template.

Reconverted the GUI triggers into pure JASS. (Removed triggers that had no apparent
functionality to the user.)

Edited Changelog 1.2.0 (This is due to the "new" native retrieving the invulnerability state of a unit.)

Added some needed comments on some more dubious variables.

Updated import instructions to include the system code into the map header.

Now includes a more vibrant terrain (though not all), and respawns all dying units (revives dying Heroes).

Improved the comments in the demo triggers.

Updated screenshot image​
You can make this into a passive ability, active ability that targets the ground or object, create some sort of target-only multi-slash, or even make it heal allies while appearing to slash. (It's all up to you, this just assists in making the omnislash-like spell that you desire.)
Contents
Reviews

KILLCIDE
It would be great if you can make the API shorter and more user friendly.
Read full review...

Dr Super Good
Comments and Suggestions: Potentially useful system for anyone who likes the Final Fantasy 7 style Omnislash concept. Easy to use, import and does a pretty good job at it. A possible improvement would be settings to allow for smooth unit movement...
Read full review...
Reputation Statistics
Show Ignored Content