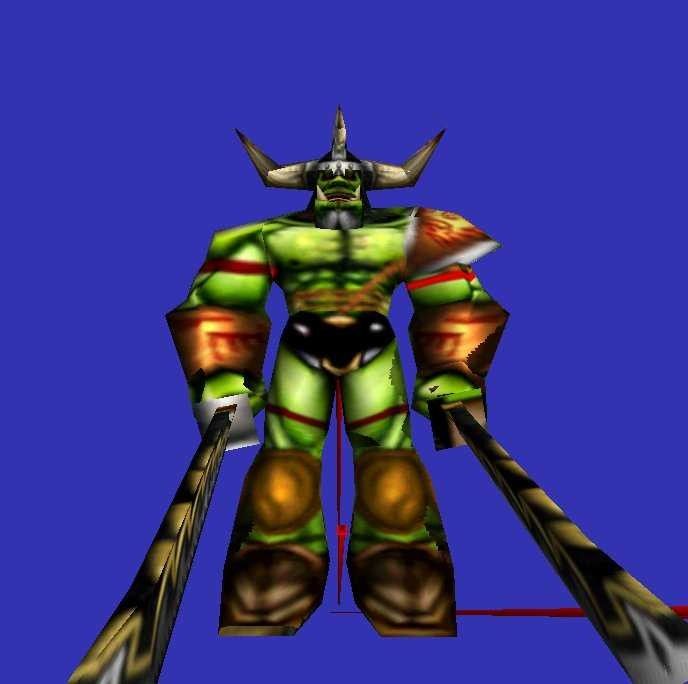 Models 24 Icons 1
This is the final Maim model I will be using. A Rend model and a final Blackhand model is coming up in a few more days.

he is only wearing a polished pair of metalic underwear.

I really don't know why you felt the urge to put a geomerge in the Downloads section...

frostwolf that assasain is really very good and usefull :roll: 8)

It doesnt look that great
I also would like to point out that assassins were used as a special operations type during war where men were scarce
This is more of a Mercenary, since both were hired but mercenarys were used as bought armies (hessians)
You probably dont care but it bothers me for some reason (oc lol)

Models 29 Icons 1 Skins 7
I like it, but it could use a little more work on the skin, and why are there two swords? Doesn't the grunt use 1 axe? That will move weird in game, nice horn though!

And about the skin, well need help there since me not good at it.

Thanks for all the suggestions.

Maps 3
Hey frostwolf. Sorry für spamming your model-threads, but i couldn´t find another way to reach you (Who reads Private Messages these day?).

I´ve only just noticed that there are many, many Orc-Models online that fit very into a "Lord-of-the-Clans"-Scenario. I´ve been working myself on such Project ever since WC3 was out. Then why isn´t it out yet you ask? Well, i don´t spend much time on it but at least i never stop with it to start something new.

Currenty i have about 75%-80% done, working on the 9th of 11 maps (#10 is a small map, and #11 the outro). The Campaign will be released in german langugae first, without voice acting. But i´ll look into it that it will be translated properly.
for more info (in german): http://gods.wariii.gamigo.de/ or http://war3-forum.gamigo.de/showthread.php?s=&threadid=40807

Now what i want: i know, you upload models to let others download them and do with them what they want as long as they give credit to the creator. But i´m still asking for full permission because i believe there are many people out there who create their own LotC-Project (maybe yourself/the one on wc3c.com-forums) and don´t want to have two or more going on with the same models.

Maps 1
cool model. i think it would look not as good with just one sword cos well..... errr cos i said so! isnt that good enuf?

cool model, im new at importing and i dont kno how to get the paths

You need a better sence of good skins!

I used your model in my map. Feel free to check it out


Godgodessrelic said:
I used your model in my map. Feel free to check it out
Click to expand...

I'm can't even get the model to work
how were you able to succeed in having it function?
You must log in or register to reply here.