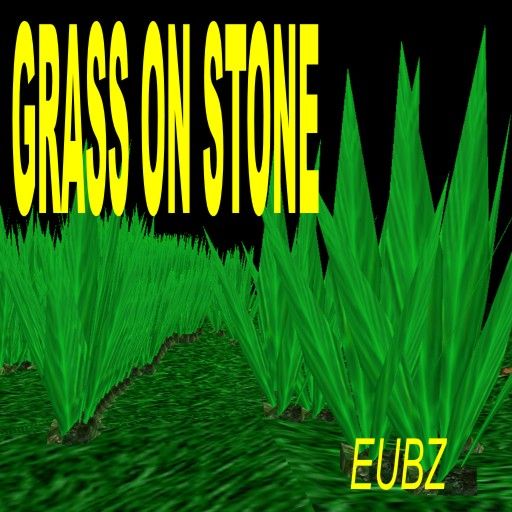 This bundle is marked as approved. It works and satisfies the submission rules.
View usage Statistics
This one is a doodad used as it is...the animated Grass on stone is now included here... Thanks to rysnt11 for animating the model...

How to import this model View in 3D Sanity check More info
Reviews
03:26, 3rd Jul 2011 anarchianbedlam: too simple, why is the 'rock' a cube? and the only difference between the two models are the single extra leaf. needs work. but could be useful for terraining EDIT: works ingame, simple but i guess it's useful...
Read full review...

03:26, 3rd Jul 2011
anarchianbedlam: too simple, why is the 'rock' a cube? and the only difference between the two models are the single extra leaf. needs work. but could be useful for terraining

EDIT: works ingame, simple but i guess it's useful for terraining.

Models 1
Cool, it's pretty useful in my opinion. Um before I rate it why is it growing out of a stone? Is it supposed to be for ruins or something like that?

That grass is stoned 3/5, simple, yet useful

Monkeyladboy said:
That grass is stoned 3/5, simple, yet useful
Click to expand...

On the topic, i think this models neat, haven't tested it yet...testing--

looks alright, though i do think lazy people may have problems of it growing from a rock. its not animated,so its not meant to be a unit so u could just put it deeper in the ground and have no problem with it ''growing from a rock''. if u want it as a unit use height triggers. how ever, for lazy ppl u prolly could change that to another color like mixes of light and dark mossy greens? perhaps removing the small cube on the bottom all together? turn it into a small mushroom with a poke-a-dotted top? i dont know... =/

also, what ''previous'' model monkeyladboy? iv never seen the earlier version of this, if there is perhaps u could link it?

this is ok, theres alot of plant models in the UTM though, so try and look at some of those for example, but dont infringe on creditz! mabe try to make a new animated plant! theres no such thing as too many animated plant models!
i think every body on this site should agree!?!?

Models 1
Uhmmm simple model, for some people it's useful for some not. 3/5 for your hard working on this mode, mb some would use it to any Island Troll Tribes or Jurassic Park maps or something..

grass out of stone lol, i read some of the posts above and i agree with that fix what is said above, yet I think its a very useful model

Simple and useful. Like a lot of your models.

Spells 10 Tutorials 1
This just looks awful. Screenshot shows a bland and uninspiring plant with only a single variation. The rocks at the base of the plant don't make much sense, raised or lumpy dirt would have been a better choice.

Don't mind if I do.... If you were going for what it looks like you get a gold star.
XD
You must log in or register to reply here.