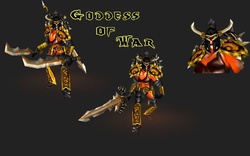 Long time since I uploaded a model.
This model is an total remake of this model. And it has much more. It has two sets of animations, the normals for two one-handed swords (demoness) and the ones for the two-hand sword (blademaster). I worked my ass of to get all the animations and geosets right.

Also, special thanks to Frankster, as his Bloodelf-Swordsmaster model inspired and helped me how I could do the morph animations.

Update: Added a helmet to the model so it looks somewhat more special. Too lazy to make a screenshot though.

Update: Added some fancy shoulderplates and some other little tweaks.