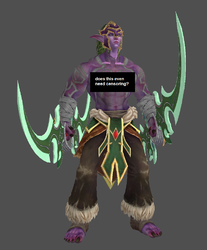 In this map, due to complains on the Warcraft III Reforged forums regarding the Female Demon Hunter character, I created my own Demon Hunter skin setup with a new model (Illidan with Naisha's head ripped onto it) and new audio files (generated with Google's WaveNet system free testing trial thing).

The audio files were also doctored in Audacity after they were generated.

This map is being uploaded here as a template because this character includes a Reforged Beta model file which cannot be uploaded to the Hive (when last a checked a few weeks ago) as well as Reforged-only .flac custom audio files.

So, for the record, if you are not playing the Reforged Beta this map might not work for you. Also, in the past, the Reforged Beta model format changed, so it is also possible that sometime in the future this map's custom model may no longer work.

The following video was created covering this map's contents, as a way to give access to the video for the people on the Reforged Beta forums who were complaining about the female Demon Hunter.


I leave the decision regarding whether I created this content seriously or as a parody as an exercise for the viewer.
Contents
Reviews

Daffa
Might be useful for some, so... Substandard until this can be moved to sound forum.
Read full review...
Reputation Statistics
Show Ignored Content