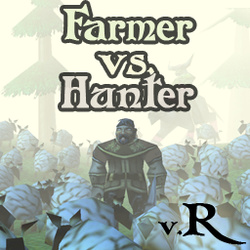 So most of you probably know the original Farmer vs Hunter map, as it is oftenly hosted over Garena and Battle Net. Those of you who played it more than once might have noticed, that although the original version is really fun to play, it is rather imbalanced and issues like drophack, -clear command cheat and tower-occupied spawn points make it completely unplayable once the players decide to abuse them.
Since me and a friend of mine (who is not yet registered on the Hive) loved to play the original map, we decided to fix these issues in a fast remake that would not only bring the long desired debugging and balance, but also a whole new map to explore.

Long story short, what originally started as a weekend project prolonged into a few-months-taking remake which does not only bring the fixes we originally planned, but also many new gameplay mechanics and improvements that bring the experience this map can create into a whole new level!


Main Improvements
•No Drophack! - In the original version, Farmers could get into places where Hunters could not - which could make them completely invincible (This was achieved by building under your farmer, which would drop him into the nearest pathable location - often behind otherwise unpathable trees).
•More Balance! - In the original version, it was enough for Farmers to build a half-decent wall and a Death Tower to become unconquerable. It was possible to build these in about 5 minutes of gameplay if you were lucky.
In our version, the Farmers have little to no chances of defending at first, and they need to rely on hiding, denying and escape routes.
•No more issues due to Unit Limits! - In the original version, you had to build a huge army if you wanted to catch and defeat the hunter. Not only the units became almost completely unresponsive once you got too many of them, but they could also lead to unpleasant FPS Drop and even Game Crash once you pushed the limit too far. In our version, you only have to build one unit (a Golem) which you must upgrade and equip with spells in order to catch and defeat the Hunter. Normal units are still present, but they are controlled by an intuitive AI, so you don't need to worry about micro. Even if you get too many of these, your units are still as responsive as ever. Not even getting too many animals can slow down their responsivity.
•No wolf-summon hack! - Hunters were able to summon Feral Spirits through trees and walls, right into Farmer's bases. This is no longer the case.
•Farmers can no longer prevent their animals from wandering around with the 'Hold Postion' command! - This brings a new gameplay mechanic which we like to call 'Livestock Management'. You need to build walls for your animals and make them spawn in the right directions, so they don't get in your way or give up your position by wandering out of the base. This new mechanic is also the reason why -clear command is no longer present.
•New strategies, new mechanics! - Farmers hidding their farms all around the map or turtling in one base? Hunters fighting the Farmer's lategame forces, or running around the map, hoping not to get caught? All strategies have their pros and cons and the game is adjusted accordingly!
New units and items create new possibilities! Even if the Farmers turtle too hard, Hunters can lay siege to their base with Bombard Towers or explosive potions. In order to kill the Hunters, Farmers can upgrade their Golems with projectile-based abilities or they can just rely on the mercenaries!
•Much more! - You will find many things has improved since the original version!

Please, do not play with less than two Hunters and five Farmers (5v2)! The game gets less fun and less balanced if you do!
If you find any bugs or imbalances, we're absolutely completely open for critique and every feedback is very welcome! This map is no longer in beta stage, but that does not mean we're not working on it anymore!

In any case, thanks for playing and vote 5!

Changelog
Ver. 2.8 (5th July 2012)
-Fixed the Anti-Drophack system. It didn't work in certain cases but it should be flawless now. (thanks to sheep for diagnosing this)
-Fixed the spawn-stuck-bug which could make farmers/mercenaries stuck after spawn. (thanks to sheep and Tanasren for pointing this out)
-Increased Peon movement speed and removed their bounty award.
-Decreased Exploding Potion range
-Changed the descriptions at Farms (Tanaseren again).

Ver. 2.9 (6th July 2012)
-Removed Magic Wall and Hunter that spawned for the red player at start. Sorry about that.
-Cliff-height damage bonus for towers increased to 30%
-Wind Walk Potion duration decreased to 20 seconds (60 when -progame mode is active)
-Price of Sappers reduced to 30 gold when -progame is active.
-Increased stock maximum for Sappers to 2 and decreased replenish time.
-Some minor terrain changes were done as well.

Ver. 3.0 (11th July 2012)
-Nerfed Attribute Bonus a lot
-Sheep and Pigs should no longer glitch out of your base when they upgrade
-Magic Wall should no longer be able to change it's position when erecting it.
-Based on a popular request, hunters got nerfed a bit when "-progame" mode is not active (they get less stats per level-up).
-Fixed the bug that made Invisibility Potion disappear from the merchant after buying it.
-Animals will no longer stay in game after kicking a player - they will die after 40 seconds, along with rest of his/her units.
-Maximum-animal limit is now fixed on an unchanging number (3 players - 300, 4+ players - 200. Before it was: 3 players - 300, 4+ players - 1050/Number of Players).
-Box-Throwing towers are a bit stronger now
-Decreased mana cost of Flare Gun
-Fixed description for Goblin's tree-boom abilty.
-Goblins no longer explode upon death.
-Peons now have a very short-ranged blink
-Armor of Magic and Iron walls set to 5.

Ver. 3.1 (17th July 2012)
-Randomization elements implemented! Some parts of the world gets randomized at start, making the map a little bit different every game! (Of course, this is limited by Warcraft's engine (it's not possible to change cliffs or minimap in-game), but should add some variety nevertheless).
-Nerfed Hunters some more in non-progame mode (they get even less stats per level up).
-Golem upgrades are better in non-progame mode (hit points upgrade increased from 40% to 60%, damage upgrade increased from 5 to 10, attack speed upgrade increased from 12% to 15%).
Let me know if you think this is enough or not!
-Maximum level of Far Sight decreased to 2.
-Area around pools is unbuildable now.
-Pools can be destroyed.
-Pools can be temporarily disabled with Poison Wall ability.
-Poison Towers can one-shot Farmers again, but...
-...Shared True Sight for Farmers gives ability to see through trees and cliffs, so it's easy to avoid these poisoned towers once someone researches this.
-Added -cam command which changes the distance of camera if your computer is strong enough to handle it (for example: -cam 2000).

Ver. 3.1b (17th July 2012)
-Fixed a bug where an area in the bottom-left corner of the map was sometimes unpathable although there was no debris there.

Ver. 3.2 (31th July 2012)
-Goblin Mines now take 7 seconds to activate. During this time, they are visible and won't explode when destroyed.
-Potion of Healing now has 3 minutes cooldown.
-Potion of Wind Walk now has 20 seconds cooldown.

Ver. 3.3 (7th August 2012)
-Huge balance changes: Basic Arrow Towers are much weaker at start, costs more and take longer to build.
-Hunters have much more HP at start, but gain less HP for leveling up than before.
-Increased damage for most mercenaries.
-Changed repair time and hit points of most towers.
-Shared true sight no longer takes food
-Golems no longer have Wind Walk buff all the time.
-Added "-i" command which shows the player's total income and counts his/her animals.
-Fog is less dense now, allowing players to use greater values in the -cam command.

Ver. 3.4 (8th August 2012)
-Bombard Towers are much stronger and a bit cheaper now! But...
...Non-tower buildings and Flame-Arrow Towers now have explosion-proof design that makes them immune to Bombard Towers.
-You can only build 15 Flame-Arrow Towers.
(This should help the Hunters counter tower massing strategies).
-Horn of the Clouds is cheaper, lasts 9 seconds and has bigger range, but only two horns can be sold during one game.
-True sight is a bit cheaper.
-Box towers are cheaper.
-Fixed hotkey for peon's blink.

Ver. 3.4b (9th August 2012)
-I've realized the randomization elements never really worked. Things were the same every time. Should be fixed now tho!
-The Hunters got a great nerf - they get less stats for level-up and they level up much slower once they reach level 6. Attribute bonus is also much weaker now.
-Some terrain has been changed, mainly the bases on top-right.

Ver. 3.5 (12th August 2012)
-Previous Anti-Drophack System allowed players to drophack in a different way. This should no longer be possible and the map should be 100% drophack free now!
-Farmers now have it harder to deny themselves. It's still possible, just not as easy.

Ver. 3.6 (25th October 2012)
-Hostfix command has been removed as it could cause the game to crash.
-Maximum level for Hunters has been set to 8 - This should give the Farmers some chances if the Hunters farm too much.
-The bounty for Farmers gets decreased with deaths. So if there are noobs who feed too much, they'll eventually feed less and less and less...

Ver. 3.7 (3th January 2013)
-Hunters can now have only one wolf summoned at a time. Wolfs are much stronger tho and additional levels toughen them up exponentially.
-Small cooldown (3.5 seconds) has been added to the Exploding Potion.