Maps 2
Hello guys I've been in the request forum if anyone can spare a Europe map but since no one responded and they said they I should make it myself so here is the terrain. The Iceland, British Isles, northern part of Africa and Asia Minor is still not finish and its still its not finished.

What can you say with this wip? Is it good?

Maps 4
Good as in representing the appearance of Europe in a decent way? Certainly.
Good as a terrain? Not at all.

Don't get me wrong, it's something of a start, but you'll need much more detail
to make it look "good."

Models 32 Icons 3 Packs 1 Maps 5 Tutorials 1
He probably asks only about outline, not the terrain itself

Icons 1 Maps 8
Dunno about the other countries, but I'm pretty sure Portugal could use more work =P its bottom left littoral hasn't suffered THAT much from erosion xD

He probably asks only about outline, not the terrain itself
Click to expand...

Which is exactly why I gave my answer in two variations.

Maps 2
The terrain is bad so yep, I really need a lot of work to do. Thanks for your comments and suggestions.

Its my first time to make a terrain.

Models 3 Icons 65 Packs 3 Skins 27 Templates 3
I'd tell you to take a closer look at Europe's map, it's not that bloob-ish and fat.

Don't be afraid to use brush size 1 or 2 for smaller detailed areas.

Models 32 Icons 7 Packs 1 Skins 5 Maps 36 Templates 1
Hmmm... it definitely looks like Europe. But only in eyes of an European.

1. Scandinavia is way too wide, it should be taller (North-South)
2. The Northern part of Africa should be bigger (it should spread more to the East(Tunisia almost touches Sicily)).
3. Aegean sea should me smaller compared to Black Sea.
4. Italy actually is even more diagonal than you presented it.
5. Baltic states should be smaller (compared to Finland).
6. Black Sea should be more to the East (If you draw a line down from the Eastern border of Finland to the South Bulgaria should fit between the line and Black Sea.

Enough, I do not bother to look up for more errors.

Models 147 Icons 1 Packs 4 Skins 2 Maps 1 Spells 3 Tutorials 1
So, you need a Europe map? I got a template for you which i made for another request. It is kinda big though, and you will need to use the JNGP editor to save it, since size is larger than what the vanilla editor allows. Not a big deal though since everyone should be using it. It is based on a heightmap drawn from an actual map, so it is 99% accurate. Topography is also very accurate, though you may need to spend some extra work touching it up. Attaching it below.

Maps 8
I don't expect most of the small islands to be in there, but you gotta add at least the Faroe Islands.

Maps 2
I tried using palm trees because it makes the Iberian Peninsula more drier or tropical.

apcrabnightlive said:
I tried using palm trees because it makes the Iberian Peninsula more drier or tropical.
Click to expand...

So, you need a Europe map? I got a template for you which i made for another request. It is kinda big though, and you will need to use the JNGP editor to save it, since size is larger than what the vanilla editor allows. Not a big deal though since everyone should be using it. It is based on a heightmap drawn from an actual map, so it is 99% accurate. Topography is also very accurate, though you may need to spend some extra work touching it up. Attaching it below.
Click to expand...

Thank you for sharing your awesome template but I will use mine. Your map is really great and it inspires me to do work for more.

Edit: Could I use your tileset because it really looks more realistic to me than the default tilesets.
Last edited: Feb 10, 2015

Models 147 Icons 1 Packs 4 Skins 2 Maps 1 Spells 3 Tutorials 1
Ofcourse! Go ahead. I have to ask you though, have you ever tried using heightmaps? Basically, in wc3 it is possible to take a black and white image and turn it into terrain data. Really useful when you need a terrain based on a map.

Maps 2
I don't know how to do that. Its my first terrain.

Models 1 Icons 1
The WE allows you to use heightmaps for terrain? Since when?

Step 2: Create a map with the dimensions you want, with deep water level and LordaeronSummer tileset. It is very important that it is Lordaeron Summer, otherwise it will not work (you can change it later).

Step 3: Create an image wich has the same dimensions as the map, except +1 on each axis. So a 256x256 map needs a heightmap with the dimensions 257x257. Make the background black, and start painting with grey on it. Here are some examples of how it might look:

Step 4: Save the image as .tga (using photoshop, gimp, or similar). Open the Heightmap tool you downloaded, and enter the paths of your map and .tga file. Save the converted file as war3map.w3e.

Step 5: Open your map using WinMPQ. If you cannot find the map when browsing, make sure to set "file formats" to "all". Find a file named war3map.w3e and remove it, then import the new file you just generated. Close the MPQ editor and try opening the map in the editor. Your terrain should now be shaped after your image. Edges might be a bit rough though, so you want to sweep over them with the smooth tool a couple of times. Try tweaking the brightness and contrast of the heightmap until you have one which works well. After the heightmap is properly imported, it is safe to change the tileset.

IMPORTANT NOTE: As heightmaps can make the terrain angles surpass the maximum allowed by the editor, you need to use the MiscData hack to remove limits on cliff steepness. Otherwise the editor will crash when you try to edit the terrain where it is too steep. You can find the file attached to the bottom of this thread, and paste it into C:\Program Files\Warcraft III\UI. If the UI folder does not exist in your wc3 directory, you can just create it. Happy terraining.
Last edited: Mar 4, 2015

I'm no stranger to heightmaps (I have a professional license for WorldMachine 2.0), I just thought you meant that Warcraft 3 allowed you to import heightmaps inside WE directly.

Models 147 Icons 1 Packs 4 Skins 2 Maps 1 Spells 3 Tutorials 1
Yeah, still, it is quite nifty and i am surprised so few are using it. WorldMachine is a cool program, perhaps you can crank out some wc3 heightmaps out of that aswell.

Maps 2
Thanks to Fingolfin he helped me make it more beautiful with his awesome tileset and trees. 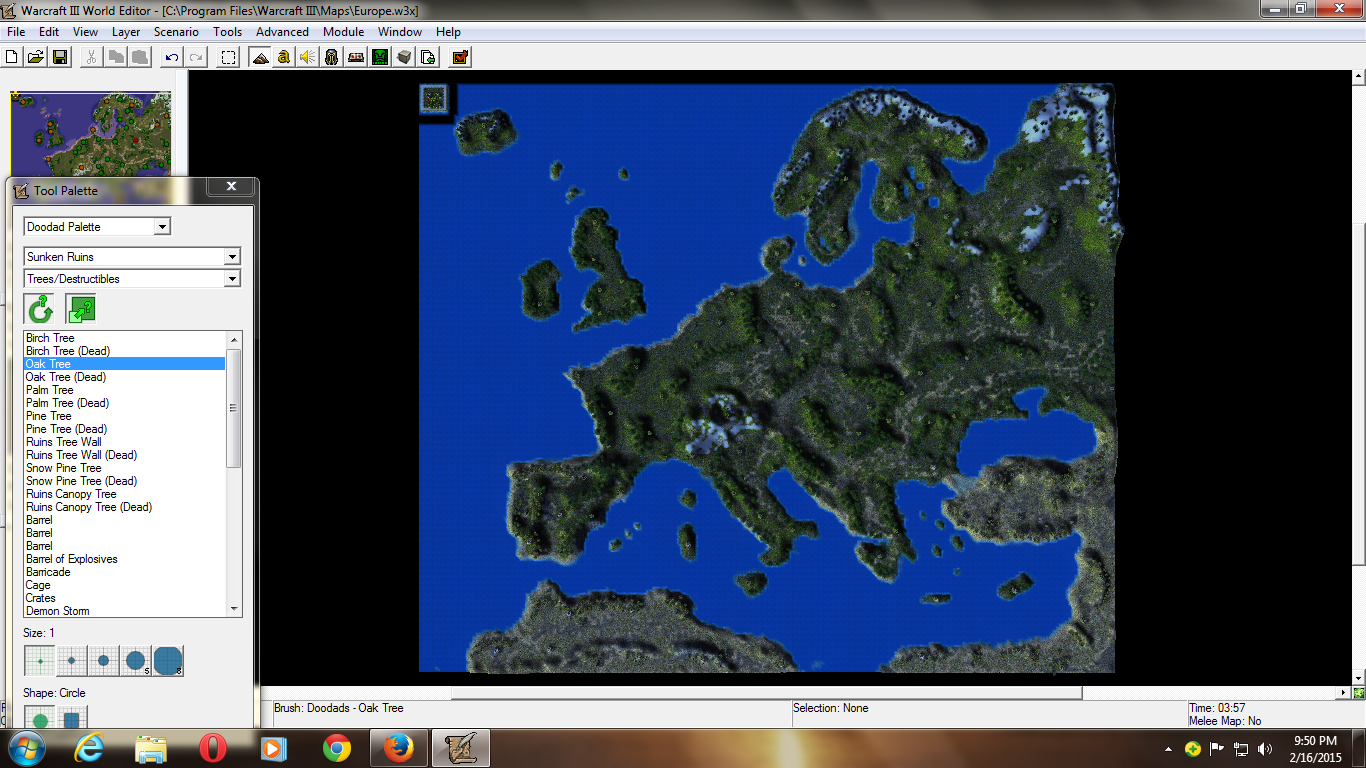 Models 147 Icons 1 Packs 4 Skins 2 Maps 1 Spells 3 Tutorials 1
Looks great. Britain, spain and turkey are all quite accurate. However, norway is supposed to have a bulge pointint inwards at its top/center, rather than outwards, and you need to work on the black sea. Right now, it's top is kind of inverted - instead of having one bay shooting out from the top, you should have one each top side, surrounding the crimean peninsula. Study some images. Italy could also use some refinement, but i can see why you'd not make it as thin as in real life, for playability reasons. Overall good work.

Maps 2
Thank you for your opinions. It feels good when someone criticizes and appreciates your work. Yeah I'll be working with the Black Sea after my exams today. TT_TT

Maps 2
I lost my map because my computer was formatted. I don't have any backup. Why should this happen?

Maps 2
I tried checking my paste bin but I don't have one in there.

Maps 2
Well this map is gone now but thank you for your reaction.
You must log in or register to reply here.

How best to represent the whole world in a map?