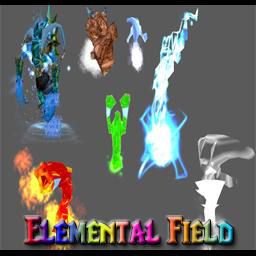 This bundle is marked as useful / simple. Simplicity is bliss, low effort and/or may contain minor bugs.
View usage Statistics Legacy download
Elemental Field
Objective:
Win the game when heroes kill up to 40
The Map Contains:

How To Play:
1-Pick your element!
2-Kill other players to achieve levels(MAX 20 LEVELS)!
3-Buy itens to get Strong!
4-Have FUN!
The Elements:
WindCutter

Some Hero Skills:
I will mention only the first levels
Eye of Tornado:Activate Eye of Tornado to roll up every units in 700 AoE, causing 35 damage per second to nearby enemy land units.Drains mana until deactivated.
Devotion Aura:Gives 1.5 additional armor to nearby friendly units.
Mana Burn:Sends a bolt of negative energy that burns up to 50 points of a target enemy unit's mana. The mana combusts, dealing damage equal to the amount of mana burned.
Wind Illusion:Confuses the enemy by creating 1 illusion of the Tornado. Dispels all magic from the Tornado.Illusion deals 20% of original damage and takes 2x received damage.Lasts 60 seconds.
Wind Walk:Allows the Elemental to become invisible, and move 10% faster for 20 seconds. If the Blademaster attacks a unit to break invisibility, the attack will do 40 bonus damage.
Burned Elemental:

Flame StrikeConjures a ball of flame that throwed at target position,ground units for.Deals 100-200 damage,deals 4 damage per second after the ball explodes for 8 seconds.Minimum range of 200,if the target position is less of 200,the effect will not works.
Lava Bomb:Hurls a rock of lava at a target. The rock breaks upon impact, splashing a powerful flames on nearby hostile units.Decreases armor by 3; deals 75 damage per second to the primary target; deals slightly less damage to nearby targets.Lasts 2 seconds.
Volcano:Causes the ground to erupt into a massive Volcano. Every 5 seconds, a wave of molten rocks is hurled from the Volcano at nearby ground units and buildings, causing 100 damage to each target and stunning it for 0.50 seconds. Buildings take 2x times more damage from molten rocks than units do.Lasts 35 seconds.Cast range of 800.Area of 400
Essence of LavaInstantly,restores 90 hit poitns to the Burned Elemental.
Immolation:Burns nearby enemy units for 5 points of damage per second.
Credits:
Thanks to:
Tarrasque
Dan van Ohllus
Mc!
For the Models.(Other models, the authors were not found)
Changelog:

Icons 2 Maps 12
Yea I've gone through your map @@
and don't know why, only -hero fire works for me
-I've tried -hero air, -hero lighting but nothing comes out
-Choosing heroes with commands are quite not friendly, some people just don't know how

ksStr said:
Yea I've gone through your map @@
and don't know why, only -hero fire works for me
-I've tried -hero air, -hero lighting but nothing comes out
Click to expand...

So..the hero pick system works fine,I do not know what be happening to you.Anyway, you must wait 15 seconds for the disappearance of the heros, only then can you give the command to choose.

ksStr said:
-Choosing heroes with commands are quite not friendly, some people just don't know how
Click to expand...

Well,was the only way I found to seem "alternative", by way of taverns, besides being very original, I would have to increase the size of the map like that would be bad for 7 players. 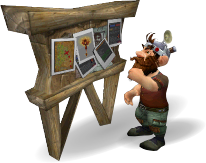 "Elemental Field" a Hero Arena map were you can choose different types of elemental heroes at your command and put them to the test to be the greatest elemental player in the game. this map was made by Vermelhin.

Gameplay-[5/5]
Note: Were I pronounce your game challenging or a waste of time.

Playability-[5/5]
Note: This part tells me if the game is rather fun and can be played again and again.

Terrain-[5/5]
Note: Were I tell your game's environmental display is either great or terrible.

Managing-[5/5]
Note: This is were I explain the output or outcome quality of the game.

Bug/s
Note: No score, just to tell your map has bugs on it or simply bug-free.

My complements for the Maker/s of the map's game.

Were I explain your map needs to get fix or make an improvement of your work.

Your Game was good, its fine to play with friends and all but the command is so confusing I mean instead of -hero air, you must tick -hero wind, It would be nice if you can load them in a tavern instead.

The game can be re-playable, but it turns out to be boring after playing it again and again, add more features in the game, its up to you to make one.

Terrain was horrible, to my observations, its too hard to hide and seek in the game because of those "Rock Chunks" that can be destroyed while the real doodad rock is too small for all of us to scatter around in blindspots and during night time, I suggest you add more doodads that can merge with the elemental type of concept and can be used for strategies and such.

The Management of the game was a downfall to my conclusions, some heroes looks or look-like it was on a beta-fix, while some of them made bugs or leaks (explanation in the "Bug/s" section), skills were too hard to understand and some of it was translated in another language (portugese?). I hope you can spot these mess up work of yours and because of that, start redoing it as soon as you see some mishaps of the map.

The Fire Elemental was bugged! The Skills description were missing and the volcano spell doesn't work and the Water Elemental, it takes 4-5 ticking before it can reveal itself in the game.

[Conditioned]
Hope you can do better than before, Goodluck!
happy map-making!

Icons 2 Maps 12
Yes, i really find Command Choosing original @@
While i used them in my maps too
and then i found out most of my friends don't get the idea how.. T^T

Models 2 Icons 1 Maps 3
Now,i think,no more bugs.
Tell me founded bugs,give me suggestions.
You must log in or register to reply here.