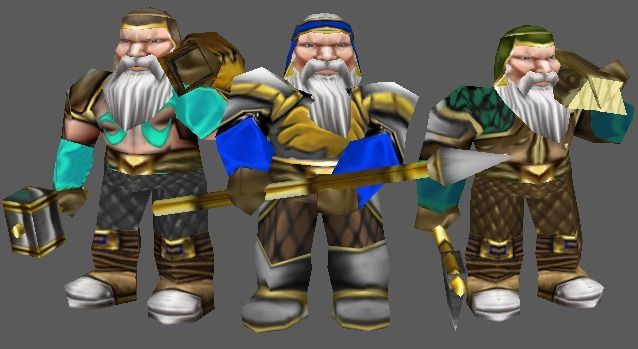 This bundle is marked as approved. It works and satisfies the submission rules.
View usage Statistics Legacy download
Reactions: Zodiac the barbarian, Barsbold, FeelMyRash and 5 others
Dwarven Workers, capable of switching roles at their Town Hall. One being a builder; and capable enough miner; the other being a woodsman, better equipped to harvest lumber.

This Dwarven labourer can also arm themselves for battle at their nearest Barracks, becoming a Guardsman.

Feel free to use and/or edit this model as much as you like, but remember to credit me.

EDIT:
Fixed an issue with the Lumberer.

Models 3 Icons 65 Packs 3 Skins 27 Templates 3
I'm loving it. During his walk animations you could make him lean a bit to each side, because it's a bit robot-ish (maybe it's just me..). His death animation is a lil' bit fast. Nice wraps btw.

Models 182 Icons 14 Packs 3 Skins 2 Maps 1 Spells 1
I left his animations the way they are, so they fit better with the default worker models. If its that big a problem, I'll go back and fix 'em all.

I left his animations the way they are, so they fit better with the default worker models. If its that big a problem, I'll go back and fix 'em all.
Click to expand...

Kinda seen that before

Skins 3
Interesting. Both idea and execution.

Models 11 Icons 1
All your dwarves are pretty amazing.
The only problem I see with this, although it isn't much of a problem, is that it has no lumber animations.
But because he's a dwarf I guess it sort of makes sense.
All in all it's very well done, the animations are pretty cool. Specially liked the Stand Work animations.
5/5

Models 182 Icons 14 Packs 3 Skins 2 Maps 1 Spells 1
For anyone interested, what I'd initially had in mind was that the Dwarven Labourer could go to either their local Town Hall, Lumbermill or Barracks to equip armor, a builder's hammer and gear, or some other gear meant for gathering lumber; and having the freedom to stay in that state until they're needed for other jobs.

Nice worker! I love it!

Maps 1
Nice work, its nice to see a worker with an actual axe to chop trees

This shows 3 dwarfs but when I open the Zip file there is only the 1 and it shows a bag of gold in game when he mines no wood when he chops
You must log in or register to reply here.