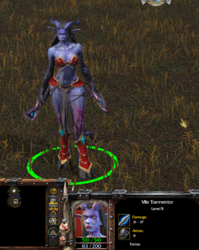 This is Dranai Female made on request of one of the Hive members.
Made on base of Vile Tormentor.
Team color added for cloth.
Eyes and glowing parts recolored to blue.
For some reason its a bit oiled, maybe some issue with texture layers, but as for me - it is not bad.