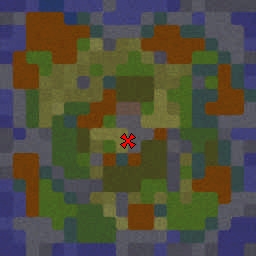 This bundle is marked as recommended. It works and satisfies the submission rules.
View usage Statistics Legacy download Why should I care?


Ever wanted to make a neato spell, but never had enough true grit to make a schweat test map to go along with it?

Maybe you thought to "borrow" some else's, but even that seemed like too damned much work.

In the end, you resigned to uploading a blank 64x64 grid of boring, and plum forgot to include an anti-death serum for your hero.

If this sounds like you, read on. If not, read on anyway. You just might come to change your mind.

Once upon a time, there was Tinki3. He made a Spell Test Map Template, and life was good. Delorean forward in time and make a pit stop in 2011. What was just fine and dandy in 2007 suddenly leaves us wanting.

A new age of WC3 map making calls for a new age of Demo Maps. One incorporating vJASS syntax, and the general reconfigurability and added efficiency imparted by using JASS natives.

Ergo, a revamped, fresh spin on the concept.
​
Template Includes:
*This is is no way indicative of and should not be misconstrued to imply a THN general consensus.


It's too small.
Maybe, but then again, getting from point A to point B just got a whole lot easier.

I noticed something in the map's custom script.
Leave it. Unless you pain for death!

Can I use this?
Yes, people have actually asked me before if they could use my publicly released resources.

Can I use this without credits???!?
I'd prefer you didn't, but then again, if you can just manage to remove that confounding player text...

How do I configure this?
If you have to ask, you're probably better off leaving well enough alone.

My hero won't die.
Cheating is as cheating does.

What if I have a suggestion or bug report?
I'm all ears. Literally, my ears are huge. Seriously though, the more comments the merrier.

This map sucks!
You're entitled to your opinion, just not in my thread.

Can I help?
Sure can!​
Updates

Thoughts? Concerns? Comments? Flames? Let me know how you really feel.... Does anyone actually think this is useful? Anything else you'd like to see included? Etc....

Maps 4 Tutorials 1
Its a tiny template but it looks good to me, and its triggers are useful too