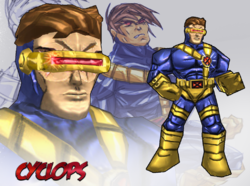 This Cyclops comes with state-of-the-art ACTION POSES! That's right folks, you need someone to fight the bad guys and look good while doing it? Look no further.

*Slaps roof of Cyclops* Matter of fact, this bad boy can hold over 9000 GHz of unpent sexual frustration and optic energy. I mean, you thought wolverine had problems? this guy didn't hesitate to get right back into the dating game after Jean died, with who else but a CLONE OF HER. And then, HE DITCHES his new clone wife and baby (Lil' Cable) when he finds out Jean was ressed. Ladies and gentleman... Cyclops.

Alright, so you're still reading. I applaud you. Lemme throw some details at you.

This hunk of X-Man comes with:

Here are some examples of what kind of spells you could create with him:


You have my permission to edit this model or use for your own purposes! Just give credits

The spells created above are for a map in progress, X-Men Legends developed by GetWulf@Europe on battle.net, and assisted by myself. It's a 7 player co-op rpg where you go on various missions as one of the X-Men. We're both diehard X-Men/Comic fans and if you're into that kinda thing as well, send me a message on discord @Jampacked1#3590 or come join our X-Men Legends discord Join the X-Men Legends Discord Server! and I'd be glad to play a game with you or let you know how it's coming along!
Contents
Reviews