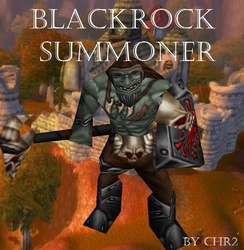 A while back, some Blackrock Orc skins were requested. This is the second, and probably last one I'm doing. The face wrapped kinda strangely, so I decided to focus on the portrait, which is why it looks like some strange kind of shark/man hybrid on the unit model. At the same time, the teeth used the borders of the shield for their texture, something I didn't notice 'till the shield was done. However, I kinda got stuck on the idea of the dark-ish iron teeth as a tribute to the Black Tooth Grin clan (which is an offshoot of the Blackrock clan).

As with the Blackrock grunt, I based this one on the Chaos version, however I reckon it probably works with the normal version of the warlock too.

Have fun, and give credits if you use it!