I'm a long-time CF fan and still like to play it today. But it gets a little old and has some flaws (stun totem & end-game lag, OP artillery & fire elementals, non-functional parameters).
I was trying to get the original or current map to improve some of these things, but that endeavor was unsuccessful.
I'm not saying I want to make a better map, but something you can choose to play instead once in a while, that feels similar, and has a smoother end-game (for old computers like mine .

I haven't put that much thought into it yet; I want to see some enthusiasm (or critisism) first and find out if there are alternatives to CF already, which I don't know of.

Some ideas I was considering:

*edit:
I guess I could start with 4 races, which each have similar base units with some tweaks.
Then you can sacrifice a certain number of units to one of 4 gods, probably by stepping into a circle with your worker. That 'charges' the divine power you get. After sacrifice, you can choose out of 4 boosts for your units. (Which are stronger if you sacrificed more.)
OR you can choose to give that power to the king of gods. If all players in a team do that, he will grant a special boost, depending on which gods gave him power.
This way you have a lot of different options to choose from and you will have new combinations/strategies in many games.
Plus you must decide if you want to keep your units or sacrifice (and when). And it doesn't get too crowded, if the boosts are worth it.
Last edited: Nov 20, 2021

Some quick feedback:
1. Keep the race differences from the start.
2. Corrupting modifiers could work, but maybe should come with a tradeoff.
3. Better to make this a special building.
4. indifferent
5. Pseudo-moba? Very hard to balance i'd say. Maybe allow temporary control of said hero.
6. Perhaps units could have lots of upgrades, making vertical progression a real option (like Footman->Captain->Commander->Champion->Myrmidon)
7. Sure

Tools 1 Maps 12
I decided that it is too much work, when there already is such a great map. Since gex gave the approval a while ago, I instead re-programmed CF in C# based on the original map, making some small changes and adding only the sacrifice feature. Currently in testing-phase. Expect the first version some time around christmas

Models 3 Maps 1
Maybe have an automatic trigger that kills all spawned units when they reach a certain amount to prevent the huge lag in endgame.

Tools 1 Maps 12
Me and kagearm had the idea that a player is forced to sacrifice using a random buff if he has too many units. (After a warning.) That way you aren't punished for having a large army.
During my tests I had only one game with that many units, and it still ran pretty fluently, even without this feature. Just when we took over some enemy units and 100+ nearby naga sirens summoned lobsters at once it became a little laggy xD 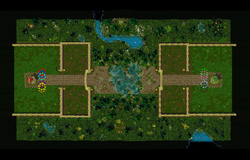 Castle Fight Corrupted - well, not that corrupted (yet). I started this project November 2021 mainly to fix the stasis totem lag, which all Castle Fight players know too well. Since I had to re-program the whole thing, some more or less noticable details have changed as well. The gameplay is...

www.hiveworkshop.com
You must log in or register to reply here.