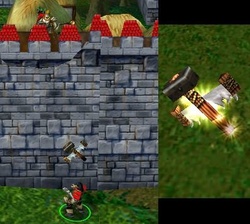 A very simple model, though I think it still could be usefull for someone ...

It's a 'build symbol' meant to be used as an overhead attachment. Can be used to highlight workers, symbolize that a building is under construction, etc.
The model has a birth, death and stand animation and only uses ingame textures.

Updates:
-Added an alternative version with particles and glow effect as portrait


Pls give credits, if you use it in your map.
You are allowed to modify it as long as you give credits.

Moderator
[img] [img] Misha [img] 30th Apr 2013 Moderator's Review: sure, looks cool, but i have a feel that it could use a lill tiny effect, maybe a particle or glow? coolio, approved
Read full review...
Reputation Statistics
Show Ignored Content