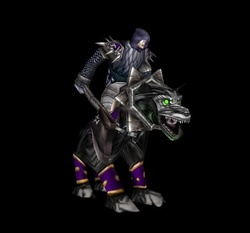 The undead notoriously lack in having an ordinary cavalry in Warcraft 3, so i decided once again to make a custom unit. What i wanted to avoid is making a unit from which several other variations already exist on the Hive. I know that there already exist some blood hound models on the Hive, but i couldn't find any so far that resembles mine very much. At first i had a few problems when making this model as i was unsure about which skins would be best, so my work came to a hold for a while. A few weeks later i continued the work, and after hundreds of "trial and error" results, i finally came to this one. It took me more than a month to make this model, as i had to create a skeleton for the rider and animate it manually in Magos (no joke, i CnPed the values from Thrall's bones and set the frame numbers accordingly). And even after most of the work was done, it still took me a few hours to give it the finishing polish. All in all, i have to admit that this was one of my most demanding and labor-intensive works.


About the model:
Many townfolks claim that there's no bigger menace to villages and even small cities than the Troll Boar Riders. Well, actually they're terribly mistaken! There's one kind of cavalry that tought even to boar riders the meaning of fear and demise: the undead Blood Hound Rider! Whilst both have developed a fondness for surprise attacks and pillaging, in any kind of confrontation the blood hound riders are always in advantage. The reasons are many:
-) the blood hounds can smell anything from huge distances, including invisible units and alert the riders in time
-) most creatures, incl. the "hoggers' " boars and also mammoths have learned to avoid blood hounds, hence they flee in fear when they hear their howl
-) blood hounds are as heavy as boars, but more agile and faster moving
-) boars are good runners too, but in endurance they can't compete with the blood hounds
-) the blood hounds' bites infest their targets with several diseases
-) the blood hounds are naturally living in packs, hence they can coordinate a perfect attack by themselves without needing guidance from the riders
In addition to every aforementioned fact, the blood hound riders are also more merciless, brutally and way more evil than any other cavalry. They don't only raid for enriching themselves, but also for entertaining their mounts with prey-villagers. They often even take captives and send them away, just for hunting them later down again.

Feel free to use this ressource in any imaginable way you want! Have fun with it!

P.S. I'm planning to make more variations of Blood Hound Riders soon. They all will have the same mount and armor, but different weapons, helmets and faces.

EDIT 1:
-) body proportions fixed, now he doesn't have ape-arms (too long arms)
-) vertex assignment problems on chest fixed (my thx to -Grendel for pointing that out)
-) applied a few changes to the mount's head, so that it doesn't clip through the collar again during the Stand - 2 and Stand - 3 anims
-) re-edited the Attack - 2 anim (performs more like an axe-swing now)
-) replaced the hair with a hood, as they brought mostly negative criticism
-) also applied a finishing polish to the riding crop

I hope it performs bette now!

EDIT 2:
-) fixed that odd snake-like movement of the mid-part from the chest
-) also added one more chain, it starts from the left side of the big torso chain and goes to the left hand of the rider. I added for not having it loook like the hand only floats above the model.

Should be much better now! If you downloaded the old version, make sure to replace it with this one, it performs better. !

EDIT 3:
-) merged the model with the wolfrider's skeleton. It uses his anims now, with a slight modification
-) Attack -1 now lets the mount bite

EDIT 4:
-) further fixed a few vertex-to-bone-assignment issues, a few unnatural movements and all remaining skinning issues (the rider's right side of the torso had two minor flaws over and beneath the shoulder joint)
-) Attack 1 has been changed to its default, the rider attacks with one hand
-) ingame screenie also added (functions properly ingames)

-) BONUS: added 4 more "custom" animations:
All anims are CnP's from the frames of the model's ingame anims. I just sometimes edited the movement of single bones to vary them a bit, and sometimes i combined frames from many anims to make a new one.

This was done in MDLVIS.

Moderator
23:59, 6th Aug 2014 MiniMage: I've been trying to figure out what looks off with this model. The wolf head along with the collar needs to be scaled down about 10%. The wolf head is also kinda too square, A wolf head generally ends in a point. A...
Read full review...
Reputation Statistics
Page 2 of 3
Show Ignored Content
Page 2 of 3