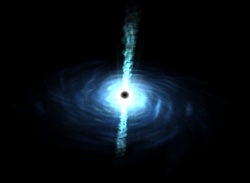 This was a quick model i threw together after noticing how the whirlwind texture from the blademaster kinda looks like a vortex.

It is supposed to resemble a black hole, the way they actually look. Even though a black hole in itself cannot be observed, the immense gravity causes attracted matter (usually gas) to flock in a disc-like shape around the black hole, forming a so called Accretion disc. In the area nearest the center, magnetic forces causes some of the gas to shoot out in jets perpendicular to the disc - sometimes these jets can become thousands of lightyears long!!

I based it off these references: Ref1 Ref2

This model uses only ingame textures, and should be useful for space maps. Note that the tail particles of the jet cannot be seen in magos, only ingame.

UPDATE: Made the disc more luminent/less translucent, modified the jets, and added a black dot to its centre.

UPDATE2: Added a glow layer to the disc.