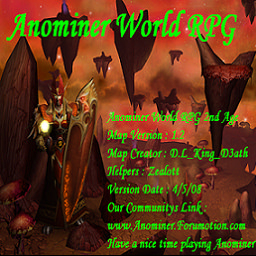 This bundle is marked as useful / simple. Simplicity is bliss, low effort and/or may contain minor bugs.
View usage Statistics
What i added in last version :

Changes Paladin of Anominer, to Druid of Anominer (Spells : Healing Circle/Nature Aura/Bear call/Mother Earth Protection)
Adds some new spells to Ranger of Anominer (Stun shot/Slow aura and changes a bit the Shadow Shot)
Adds event elite place (ONLY RED & YELLOW can use the command : -event to move their team into the event place)
Added 4 Variables to fix the quest system
Reduces texts at the start to reduce the chaotic spam
Fixes some glitches
Added ESC command (still only for red)
Delete some unused triggers/variables
Changes the time for day/night system
Balance the stats of raids (reduces HP by 25% / and Damage by : 33%)
Increases HP per strength by 2
Increases Damage By primary attribute by 16%
Added 1 upgrade for Sharp Sword(Zombie Kings Sword)

Have a nice time playing anominer.

Created And Modified By : D.L_King_D3ath

Map Info View Resources In Use Preview Triggers
Reviews
20:00, 16th Mar 2009 by bounty hunter2: Hello kind sir, this map is being moderated: I must sadly inform you that it didn't pass and is too low quality for the todays standards of the site. Here are the reasons: * Horrible terrain (Study this...
Read full review...

20:00, 16th Mar 2009 by bounty hunter2:
Hello kind sir, this map is being moderated:
I must sadly inform you that it didn't pass and is too low quality for the todays standards of the site. Here are the reasons:

* Horrible terrain (Study this art more, you need improvements.)
* Bad Object Editor Work (Heroes and abilities are basically just the warcraft changed ones, bad tooltips that don't explain what an ability does.)
* Quests (You don't really know what to do sometimes, get confusing fast.)
* Originality (Yet I don't see what differs this from any other RPG.)

You spent a lot doing this, however it requires a lot of work. A lot more. Use the Map Development Forum to gather more feedback, for now Rejected.

you can visit our site at : www.anominer.forumotion.com

If you find some bugs or anything else, write them here, or at our site, and i'll try to fix it.

Thanx for downloading my map.

Maps 5
whats the difference between this and the first age?

Well... nothing special... it is just for the anominer's history(not anything to do with the in-game story(just yet)) soon history and in-game futures will be one(if something changes in story, map will have the same changes)

1st era is the era of humans& elfs(ancient era)
2nd era is the age of orcs(they start to be stronger and stronger after their last defeat (in 1st era against humans))
and 3rd era will be the era of alliances(humans/orcs/and the last living elfs) againts the supreme demons( they come in the anominer kingdom from the abyss of hell...)

Maps 1
From what I read, I expected this to be good, pretty epic.

It is not. It's the worst grind I've ever seen on an rpg for the early game. It requires a full house or someone ultra buff to carry you.

I tried to play with my friend and even the simplistic monsters were destroying us. The first 2 quests are unclear, and so you don't have much direction on WHERE you should be creeping the easy mobs, and many mobs do not have identifications on where you should go to battle.

Getting gold is only earned by quests, yet you lose gold when you die. This is...very annoying. I was getting killed nonstop, etc.

I looked at their forums, extremely empty, not much on it. Showed some commands for difficulty, didn't seem like it worked since I still got annihilated by weak mobs.

The battlegrounds are extremely annoying as well. You feel so weak and you even level up extremely slowly there. It's like the whole game goes at a crawling pace, as every mob gives such low xp values, and then enemies are overwhelmingly strong. The worst part about the battlegrounds is by far the area of effect spells. I got completely annihilated by them about 10 times in my first game, just by a simple shockwave that instantly killed my hero. In addition, my hero almost got killed by 1 hit of any mob in the battlegrounds. Seems like a late game function, sure, I'll roll with that IF you give me easy quests to begin with that don't require an entire full house team in order to kill 3 mobs...

Yeah, horrible RPG for not considering these factors, it's really meant for a full house team, which is entirely too difficult in a public game.

Maps 1
Psyco,
yes i know, its not easy map, for that needs at least 4 players, its not so hard to find 4 players i think....

now,for the quests and the gold, its the gameplay of the map on the way of this type, in last version im going to increase the start of heroes by 20%.the gold penalty for duying is 3 gold, i dont thing is extremly high...

also for battlegrounds,im going to add some more XP from the mobs, my friend didint make so good work; ^^ so im going to change it a little.

I suggest you, for first time to follow this compination of heroes :
for humans
Druid-Dwarf of Anominer-Paladin-Jaina(or malfurion)
for orcs
Necromancer-Warlock-Gotharg-Illidan(or warden)
You must log in or register to reply here.