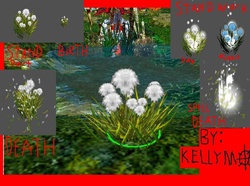 my 5th model ever. this was a request from CMarket, I was never even planning to make a white variation, I felt the color was perhaps too plain for war craft 3s bright colors, but looking back on it I like this variation.

there is no in game texture in side the entire mpq of war craft that has a white flower (Except one I did not like) hence a small custom texture for the flowers head, thats why this model has 3 custom textures unlike all other flowers, but the new texture here is only used for this variation and it is small.

this flower Ward has 5 animations:

use the scale of 0.9 to 1.2 for particles to match other wise they dont fit properly.

make sure you use 1.438 death seconds so that lights emitted dont abruptly end, trust me it looks weird.

this flowers attachment points are similar to that of the other plants and wards iv made, it has origin, chest, head, and overhead that are set in the middle, and hand left, hand right, foot left, and foot right placed in a box around it on its sides front and back.

give credits to me and what not, il be uploading more soon once more have been approved, dont like having 5 pending models at once makes me feel like a spammer

thanks to everybody who give me constructive criticism and bother to take the time to tell me what they like and what they dont.

--update 3-- ok, changed double sided material layers into single sided ones because they are bill boarded and are always facing you any ways so they dont need a back side you never ever see, linearized animations, modified all the helpers into bones, and fixed something that was broken.

---update 4--- When I linearized the animations using mdlvis editor, the particle emitters lost half there strength somehow, so I just fixed that too here for this flower