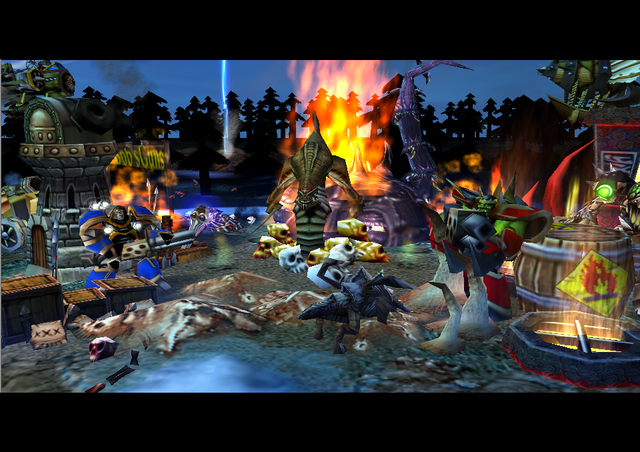 A STARCRAFT-LIKE MAP (TITLE IN DEVELOPMENT)


tl;dr It's Warcraft 3 in space. Map is in progress, stay tuned!


Hey again guys, after my previuos map [ [Altered Melee] - Altered Melee with non-playable campaign races of Wc3 ] I want to show you what I am currently working on these days.
The concept is about a 3 players FFA original RTS starcraft-like map with massive armies.
Okay, let me explain it first :y
I meant I want to create a straight FFA multiplayer map that could be played also with Ai computer players, where there are 3 factions to choose from (Terrans, Zergs, Orcs in Space)
I took the idea of 3 factions ffa from pc/ps4 game PlanetSide 2 while obviously the races are widely inspired from Starcraft's races, but with Orcs instead of Protoss.
The gameplay will be sightly different from the basic melee wc3 game, with some features inspired from AoE2, PlanetSide 2 and Starcraft 2.
There will be a hero system more like Co-op Commanders from starcraft 2 rather than wc3 heroes.
The tech-tree system is also different and it is like AoE's ages.
There aren't creeps but there will be a trade system to get resources more quickly.
Armies will be larger than wc3 ones for large scale battles.
All models, icons and animations are from world editor only.

Currently I'm already working on making the races (adding units/spells/buildings and defining hero/tech/economy systems per race) and balancing them in the meanwhile. Then I will make the terrain and AIs.
The map is work in progress and many things could change in the future, actually right now I am not sure the map will be fully completed and ready to release at some day.
In the next days I will update this thread with more previews, screenshots, infos and ideas beside map progress status.
That's all I have for you now, I hope some of you guys are interested bye!

I am going to show you each race's units with a summary of their abilities, role and main stats.
Like a guide or something to start getting to know my map progress.

The Space Orcs are a Covenant of Kalimdor Chaos Orcs and Goblins with Burning Legion's engines who embraced both Goblin technology and Chaos philosophy. They travel through Dimensional Portals to conquer new planets.
TIER 1
+

DIMENSIONAL PORTAL. It is the main structure of Space Orcs. It allows Mech Goblins to get through it and establish a bridgehead on a new planet before the Space Orcs' army invasion.
It also makes you choose your Commander and revives him when he dies, can recall a Flagship and researchs upgrades to tier 2 and tier 3.
- Units created:

Undying Army. Revives the corpse of nearby dying Orcs and let them to continue the battle.
__________

Ray of Disruption. Dispells summoned units and wards bouncing up to 8 times.
__________

Illusion. Creates an unoffensive duplicate of a selected friendly unit.
+

ZEALOT. Strong melee soldier that uses a mana shield to absorbe dmg. Can learn Bloodlust, carry and use items. Abilities:

Siphon Mana. Drains mana from an enemy unit or gives mana to a friendly unit.
--------

CHAOS SPACE ORC. Deadly soldier armed with a flamethrower. Can sacrifice himself to ascend to Archon. Abilities:

Destiny. The Chaos Space Orc loses hp until he dies, then a powerful Archon it is summoned from his ashes for a limited time.
--------

INFERNAL JUGGERNAUT. Tactical mech unit that can use Earthquakes and Infernal Stones to zone out his enemies on the battlefield. Summons a Battle Golem as living artillery. Abilities:

Earthquake. Shakes the earth with a magnetic field in the targeted location to slow enemies.
__________

Infernal Stone. Summons a Battle Golem falling from the sky who deals dmg and stuns enemies in the crash location.
+

DAGGER OF MANA STEALING. Steals mana from an enemy and gives it to the user.
--------

LAND MINE. Places an explosive mine that deals heavy dmg to nearby enemies.
+

ORC BURROW. Primary defense structure, it requires 1 up to 4 Zealots inside the building to attack. It attacks both air and ground units.

GOBLIN WORKSHOP. Advanced military structure that allows to produce both heavy mech units and aircrafts once the bridgehead has been successfully established.
- Units created:

IRON GOLEM. Heavy armored unit driven by a goblin, can slam the ground around. Can learn Traslation to teleport himself at a short distance.
--------

SANCTUARY. Allows to create Shamans and Archons at the Demon Gate and researches upgrades for Tier 2 units.
+

POWER GENERATOR. It provides additional supplies to sustain a growing army. Can restore mana to both organic and mechanical units.
+

GOBLIN SHIPYARD. Allows to create aircrafts at the Goblin Workshop and researches upgrades for air units. If you chose Unic Commander BUILDER it allows you to create powerful Orc Juggernatus.

Terran is the successor of Lordaeron leftovers. Hardened by Scourge scars, it improved Dwarfs' war engine and it created a militarized society willing to colonize a new world. Rumors say Terran has experimented on Scourge to potentiate itself...

The Zergs are a galactic insectoid parasite that swarms among stars to infect new species. With no individual personalities, all Zergs obey to an unic Overmind and when they first came on Azeroth someone has take control over the hive.
Last edited: Jul 28, 2017
You must log in or register to reply here.