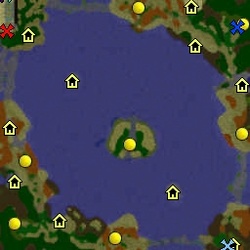 Fight as 1 of 9 distinct factions and wage war, one on one over two continents. Purchase super items for your heroes, play as new factions, utilize aerial transportation, sail the seas and combat your opponent any way you want.

How to play: When game starts, move your wisp to the Blue Beacons to learn more about your race, move to the Red beacons to start.

New Factions! Blood Elves, Naga, Draenei, Satyrs, and the Burning Legion.
(Belfs, Draenei and Burning Legion were made from scratch!)

Each new race has its own strengths and weaknesses, exploit them to destroy them!

Draenei
Balanced: The Draenei are easy play as, since most of their units are cheap and mass producible. The n00b faction.

BUGS:
* Night Elf Archdruid cannot morph properly, use at risk
If anyone finds any other bugs, please report it to me with a Private Message.
Title it Jungle Wars Bugs

The old default races have been revamped or can now train new units and heroes.

Thanks for making ultra sick models, icons and music!

WARNING: This is a HUGE map file
This map took me 4 months to make haha
I've tested the map so all the imported models, units, abilities, and icons are guaranteed to work. Except for the Archdruid I mentioned.

Announcements
Crimson Ice is almost coming out in two weeks.
It shares all the features and units as Jungle Wars, including one new faction:
Azure Dragonflight.
If you thought this map was cool, wait for Crimson Ice. And then, after that Unfair Advantage will be released afterwards lol, but that won't be anytime soon.