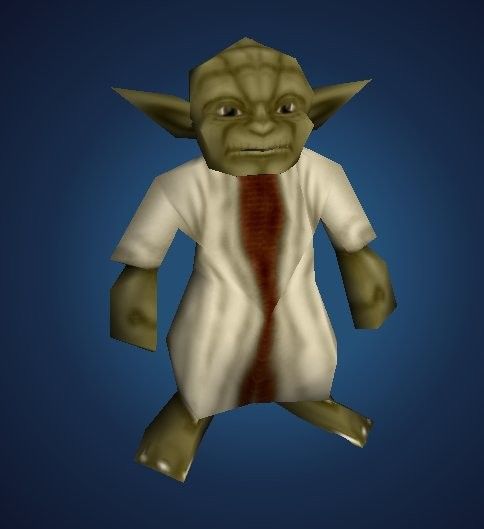 This bundle is marked as approved. It works and satisfies the submission rules.
View usage Statistics
Yoda, based on the Villager kid model.

Made by Olof Moleman

Give credit if you use this in your map

Please do not distribute or modify this resource without permission.

Models 13
The Orc Child model uses a few Villager animations, which were the ones I transfered over. So no stabbing for Mecheon <_< >_>

Models 1 Maps 1
Good things:
•It has been requested and needed a loooong time now.
•It takes a very short memory so no change in DL.
•It has a powerfull nice skin.
•It has a portrait.
•It has attack animations (base file is villagerkid)
Bad things:
•Though so are the animations from other models.
•He don't fit in that many maps. (Yet...)
•He could have been shaded a bit more in skin.

Own words about it: You have done it again. :?
My favorite model maker (Except in doodads) has made another fantastic model!
But eh... what you mean with "First model" you have made more...

Man u r god!! great model...if u colud pls make more of sw models that would be grat!!

Tools 4 Maps 11 Tutorials 14
This model gonna be perfect if it has one little thing: Can he use a Lightsaber :roll: ?

Models 114 Icons 106 Skins 14 Maps 1 Tutorials 2
Answer to King of Tinnesa: this is my first model, all the other models I uploaded were made by Mecheon, I made the skins and Mecheon made the models, then I uploaded them. We worked together.

Answer to Barbárvore: well you need to download a lightrsaber attachment, and then attach it to Yoda's hand, but I don't know if the anim are useable for lightsaber attacks.

Models 2
Not too shabby, if your interested in continuing with Star Wars, please be so kind as to contact me. Ive completed around 20-25 Star Wars models already, ide hate to see a duplicate made for no reason.

Maps 4
Not that bad, I wish that he'd had better animations. Yoda isn't one to fight with fists. He uses the force. The villager animations have to part in him really, but Tim. suggested that you'd add a different StandReady animation. I think it should be him hovering in a meditation type stance, he slowly hovers up, and when he reaches peak he has the hover type movement (Like a U.F.O.?) And when he is ordered to move it breaks his concentration or w/e causing him to fall. Since he is Yoda he should break his fall. Yoda isn't much of a fighter.. He relies on The Force, and almost The Force alone.

who is gonnna make a star wars map?

Models 8 Icons 1
I like it, though his head doesn't look too much like Yoda (or maybe it looks like a younger Yoda or another member of his species).
Tim, have you made a stardestroyer? Cause I have made one for Med Mapguy. He won't make any Warcraft III maps in about a month (he's taken a short break), but he might need your models, he planned to do some StarWars cinematic.

Make darth Vader with cool animations like useing the force to strangle people and stuff FIRST MODEL WOW! 6/5....may the force be with you lol

Maps 4
Tim. probably won't get around to posting back, but since I know everything I'll tell ya... About 80% of his Space Ship models are included in The Battle For Hoth map. All of the models will be submitted once he finishes all icons and Animations to look right for WC3. He has a few "foot units" Such as the Scout trooper, AT-ST, Pod-Racers (in his new map), and many more that are being used into the Star Wars FPS, such as Gun attachments and Models in the works. So just PMing him would be good, then he can set aside some of his other things to finish the ones needed... But try out The Battle For Hoth; and you can see some of the ships that are in there, as for the completion of the models, is said to be on the release of Battle For Hoth GOLD. Which will have all animations and a few more ships and ship changes. Again on to topic.
When you make the Darth Maul, a good animation (If you haven't already thought of it) would be to make him always in the fighting stance... Like FF stances, kinda moving, kinda not. Anyway. I think that would be useful, as well as a jump back onto his feet. Like in the movies and to give him a natural affect.
-Joey.

Models 2
Thanks Joe for representing me.

Hes absolutely right. Also, I have made a Star Destroyer...However the skin is, shall we say, lacking. It could use some work. However if yours is far better than theres no point in me continuing with mine. Perhaps you could E-mail me the model, or just PM me some screenshots.

Also yes thats no problem, he may use my models if he wishes, however I would like to complete thier animations first, if he doesnt mind.

(I will be PMing you a copy of this.)

Models 8
[GOOD]
Awarded gookywooky's ownage award.
I am a star wars fan and i am always annoyed when yoda gets represented by the peon model.
Congratulations, olofmoleman.

Icons 1 Maps 7
I watn to have this model in my map but I can't. I import model, change path, restart world edit and try using him on a unit. But when I test the map only the shadow appears! How can I fix this? PLZZ HELP ME!

what are the paths???

man, im loving this whole Jedi-Set thingy. olofmoleman, keep up the good work, i need lots and lots of good looking jedis for a new map :lol: . BTW, do you think you could make a destroyer droid and a battle droid? That would be appreciated. Keep up the good work! GJ!

BTW: Can u pm me when u make more jedi models, u get heaps of credit when i make the map!

awesome model. there is an irritating occurance however, whenever i order the unit with this model to attack, the bones decay skin appears on the ground behind yoda. it dissapears again as soon as i order the unit to move or any other order - it only happens when it is ordered to attack. i was wondering whether this is a problem with the model, with the unit i assigned the model to or whether i need to import the gutz skin or something??

Wait, I thought yoda was the one in black. with the black cape and black robes, and he had a red face. and horns. and that two sided life saver. whats wrong with you? dont you know who yoda is?
0/5
Dont Fabricate Agranized Abominable Applesauce

Models 1 Maps 2
Flaming Pongo,did you even watch SW?Not?That's what i though.You dope that's Yoda,and something's wrong with your brain. 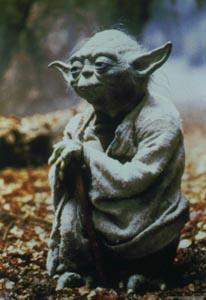 Can you make a model with Darth Maul and Yoda with Lightsabers please :?: 8) 8)

Can you make a model with Darth Maul and Yoda with Lightsabers please
Click to expand...

Maps 3
Very nice just make more JEDI please!! Im glad you or somone else made mace windu and kiadimundi but they arent enough we need like ploo koon and all those other ones!! Im making a starwars aos then kotor make more units and your sure to be listed in my credits of map IN BIG LETTERS!

Maps 3
OK. Nice model, but there are some glitches with attack animations ( a little death animation appear each time you strike ) and with the spell animation ( he keeps on jumping )

Can anybody fix these majors ploblems?

It is a cool model by the way.

Slowly working on a star wars map and would like to have this one. 8)

Models 114 Icons 106 Skins 14 Maps 1 Tutorials 2
I'm probalby going to make a better Yoda some day, and then get an animator to make awesome anims for it, like meditation and stuff.

Maps 3
Good to knoe Olofmoleman! I am presently doing a starwars map and I am using alot of models from this site including your stuff. I will still be using Yoda, and will update my map when I get new models or better ones. Of course I will give you model credits. This is great because I am actually able to do a w3 map that has a starwars feelings thanks to all modelers. I think it is going to be a pretty nice litlle game map. It has some aos elements and capture the flag, but I am not so good with multiboard and I still have it to figure out :roll:

Keep the good work, and I tink you are also working on another Starwars map?

Maps 2
GENIOUS! Just what I need ^^ My name IS JedimasterYoda at WC3, so I suppose that tells everything if I'm making a map ^^

i've gotten the yoda model to work in my map, but there's one weird thing, whenever he attacks his corpse is lying behind him. how do i get rid of that?

Icons 2 Maps 1
lol imagine if some1 accidently imported this into his village map and all the little kids turn out to be yodas!!

Skins 1
Not ready you are. Good work this is.. (Yoda talk ^_^) rating 4/5 Model I give this. Excellent! I wonder what the sound would sound like.

I like Yoda and you are the ONLY one that has made a Yoda model! Noicey Sploicey! I admire you and I suggest you make a lot more Models. -Bobby_Joe

Well very good model but I can´t use it,it has a corpse that creates upon attack
and stand ready animation

Maps 6 Spells 1
i dont know what is wrong

*poke* Put a lightsaber in his hand for me

"please"
You must log in or register to reply here.

i need yodas lightsaber for my map