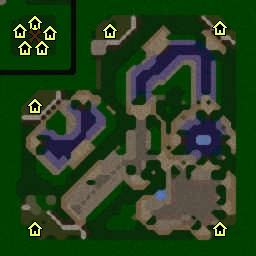 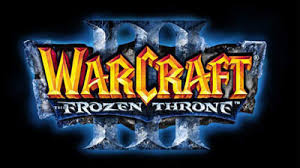 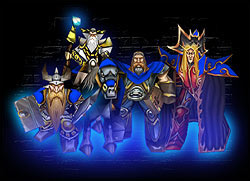 The noble warriors of humanity employ both a strong military and powerful magics in the defense of their shining kingdoms. Both knights and wizards fight side by side on the field of battle against those who would threaten the sanctity and peace of the Alliance. Although the Alliance has all but fallen apart, the valiant citizens of Azeroth and Lordaeron have once again taken up arms against the enemies of humanity.
Orcs 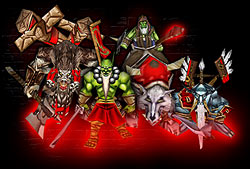 The Orcs, who once cultivated a quiet Shamanistic society upon the world of Draenor, were corrupted by the chaos magics of the Burning Legion and formed into a voracious, unstoppable Horde. Lured to the world of Azeroth through a dimensional gateway, the Horde was manipulated into waging war against the human nations of Azeroth and Lordaeron. Hoping that the Horde would conquer the mortal armies of Azeroth, the Burning Legion made ready for its final invasion of the unsuspecting world.
Night Elves 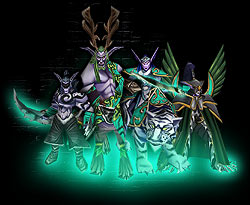 The reclusive Night Elves were the first race to awaken in the World of Warcraft. These shadowy, immortal beings were the first to study magic and let it loose throughout the world nearly ten thousand years before Warcraft I. The Night Elves' reckless use of magic drew the Burning Legion into the world and led to a catastrophic war between the two titanic races. The Night Elves barely managed to banish the Legion from the world, but their wondrous homeland was shattered and drowned by the sea. Ever since, the Night Elves refused to use magic for fear that the dreaded Legion would return. The Night Elves closed themselves off from the rest of the world and remained hidden atop their holy mountain of Hyjal for many thousands of years. As a race, Night Elves are typically honorable and just, but they are very distrusting of the 'lesser races' of the world. They are nocturnal by nature and their shadowy powers often elicit the same distrust that they have for their mortal neighbors.
Undead 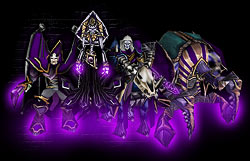 The horrifying Undead army, called the Scourge, consists of thousands of walking corpses, disembodied spirits, damned mortal men and insidious extra-dimensional entities. The Scourge was created by the Burning Legion for the sole purpose of sowing terror across the world in anticipation of the Legion's inevitable invasion. The Undead are ruled by Ner'zhul, the Lich King, who lords over the icy realm of Northrend from his frozen throne. Ner'zhul commands the terrible plague of undeath, which he sends ever southward into the human lands. As the plague encroaches on the southlands, more and more humans fall prey to Ner'zhul's mental control and life-draining sickness every day. In this way, Ner'zhul has swelled the ranks of the already considerable Scourge. The Undead employ necromantic magics and the elemental powers of the cold north against their enemies

Informations
Select from 24 Original Warcraft Heroes to Join an Epic Arena!
To Win:
Kills Must Have to Reach 10 x Number Players in the Game.

*Priestess of the Moon

*Keeper of the Grove 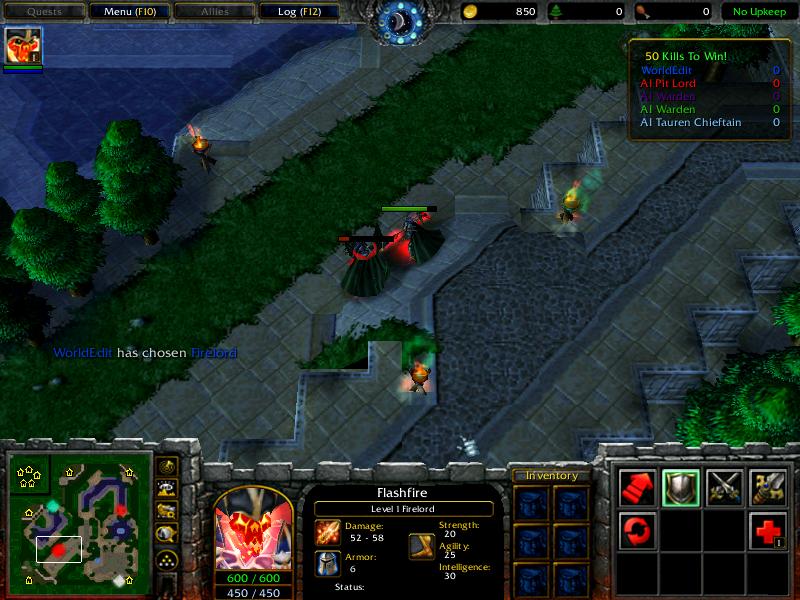 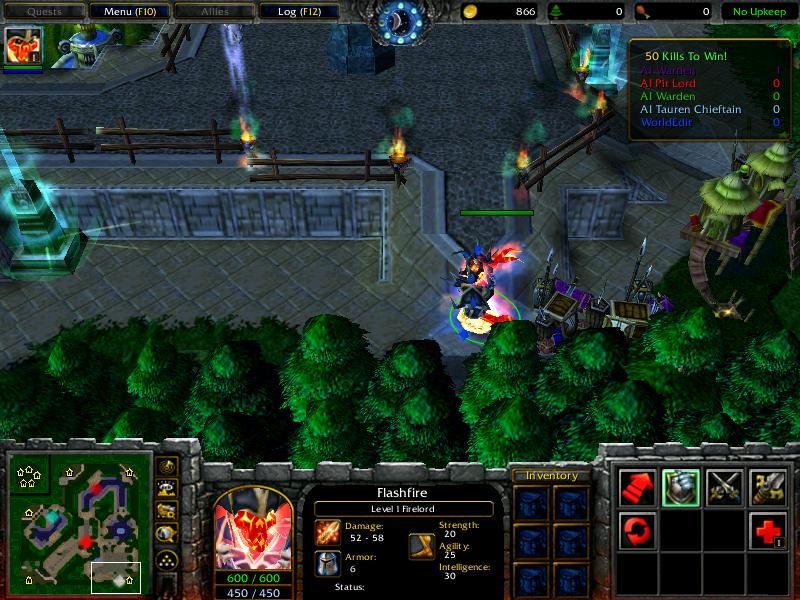 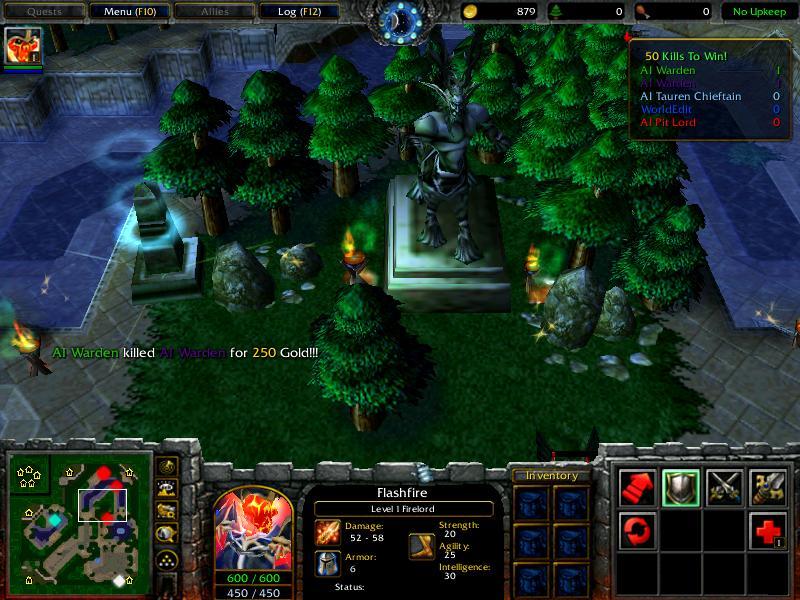 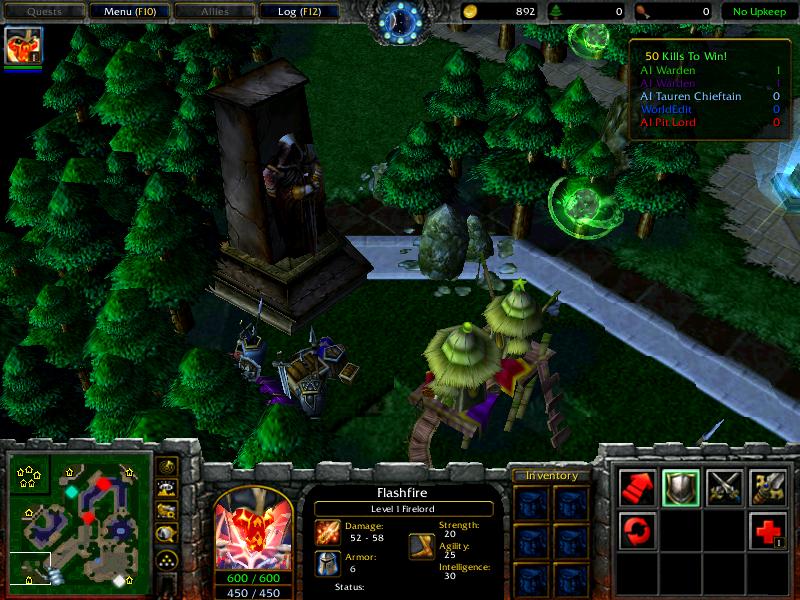 Models 4 Maps 3 Spells 6
I've really enjoyed this game but the bad thing that the spells, the heroes and the items are from the game not you created them.

Tools 1 Maps 4 Spells 33 JASS 1 Tutorials 4
sorry for that thats why i made the title as WC3 cause im using original heroes
in fact,i made this also as a template

Storm_hih said:
I've really enjoyed this game but the bad thing that the spells, the heroes and the items are from the game not you created them.
Click to expand...

actually,i made this half template/half game
also thats the reason why i made the title WC3

NOTE:
this are the original links:
Tauren Chieftain
Tinker
Sorry for the mistake

Icons 4 Skins 2 Maps 6
You should advertise this as a TEMPLATE map instead. More people would download this map for that purpose rather than play it.......

Don't wanna be MEAN or anything, but only having the original 24 heroes kinda discourage people from playing it since there isn't any custom abilities.

Models 77 Icons 25 Packs 1 Skins 1 Tools 1 Maps 43 Spells 7 Tutorials 7
You really have to develop this further more. This includes panning the camera after you buy a hero and after the hero revival. You used default heroes too much. Have some custom abilities.

Tutorials 1
WC3 Hero Arena is a simple hero arena game. Players take control of one of the original 24 default game heroes and battle it out. First person to an allotted number of kills wins.

The bugs and problems with this map are numerous. First of all, Taverns are under the control of player 1 (AI). As such, only players on Force 1 can pick their hero, as they have shared vision with Player 1. Forces 2-4 cannot pick their hero. This in of itself should be enough to declare the map unplayable.

However, there are other prevalent problems. All heroes have their standard abilities with no customization. Due to the fact this game is a hero arena, certain abilities, such as the Paladin’s area of effect revival, are totally useless. An item “recipe” system appears to have a framework of some sort implemented. However, a lot of the items that were “created” had no tooltips (Boots of Quel’thas, Frostguard Etc.). Therefore, their benefits were unknown. I also encountered a problem with the spawn system. An AI Dark Ranger respawned behind some “barricades” near a shop towards the left-hand side of the map. Due to the fact that the Ranger was the only Ranged character on the board, she could hit people from behind the barricades without being touch. If a player character spawned back there, they would be useless for the entire game or until some range character came and sniped him/her off

I am going to recommend that this map is rejected until significant changes are made and problems such as the Force vision are fixed.