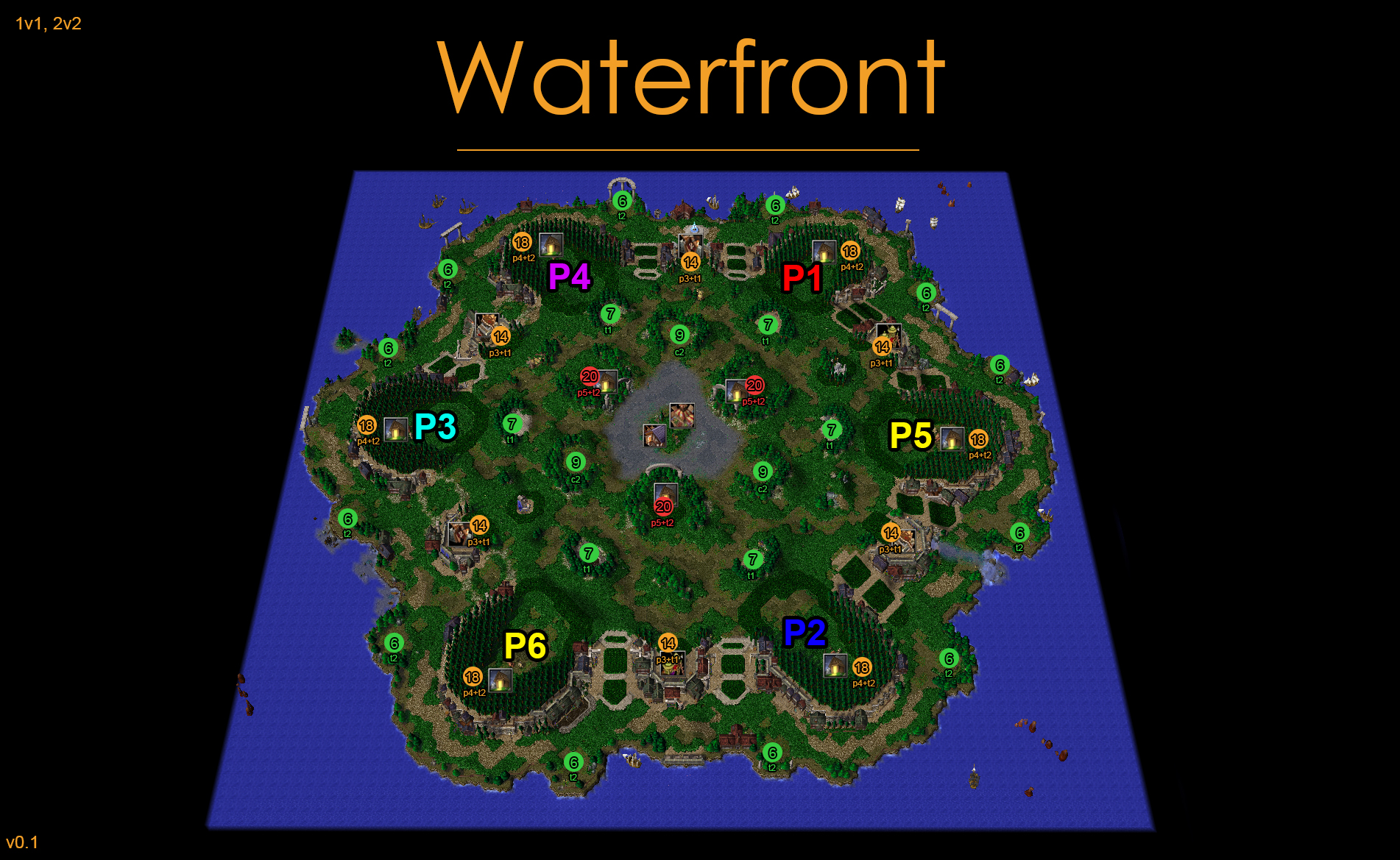 Description:
An island nation governed by six mighty lords, each one ruling a corner of the land. The land was peaceful for 100 years until the gold man ran dry. Causing them to do battle of the last vestige of gold.

Dev. Comment:
This map has random spawns which will cause every game to be different. There's a marketplace in the middle that's unprotected, however it won't spawn anything until you get your first drops. It's been placed there to give players a reason to travel through the center, otherwise the center would be barren of player activity. It shouldn't cause any balance issues since creeping will be rather slow here and the highest item that can be sold is a level 4. There's a ring on the outside that players may use to approach go around bases creeps serving as snackbites along the way so time isn't completely wasted.

-Added critters
-Replaced two side shops in favor of a lab (Adds more RNG i suppose).
-Changed center gold mines to level 20 (red). (Throwaway expos shouldn't be a thing.)
-There was an overabundance of charged level 2, that's fixed.
-Changed outskirt camps to level 6 (from 7) with a powerup 2 drop (Mobility heroes will find this useful).

mafe
Another good map. In reference to your most recent 0.3 version, I have the following notes: 1. Interesting idea with the market/taver center. I dont see any obvious downside. 2. The other rim probably wont see much action. The creeps are not rewaring...
Read full review...

Maps 12
It's good to see a new map from you, always a treat. Upon opening the map I immediately thought it's made for FFA (just by the general layout). It wouldn't probably be very playable in a 4-way or the very rare 6-way with the ammount of gold and xp on this map. But this map isn't made for FFA, you make it clear in the desc that it's meant to be played as 1v1 and 2v2.

I'm rather unsure about certain aspects, you haven't specified ally/enemy priorities so there's the possibility of a close spawn much like on TR which could cause problems for 1v1. Furthermore the placement of the mid GMs could create an advantage for one team in 2v2 if both teams spawn opposite to each other. The outer rim is an interesting idea, feels like a lot of empty place in the parts behind the bases but it could be overburdening if you added more stuff there. The unguarded market isn't any new thing under the sun, we've seen it work on Meerel's Black Market, except here it shares it's position with the tavern. Also, is there a reason behind not having lvl2 perm on the map? Like some marketplace machinations or smth?

In conclusion, the map seems to me to be mostly suited for 2v2 but some of the aspects of the map might create imbalances in this mode.

Don't forget to add critters. This sentence should by now become my signature
And care for wisp spots.

No reason for not having lvl 2 drops, i just didn't find a camp for it.
I'm a big fan of charged lvl 2 so i put that there instead.

Well the map is sort of random, so i don't expect complete balance.

I'll tweak it with feedback in mind (from reddit too).

Icons 13 Skins 2 Maps 20 Tutorials 1
Does this look the same to you in the updated editor?
I'm wondering if there's also enemy priority in versions above 1.31.1
@Knecht

I tested it like this and still got close spawns, so i'm not sure what i'm doing wrong.

Maps 12
Nah, with reforged it should look like this, idk if they added it in 1.32 since it's not in your version.

Maps 12
Sure, np. Just send me the map again whenever you make a newer version. Here's one with close spawns turned off. Idk if you can play the map on your patch thouch, if that bothers you.

Icons 13 Skins 2 Maps 20 Tutorials 1
Thanks you.
I'll notify if i need anything, though i'm good for now.
You can't open newer maps with older editors.
Not that it's a big deal, i don't really play WC3 anymore and i intend to continue modding.

Maps 6
WGL's decision to swap TM for TR shows that there is a deep need for a macro- and scouting-heavy map in the pool. Though, we as mapping community should really be able to deliver something significantly more balanced than TM (non-existent earlygame creeping; unsymmetric spawns; island expos) and TR (creeps attacking you on all paths; boring neutral buildings).
With the new possibility of enforcing spawns, our approach should probably be to create a balanced 4 (or even 6) player map with symmetric spawns rather than trying to create gigantic 2 player maps. The past shows that a map size of ~95x95 is the hard ceiling for competitive 2 player maps while ~110x110 is generally accepted for 4-6 player maps. Therefore, I welcome your approach in this direction.


My points of improvement:

Icons 13 Skins 2 Maps 20 Tutorials 1
Do you think the camps are too far away?
There's a 7 camp right in front of base, a 9 camp that consist of several smaller creeps and a 14 camp which can be crept with AOW/Rod/Milita.
None of them are particulary hard to creep or is hard on creepjacks.

The neutral building placement is an oversight, that i can fix.

The only RNG element (look aside this ^) is what shops you spawn closest to.
Sometimes you get lab/merc, sometimes shop/merc, etc.
Only playtesting will reveal wether this affects balance heavily or not.
I don't think it will be a major issue though since there's 2 of everything.
TM has poison, purge and other wierd shit.

Having seven lvl 18-19 goldmines which only become available in the lategame is kinda pointless. Either reduce the starting positions to ~lvl 13-14 or the middle goldmines to lvl 11-12. The green murloc spots in the middle would be adequate locations for red spots as a replacement (also making the middle area more attractive).
Click to expand...

Maybe spawns camps can be reduced 1-2 levels, though they aren't super hard to creep, but it's something i have to dwell on.
The distance works fine for milita, NE should have an AOW lying around for earlygame creeping, Orc should have some items/levels by then and UD has CL and plenty of rod opportunities.

I think the outside circle has enough functionality to warrant it's place.
It serves as a helicopter pad for warden, gargoyles, zeppelin, phoenix and other units that might have use of it.
The +2 tome drops can buff up blademaster or warden really quickly if theres downtime and their slots are getting full.
There aren't any maps i know of that has extra space behind bases.
It's a niche feature, but i think it adds some flavor.
It's not like it's a detrimental feature anyway to have that extra space.

I have fixed the neutral building locations if someone can fix enemy spawn priority (i'm using 1.31 editor).

Maps 10 Tutorials 1
Another good map. In reference to your most recent 0.3 version, I have the following notes:
1. Interesting idea with the market/taver center. I dont see any obvious downside.
2. The other rim probably wont see much action. The creeps are not rewaring enough. Also instead of 12 times the exact same time, there could be some variety.
3. At the starting positions, why are the ranged units placed in front of the melee units?
4. Itemdrops are generally good.
5. While I dont believe that the unavoidable asymmetry in neutral buildings/mine depending on spawns will be game deciding factor for team games, it might still cause some complaints from players.
6. For highlevel 1v1, I believe the randomness might unfortunately have too big effects. For example, if can happen that one player spawns near a mer camp and the other doesnt. This would be big advantage (yes this can currently happen, but I dont like it and I also dont think it will be accepted on new maps by competitive players).

Attached you can find a version with fixed ally/enemy priority settings. I assume you'll upload it, therefore map Approved in advance.