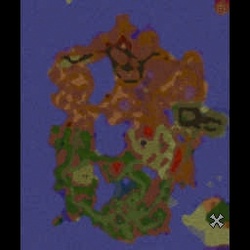 This is an AOS-Type map. It is inspired by maps like Cataclysm, JFA or Scars of War. My intension was to create a lovely looking and easy understandable map.
The two diffrent factions are Horde and Alliance.

1.) You select a hero and fight alongside units.
2.) On every route are control points. You get control if you destroy them.
3.) The goal is to take down the enemy boss to win.

Challenges
- Curse Of The Black Knight
- Don't Ring the Bell!


Balance / Ideas
Send me your suggestions about what you like or dislike.