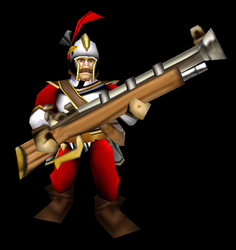 "Rank on rank they stood, presenting to the enemy the arms of Nuln and the roaring cry of the gun-lines."

This model is intended for use in warhammer maps, but I imagine given the flexability of a handgunner, it can find a place in almost any medieval-renaissance or warcraft themed map.