Reforged HD Models 1
Greetings, team of Warcraft 2: Chronicles of the Second War (CSW)! Your map of the Eastern Kingdom is amazing, one of the most accurate map of (the world of) Warcraft; with Northlands, moutains as from WC2... combinate with some WoW things like Gilneas, it's almost perfect... but some things are still annoying, especially Baradin bay, and Khaz Modan. Because back in Vanilla WoW, Blizzard wanted to expand KM, but they did it so bad that Baradin is now less than half of it's original size...

But we can change that pretty easily.

First, I have to tell you about this useless aera below KM, just at the north of Stormwind, which actually became a sort of trench after the Cataclysm, the "Deathwing scare" (they didn't even used it after Cata's alpha), so yes, it shouldn't be on your map... But we can do much more than simply replace it by the old (and still useless) moutains they placed here in Vanilla... We can use it to shift some KM's zones further south! And adding the fact that many aeras in the north around Gnomeregan are pretty useless too, we can gain so much place... for Baradin bay's resurrection!

So, you did Kul Tiras like on the WoW: Chronicles I Azeroth map, or rather, as Kuusinen's one. But this version of Baradin bay is not accurate at all, whether for WC2 or WoW; in fact even Chronicles III is more accurate with WC2 (for the scales), just compare them with the old WC2 map, or this other version, from Kuusinen again... and a good guy named Martin (see the next post).

For the rest, I think it's almost perfect, you should just care about Cataclysm's things, like the useless "Deathwing scare", or the collapsed area in the south of Gilneas (you should refer to Chronicles I or even WoW Vanilla for theses details); and also with some zone names, like Swamp of Sorrow, which is technically the northern part of the Black Morass before the southern became corrupted (as Duskwood for the south of Elwynn forest).

I always wondered what happened to Kul Tiras, and then I realized... but it was so long ago since Vanilla, and WC2... And then I discovered you yesterday, who are rightly working on the latter! And you motivated me, so I did my own version from your map. 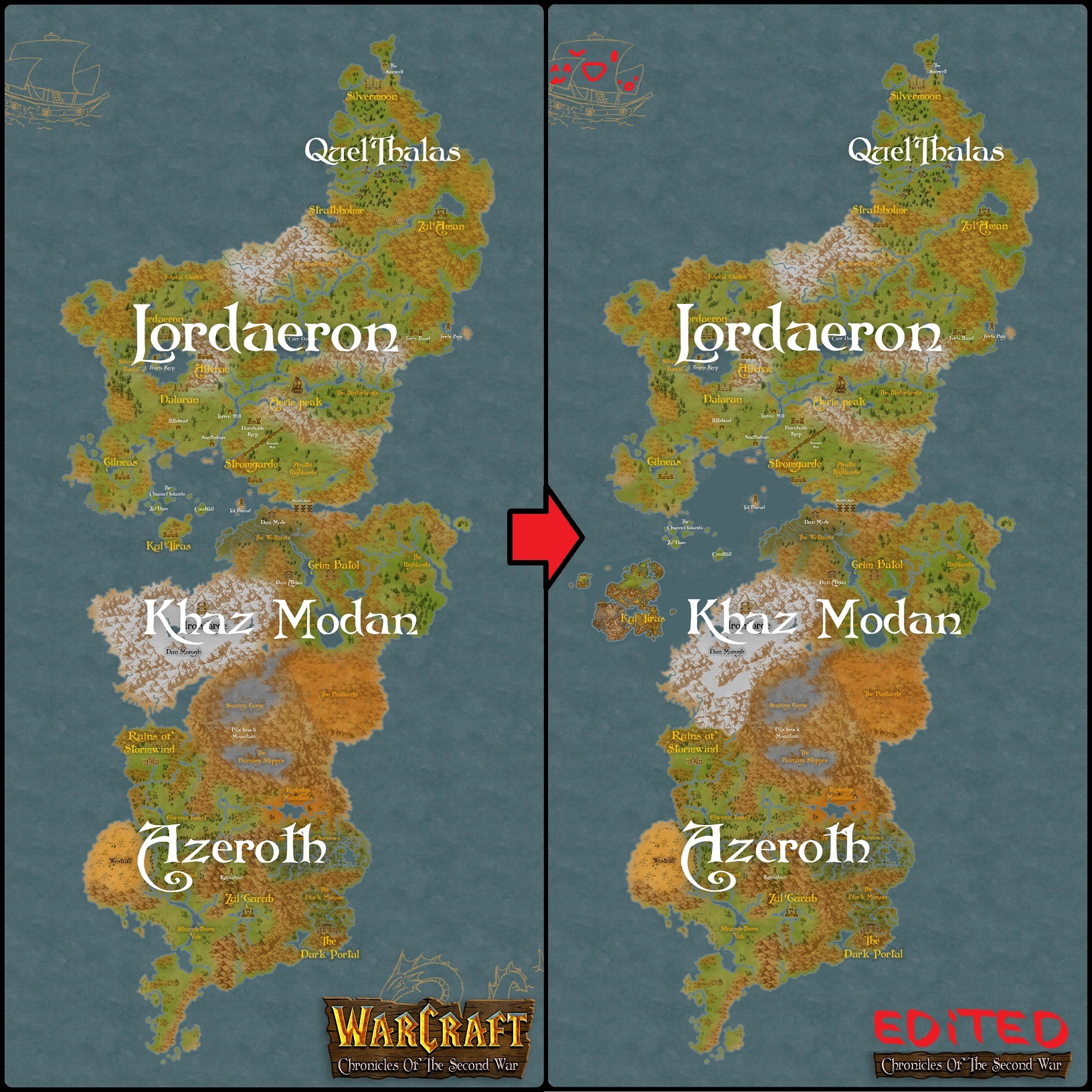 It's rough draft but it's the nearest translation of what I have in my head since I started working on Sturmbart's map. I just want to show what we can do to accord all these maps with the lore, so I took the opportunity of this project to move away a little from WoW maps and get closer to WC2.
(Here is a quick comparison between cities locations of WC2 map, Chronicles', yours and mine : 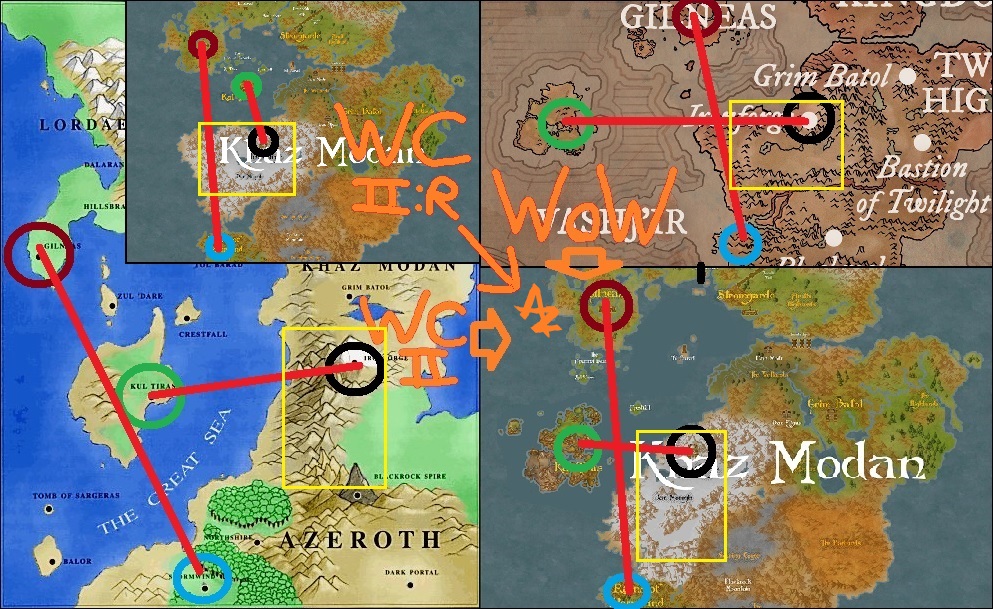 I am not an artist, and I know that your team is already working on in-game maps that must fit to WC2's ones, that I admit not knowing enough, especially how to move the islands (Here is a GIF showing several tries :

But anyway, I hope that my remarks and suggests will perhaps help you to improve even more your amazing work.

Reforged HD Models 1
So, I mentionned the second enormous map made according to WC2 from Andri (Kuusinen) and Martin, and this last guy, who was working on Warcraft maps for years, had another idea to improve this edited map... He just shifted all of Azeroth subcontinent a little to the east!
(The 3rd map below, with yellow)

It's very simple but it allows to fix a lot of things : We (almost) recover the north shore of Elwynn, and mainly, Blackrock Mountain is much closer to the sea, so we can keep the logic of the WC2 naval battle for the Blackrock Spire. (It reproduce a little the "Deathwing scare"... which actually had already been thought without Deathwing during Vanilla Alpha xD).

Here's an example of how the battle could happened: (Imagine it inverted with the mountain more to the south) 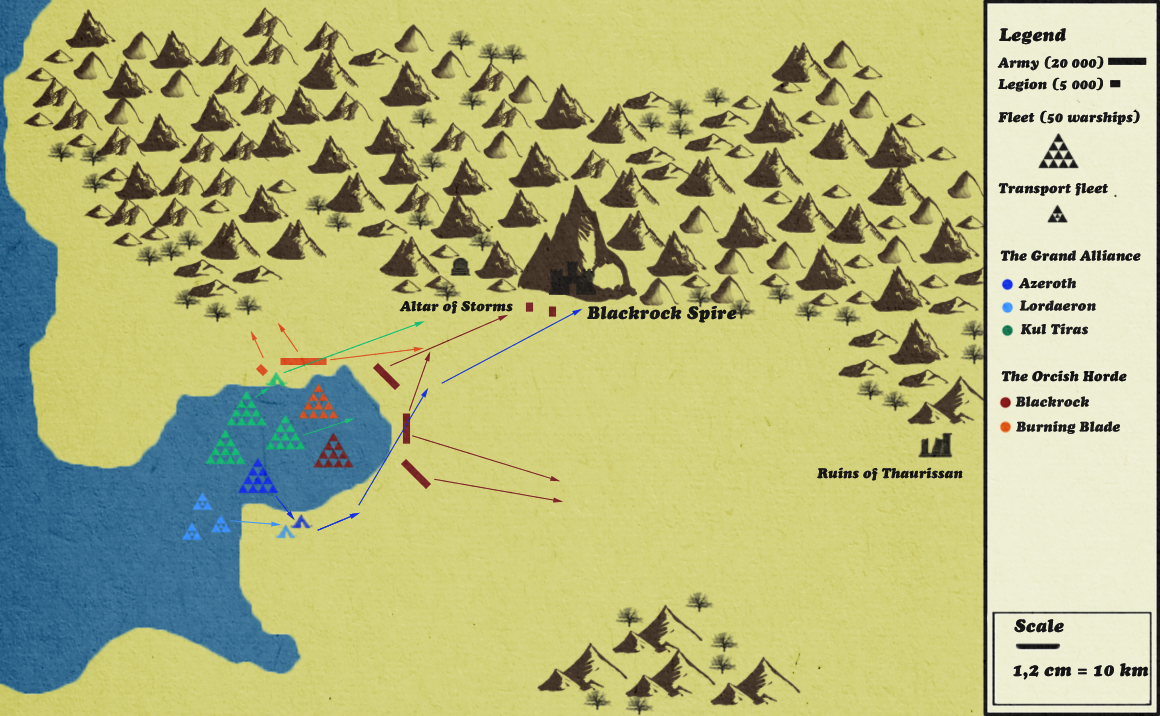 This change is very simple but it's a good idea because it doesn't remove anything, since there are not really many ways to travel on foot from Azeroth to Khaz Modan, but the Blackrock mountain itself; so the map fits much better with WC2, but at the same time we can keep all the new Khaz Modan (used) areas from WoW.

And then some random guy, called Malganyr, suggested to expand Lordaeron, to better surround Kul Tiras.
So I tried some versions... but finally, Azeroth subcontinent also has to stay big, so I only reduced the overall size of Khaz Modan, and I completely redone Martin's idea in the process for a cleaner version, half-way from the WoW version (I partially redesigned the access to Blackrock mountain and the shapes of the zones above) and there it is : (the blue last one) 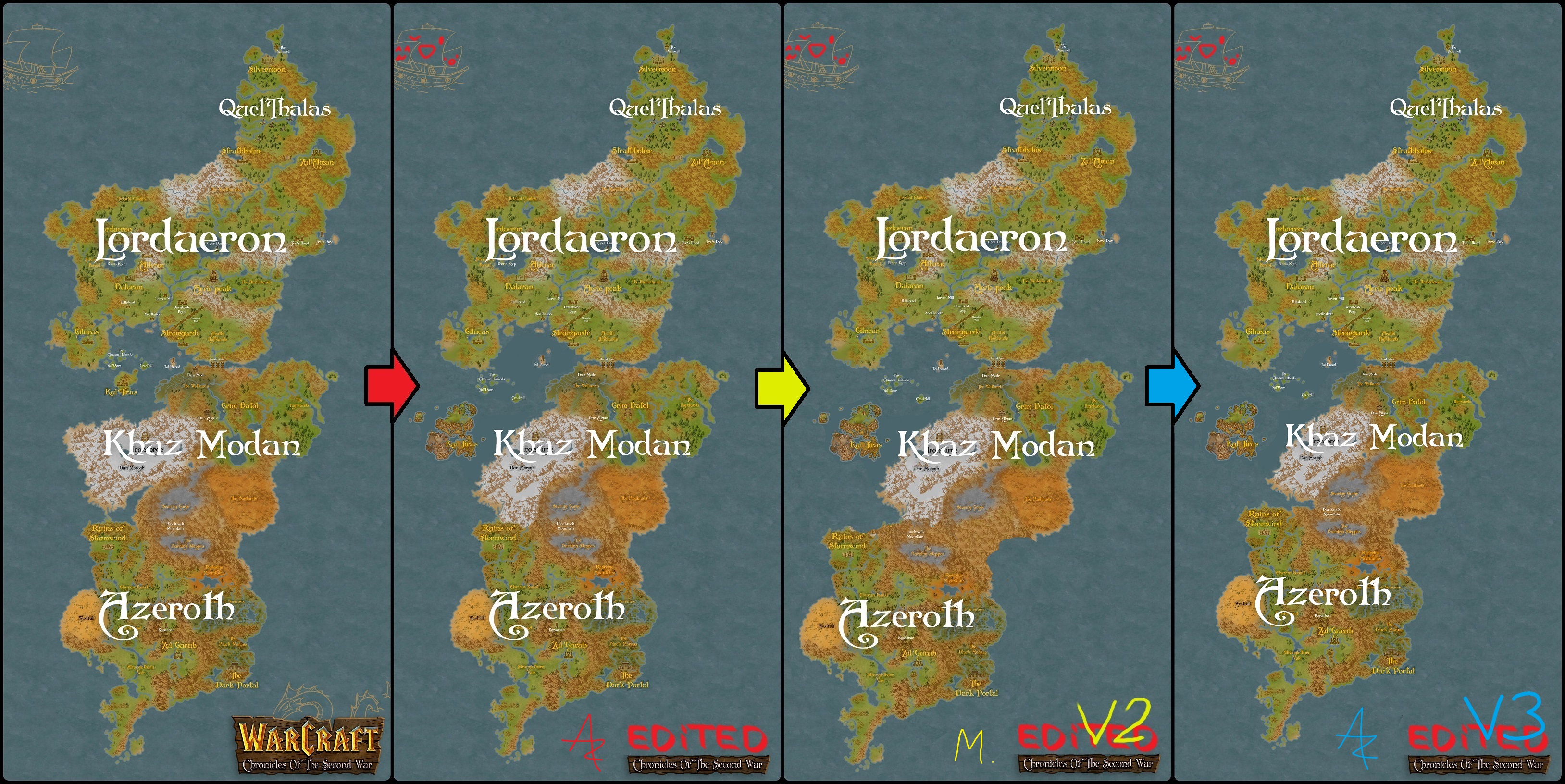 Reforged HD Models 1
So finally, ShadiHD released his last map, I think it's almost perfect and I love it, but I want to show how has evolved the lasts versions. I tried to find another shape for Kul Tiras, more in agreement with WoW (Yes, I love the sound... and say hi to Mechagon x) ). For this last one I just took the shape of Kul Tiras from the first CSW map to expand the WoW Kul Tiras at south.
Balor was also hard to place, and I don't know what could it be used for...

But anyway, now it's very good. 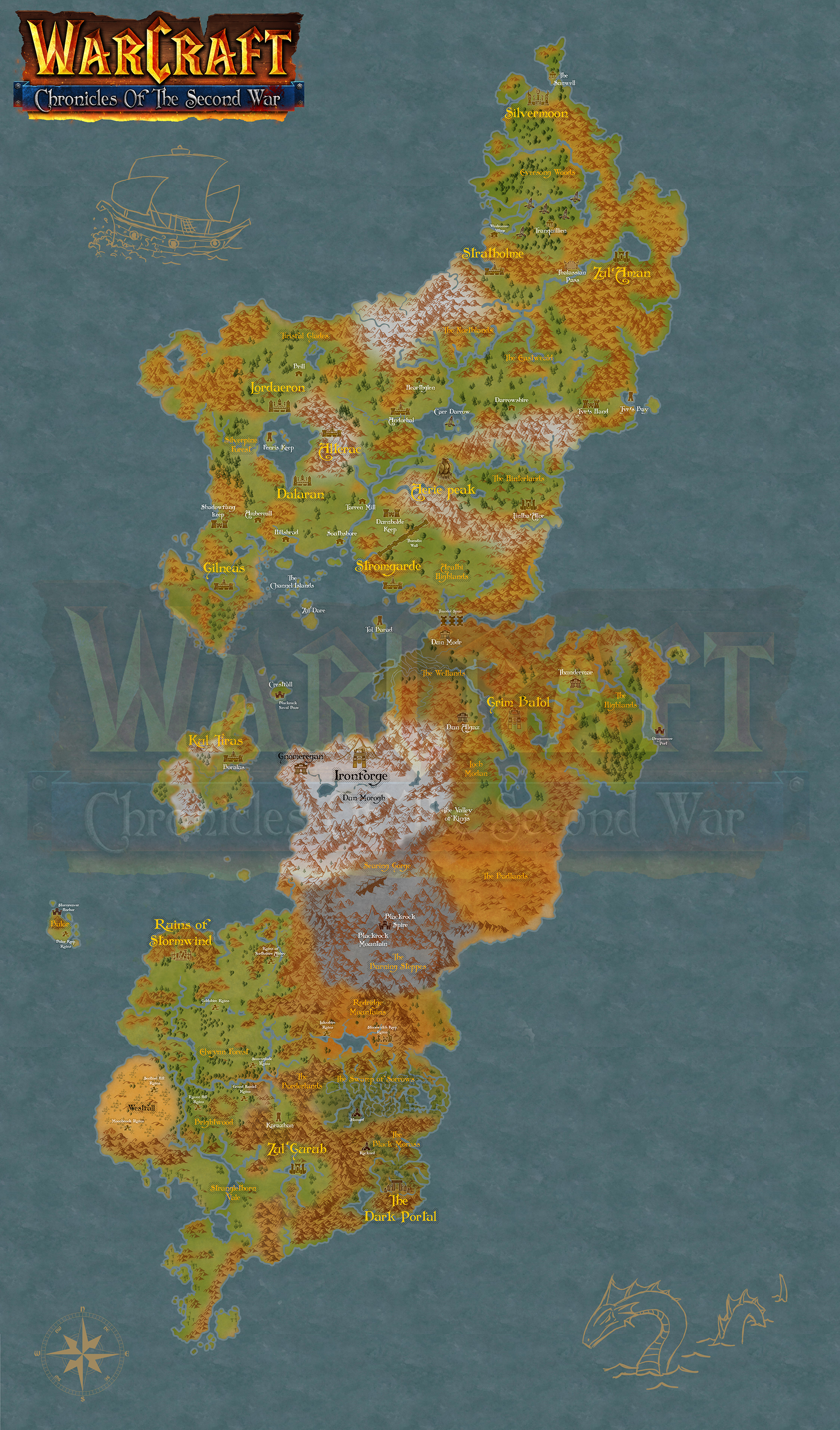